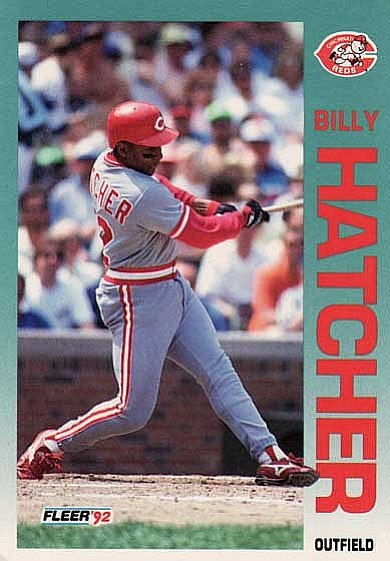 A Billy Hatcher baseball card shows the outfielder from Williams in mid-swing. (Photo/WGCN)

WILLIAMS, Ariz. – Billy Hatcher of Williams, Arizona is a nominee for the 51st annual Arizona Sports Hall of Fame class.

Nominees are voted on by the public, with voting underway through May 4 at www.azsportsent.com. There is no restrictions on how many candidates each individual may vote for, however, only one ballot can be cast per person.

Hatcher is perhaps the most famous ball player to hail from Williams.

Over the course of his 12-year career, Hatcher played outfield for the Cubs, the Houston Astros, Pittsburgh Pirates, Reds, Boston Red Sox, Philadelphia Phillies and Houston Rangers and hit a career .264 average.

Career highlights include Hatcher's dramatic home run in the 14th inning of game six of the 1986 National League Championship Series. The hit momentarily kept the Houston Astros alive in the series against the New York Mets, who later went on to take the championship.

The announcement for the 2022 class is expected to be made in June, with new enshrines honored at a gala in November.

ASEC is among the oldest sports commissions in the United States. ASEC operates as an independent 501c3 organization. Their mission is to represent the citizens of Arizona to bring sporting events to the state, assist in the promotion of existing events and support youth and amateur sports programs.