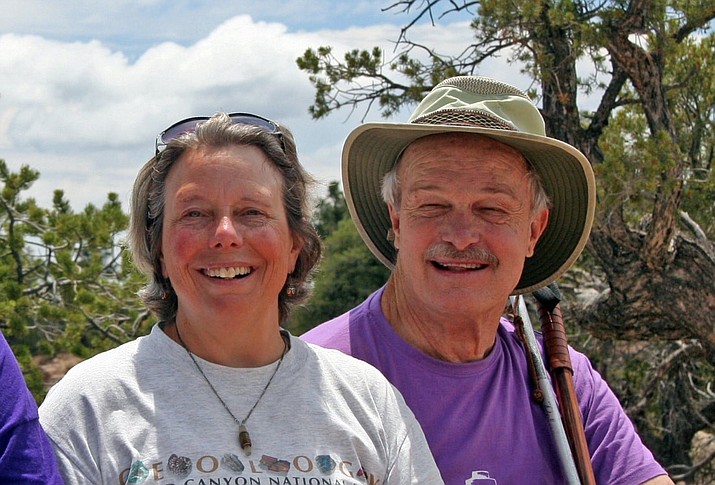 Nancy Green and her husband Keith were awarded the 2021 Grand Canyon Historical Society Pioneer award. Nancy was honored for her contributions to the Grand Canyon area. (Submitted photo)

Whether alone or with friends, Nancy was an intrepid explorer of the canyons, the mountains, the forests, and the deserts of the Colorado Plateau and beyond.

Her adventures included 17 trips down the Colorado River, numerous hikes to the bottom of the Grand Canyon and more than 100 miles of treks along the Arizona Trail.

In 2021, she and her husband, park ranger Keith Green, were honored with the Grand Canyon Historical Society Pioneer Award for their commitment to the interpretation, preservation and sharing of Grand Canyon’s human and natural history.

The couple had served the Grand Canyon Historical Society for nearly 28 years.

In addition to these contributions, Nancy spent time as both a special education teacher and school librarian at Grand Canyon Unified School District.

In 1996, Nancy was named Coconino County Teacher of the Year and in 2006 was named Follett School Librarian of the Year.

“And nearly every night, on her own time, she would run off to ballet classes, book clubs, writing groups, aerobics classes, Pilate’s sessions, local concerts and whatever else might pique her vast array of interests,” Piatchek said.

During summer breaks and in her retirement, Nancy and Keith, who is legally blind, would travel to urban and remote destinations around the world.

In addition to travel, Nancy was active in several organizations including the Grand Canyon Historical Society and the Arizona Authors Association. She also oversaw the construction of the couple’s home in Parks, Arizona, and wrote and published three books: a novel, a collection of essays about her encounters with wildlife and a children’s book.

“In 2017, Nancy began to exhibit some troublesome physical symptoms, and a variety of doctors would treat her for one issue or another, but unfortunately, the medical professionals kept looking at the parts and not the whole,” Piatchek said.

The next several years presented more and more challenges for Nancy and her physical abilities began diminishing. She saw more doctors — both at the Mayo Clinic and at Barrows Neurological Institute in Phoenix, and also at Banner Health (University Medicine Neuroscience Institute) in Tucson.

Nancy was eventually diagnosed as having multiple system atrophy.

“This was devastating news, as the prognosis was dire,” Piatchek said.

In 2021, Green moved into assisted living at the Peaks Senior Living Community in Flagstaff. It was there that she and her husband were honored with a party and presented the annual Grand Canyon Historical Society Pioneer Award.

“Many of us like to believe that she is now off somewhere dancing again— this woman who never let a dance floor go empty; who was the first to get out there as soon as the music started (with the hand of her blind husband in hers, leading him out beside her); and who was ever encouraging everybody else to get up and boogie, too,” Piatchek said.