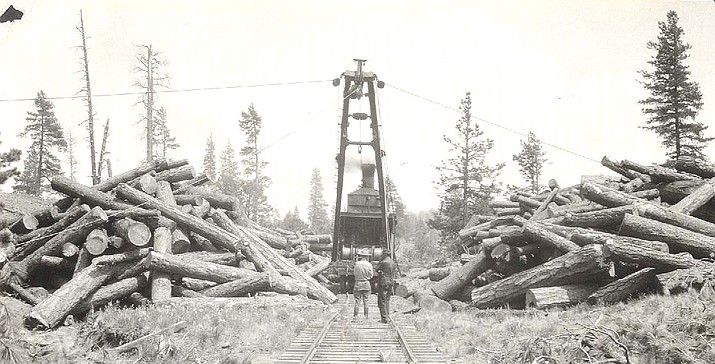 A steam skidder working on timber, cutting of which is being supervised by Forest Service by Roy Headley in July 1924. (Photo courtesy of Kaibab National Forest)

GRAND CANYON, Ariz. - Northern Arizona University’s (NAU) anthropology department in collaboration with Kaibab National Forest is making the historic Grand Canyon railroad more accessible to the general public and the next generation of archaeologists by opening an archaeological field school at Apex, a 1920s logging camp.

The school is anticipated to open next year.

“It started because I wanted to run a historical archaeology field school,” NAU professor Emily Dale said. “We picked a site that needed some work and further investigation — we started about two years ago and … our field work has been canceled for the past few years because of the ongoing pandemic so hopefully this summer we’ll be able to go out.”

Apex was named for its location at the 6,575 feet summit of the Grand Canyon railroad’s steepest grade. It was located behind the present day airport in Tusayan.

The logging camp was populated largely by Scandinavian immigrants while the railway was staffed by Native Americans and Latinos. Lumber harvested at Apex was then transported by full-gauged railroad to handle the sheer weight of the logs to the mill located in Williams. 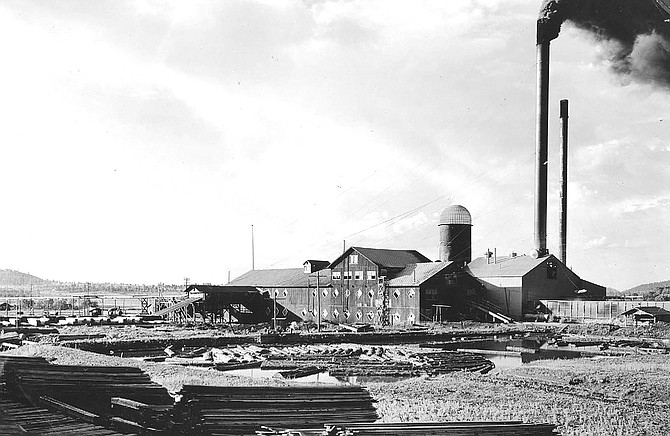 The Saginaw and Manistee Lumber Mill located in Williams, Arizona, circa 1939. The mill was closed around 1945. In 2022, Northern Arizona University and Kaibab National Forest plan to open a historic field school at Apex, a 1920s era logging camp near the Grand Canyon. (Photo courtesy of Kaibab National Forest, W.H. Shaffer)

Apex served as a hub of commercial and cultural activities for the Tusayan District from 1928-1936. It was also the headquarters of the Saginaw and Manistee Lumber Company from 1928-1936.

Lumber became a major industry of northern Arizona when the Atlantic and Pacific Railroad arrived to the territory in 1881. A combination of the industrialization of the American West meeting the largest contiguous ponderosa pine forest in the nation helped foster prosperity for companies such as the Saginaw and Manistee Lumber Company.

However by the 1920s, much of the southern half of the Kaibab had already been fairly logged out with most of the economically worthwhile material taken — that’s when the Saginaw & Manistee Lumber Company started looking at the Tusayan District.

“This is the last area that Saginaw and Manistee exploited,” said Kaibab National Forest Archaeologist Margaret Hangan. “The Grand Canyon Railroad made access to that area feasible. Now they didn’t clear cut, they took what they thought was marketable and actually left quite a few trees back for future growth and felt that they could do the North Kaibab.”

Apex differs from other extractive industry camps in the area in how long it was active and in its complexity of organization of its labor. Most camps were individuals or small groups who worked in the area for about five years until local resources were exhausted and or they lacked the capital to further expand their operation, according to Dale.

The comparatively long-term stay of the residents was seen in the fall of 1929 when a boxcar was transformed into a single-room schoolhouse.

Apex School District Number 3 was taught by Margaret Longley of Flagstaff. It was in session for grades one through eight, according to a report by historian Al Richmond.

“We had to have our fingernails clean and have a handkerchief,” said Longley’s student Anna Johnson in a 2013 interview with NAU. “Then we sang this little song, ‘Good morning to you, good morning to you. We’re all in our places with sunshiny faces.’”

Unlike the majority of schools in Arizona at the time, those “shiny faces” were not segregated by race.

“At least not as far as we can tell,” Hangan said. “For school populations where they had very few children of color they basically taught them together.”

“Simultaneously it’s so permanent,” Dale said. “We’re going to be here as long as the contract and lease is going but also we need to be able to pack up. So it’s sort of an oxymoronic relationship to the landscape and the railroad.”

Area development is a concern for Apex’s preservation, according to Dale, and juggling multiple threats to the site is a challenge. For example, thinning the forest around Apex protects the site from fires, however, it exposes more of the ground and artifacts for looters to see.

While the company sold canned goods, tobacco and other goods to workers by deducting from wages, and made each worker supply their own wooden wedges to bring down the trees those consumed bottles and containers are now absent from the site. Looting of artifacts is the gravest concern facing Apex, according to Dale, with a wealth of information about local’s ancestors already forever lost by passersby picking up a souvenir.

“A lot of people are quite familiar that looting a prehistoric site is illegal,” Hangan said. “People are less aware that looting historic sites is also illegal … there’s another challenge around the messaging.”

The removal of artifacts removes the ability to answer many questions about a given site, Dale said.

“Whole alcohol bottles are gone now, which kind of told us about little stories of people visiting company town rules,” she said, offering another example of how information is lost. “Aspirin bottles could tell us how people were coping with the pain of working so hard.”

The Apex project has received a $4,540 grant, and an extension because of COVID-19 from Arizona Humanities, to staff a small temporary information booth, hire a graduate assistant to assist with public outreach, produce educational materials and provide portable toilets at Apex.

The site is anticipated to open in 2022 with the start of a U.S. Forest Service “Passport in Time” program, where the general public can sign up to be volunteer tour guides at the site.