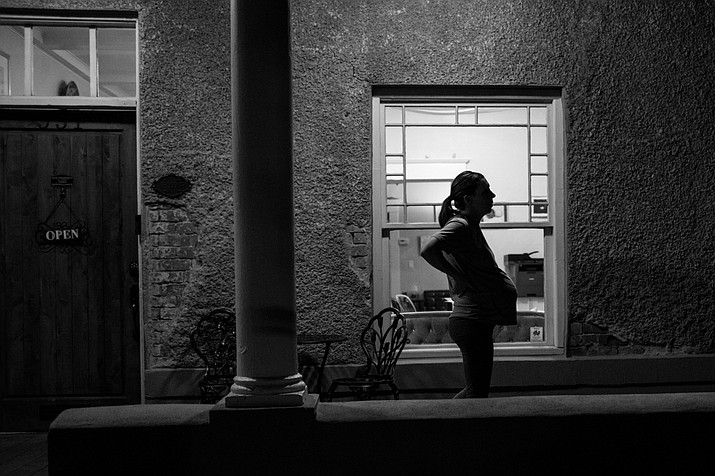 Maternal health advocates in Arizona are working to bring more attention to a leading cause of pregnancy-related deaths: conditions related to mental health. (File photo by Nicole Neri/Cronkite News)

PHOENIX – Sarah Barrett knew something wasn’t quite right after her first two children were born. She felt depressed and not as attached as a mother might be to her newborn.

Then, in 2013, her third child arrived a few weeks early and had to be intubated for two days to help him breathe. Barrett felt like she’d let her family down, and things just spiraled from there.

She spent the next few years struggling with undiagnosed perinatal mood and anxiety disorder, and her condition deteriorated to thoughts of suicide before she sought help.

“At the time, I didn’t have a very good support system in place,” Barrett said, “and so I kind of withdrew and hid all of the feelings that I was having, which makes it worse if you don’t talk about it.”

Her mental health took a turn for the worse on her son Kellen’s second birthday, when Barrett learned her best friend had died from a brain tumor. That’s when she began thinking about suicide.

“And that’s when I knew that something was really wrong.”

The national conversation around maternal mortality has served to spotlight preventable physical complications, such as cardiovascular issues, but it often overlooks a leading cause of pregnancy-related deaths: conditions linked to behavioral health.

Recent studies have found that suicide, overdose and other problems that fall under the larger umbrella of mental and behavioral heath account for a significant number of deaths among new mothers.

Data from 2008-17 from Arizona and 13 other states found that cardiovascular conditions were the leading cause of all maternal deaths, responsible for nearly 14% of fatalities, but mental health-related conditions – including suicide, substance use and accidental overdoses – were to blame in nearly 9%.

The report cited four main factors that contributed to all 134 pregnancy-related deaths during those years: continuity of care, communication, assessments and clinical skill or quality.

The Centers for Disease Control and Prevention defines a pregnancy-related death as the death of a woman during pregnancy or delivery – or up to a year postpartum – from a complication, a chain of events initiated by pregnancy or the aggravation of an unrelated condition.

About 700 women die each year in the U.S. as a result of such problems – and the numbers are increasing, even though the vast majority of these deaths are preventable, according to the CDC. Black and Indigenous women are two to three times more likely to die than white women.

The numbers, said Arizona therapist Cara English, speak “very strongly to how vulnerable women’s mental health is in the year after she had the baby. It can also be viewed as a failure of our society to support women, and making sure that they have what they need both from a nourishment perspective and all around.”

English has 20 years of experience in psychology, counseling and integrated behavioral health care and is a member of several maternal health committees across the state that are trying to find ways to combat these deaths.

In 2016, she co-founded Terra’s Place to provide behavioral health support for postpartum mothers and their spouses or partners. Although the organization is not taking new patients, its website provides resources for moms who need help.

One of the biggest challenges, English said, is recognizing the signs of perinatal mood or anxiety disorders and getting a correct diagnosis and appropriate care; there also are differing degrees of these problems.

Postpartum depression goes beyond the normal exhaustion or so-called “baby blues” that a new mom might experience, and symptoms include anger, withdrawing from loved ones, feeling distant from the baby and doubting one’s own ability to care for the child.

CDC research finds 1 in 8 women experience symptoms of postpartum depression, and those diagnoses are increasing. Nevertheless, 1 in 5 women report not being asked about depression during prenatal visits, and 1 in 8 say the subject wasn’t raised during postpartum visits.

Postpartum psychosis is a more severe illness that occurs less often. Symptoms include delusions, rapid mood swings and suicidal ideations. English said it is oftentimes hard for families to identify because symptoms tend to wax and wane frequently.

“Sometimes that sudden change in behavior or thinking leads to, ‘My baby would be better off without me,’ which is a negative thought but it can also be out of touch with reality,” English said. “Any woman who looks at her child knows a child is best with his or her mother. So, it can become confusing. … For a person who’s impulsive, suicide is always a risk.”

English said if a woman has had a previous perinatal mood or anxiety disorder, the recurring risk and severity can increase with each pregnancy. 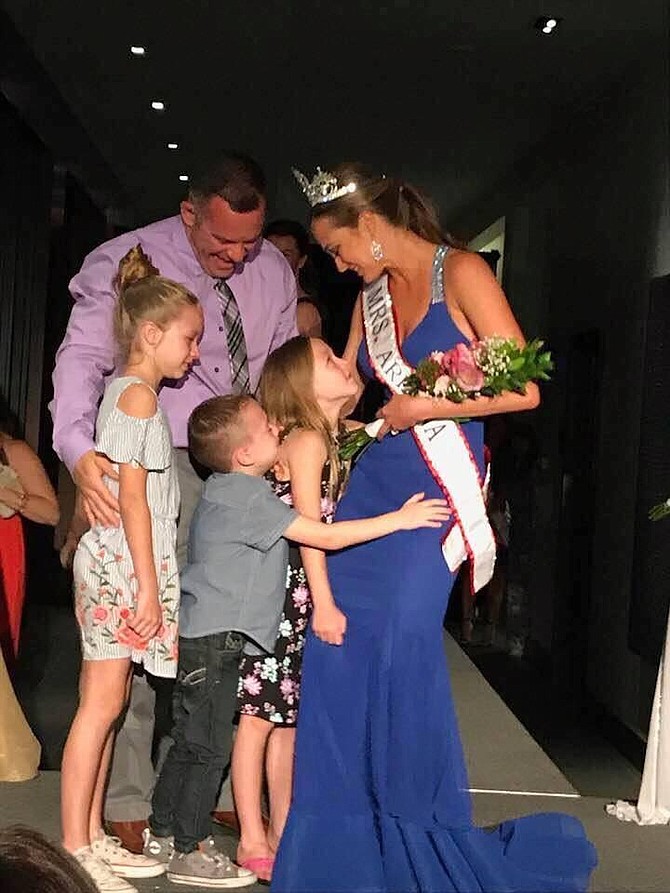 The COVID-19 pandemic has also contributed to worsening mental health among mothers. One study found a 43% increase in pregnant women or women in their first year after delivery reporting symptoms of anxiety; reports of depression rose nearly 26%.

Yet another survey found that 74% of moms in the U.S. said they felt mentally worse since the beginning of the pandemic in March 2020.

“We definitely want moms and families to know what the signs and symptoms are and how and where to get help, as soon as possible,” English said, stressing that mental health conditions are “the most underdiagnosed, underreported and undertreated complication of childbirth.”

The push for more help

Medicaid is the largest single-payer of maternity care in the U.S., but until recently, postpartum care was not covered beyond 60 days after delivery. In March, President Joe Biden signed the American Rescue Plan, part of which allows states the option to extend that care to 12 months after giving birth.

Twenty-five states have taken action to approve the extension, Arizona has not, according to an analysis by the Kaiser Family Foundation.

“I don’t know that it’s a priority in our country right now,” said Jennie Bever, president and CEO of 4th Trimester Arizona, a nonprofit that helps women and families with the transition into parenthood.

“We care about maternal mortality, but that’s a little late. We need to actually care about whether or not they’re OK before they die or before they decide to commit suicide.”

Experts estimate that as many as half of the women who experience mood or anxiety disorders during pregnancy or postpartum go undiagnosed because there are no national, evidence-based guidelines specific to these conditions and screening too often isn’t a regular part of postpartum care.

The American College of Obstetricians and Gynecologists recommends that providers screen patients at least once during the perinatal period for depression and anxiety symptoms using a tool such as the Edinburgh Postnatal Depression Scale, which includes self-assessments in 10 categories, including: “I have been anxious or worried for no good reason.”

But even those surveys aren’t foolproof.

After Bever gave birth to her youngest child, a son who’s now 6, she was in denial about having postpartum depression, so she lied on her screening test. She was worried about being stigmatized or someone thinking a mom who has mental health concerns may be unfit to care for her child.

“We’re all worried someone’s going to take our baby,” she said.

4th Trimester Arizona is just one group trying to help at the grassroots level. It holds monthly events within its four “villages” – or communities of support – in the East and West Valley, Mesa and Tucson. Activities include meditation, art therapy or yoga to create a sense of community and encourage bonding.

CEO Enjolie Lafaurie said the idea for the collective began when co-founder and Indigenous chef Maria Parra Cano felt isolated and depressed after the birth of her second child and the death of her mother.

Women started meeting for coffee to provide support for one another. Lafaurie said they were all “Indigenous women trying to be moms and figure out life.”

The founders started healing themselves first. For Lafaurie, this meant dealing with the deaths of her husband and father, who died two days apart six years before the collective began.

When the labor and delivery unit at Phoenix Indian Medical Center closed abruptly last year, the collective stepped in to help families. It also has a community garden that has helped feed thousands during the pandemic, Lafaurie said.

“Birthing is one day, but a person is pregnant for nine months,” she said. “And for anyone who does postpartum care, you’re supporting someone for up to a year postpartum. Food … and nourishment is such a big part of that.”

Although the mainstream medical community uses such tools as the Edinburgh scale to screen mothers for postpartum mental health disorders, Lafaurie said her staff members do not follow a specific screening process because they “take people at face value.”

“I can’t ever see somebody coming to the collective, calling us and asking us for help, and us providing them a piece of paper to fill out first. That’s not how we operate,” she said.

“It’s not that we are the breath of fresh air. We’re the little cog, the little piece, that little prayer, that connection that somebody prayed for seven generations ago. Their ancestors asked, ‘I just want my daughter, I just want my family member to one day have some help.’

A mom speaks out

In time, Sarah Barrett got treatment and got better. But she knows that far too many women do not.

Barrett, who lives in Tucson, found help with Postpartum Support International, reached out to friends, prioritized her physical health and started going to individual and couple’s therapy to improve her mental health.

Then in 2018, at age 35, she entered the Mrs. Arizona America Pageant and won. As part of her duties, Barrett spent the following year advocating for a cause – her topic was perinatal mood and anxiety disorders.

“Being able to share my story and feel like I was using the pain that I had been through to help other people was when I really felt like I turned the corner and started to get a lot better,” she said.

Barrett still advocates for the cause but now spends the majority of her time working to become a psychiatric mental health nurse practitioner, which is her long-term way of giving back. She has talked with her three children about some of what she went through, and they know she’s back in school because she wants to help others.

“They know that I want to continue to help moms that are feeling sad,” she said.

“What we really need is to go through it together.”