Paving to begin on Garland Prairie Road and Route 66 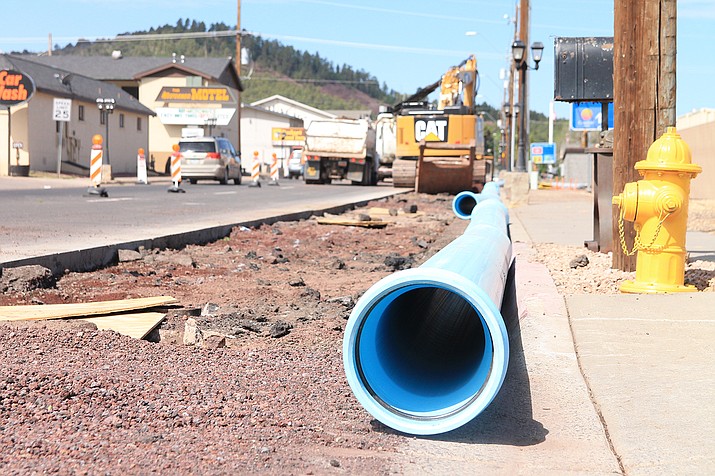 A new section of pipe for the Dogtown water line is installed in downtown Williams. (Loretta McKenney/WGCN)

WILLIAMS, Ariz. — Residents and visitors to Williams will soon see new pavement on Route 66 and Garland Prairie as pipe-laying for the Dogtown Waterline project has been completed in these areas.

Residents who live in the Woods Subdivision in Williams have dealt with severe potholes and dusty cars on their commutes this summer, and visitors and downtown employees have been mildly inconvenienced by the pipe-laying project.

B4 Enterprises finished laying pipe on South Garland Prairie Road and Railroad Avenue and have begun prepping the streets for new pavement.

“They should begin in the next few weeks and they plan to be done by the middle of October,” said Williams Public Works Supervisor Aaron Anderson.

Anderson said the company will begin laying pipe between Bearizona and the eastern edge of Williams, however, he said it shouldn’t impact traffic.

The company also has to work around closures in the forest because of goshawk nesting.

B4 Enterprises has been hopscotching the new lines from Dogtown Reservoir to the city of Williams as they work around wildlife closures and the busy summer tourist season.

The company is laying down sections for two lines — one for well water and one for reservoir water.

Construction crews made significant progress through the mild winter and spring bringing the two new water lines from the Dogtown wells through National Forest and private lands into Garland Prairie.

The project is funded by a $15 million WIFA loan previously authorized by the city.

The Dogtown transmission line is estimated to be 86 years old, with a history of ineﬃciencies, breaks and leakages. It runs through the Kaibab National Forest and carries 80 percent of the city’s water supply. The pipeline needs to be replaced to reduce water loss, according to the city.