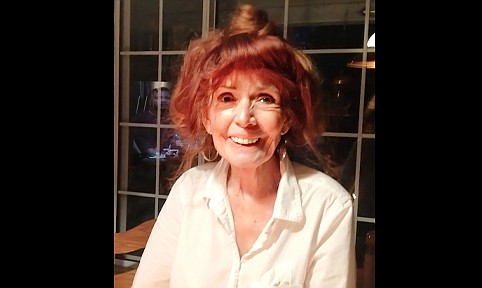 Ann Marek, nee’ Naomi Whitted, passed away peacefully at home on the morning of September 2, 2021, just 10 days before her ninetieth birthday.

She was born in Wichita, Kansas on September 12, 1931 to John and Enola Whitted. Together with her parents and older brother Jackie she moved to Williams as a child, where her father ran the gas station in the building that later became Old Smokey’s restaurant.

Attending school here, she became Williams High School alumni with the class of 1949. Shortly afterwards, she married Clifford Oberg of Parks, AZ and over the next 10 years they had two daughters, Brynn and Laura, and moved between locations in Williams and Cottonwood.

After their separation, around 1960, Ann moved with Brynn and Laura to Albuquerque, New Mexico. For a time she worked as a waitress in the Summit House restaurant on Sandia Peak, riding the gondola to work every morning.

Brynn died in April of 1977, and after many years away, Ann returned to Williams in 1983 with her husband Frank, to purchase her dream home. She and Frank became a fixture in the area for over 25 years until his passing in 2009.

Since then she has lived by herself, valuing her independence and her peaceful surroundings. She enjoyed playing the piano for the church choir, decorating her home, drawing sketches and visiting with her family.

She is survived by her daughter Laura and son-in-law Kent and her three grandsons; Christopher, Brian and Stephen.

Graveside services were held Saturday, Sept. 11 at the Williams cemetery.