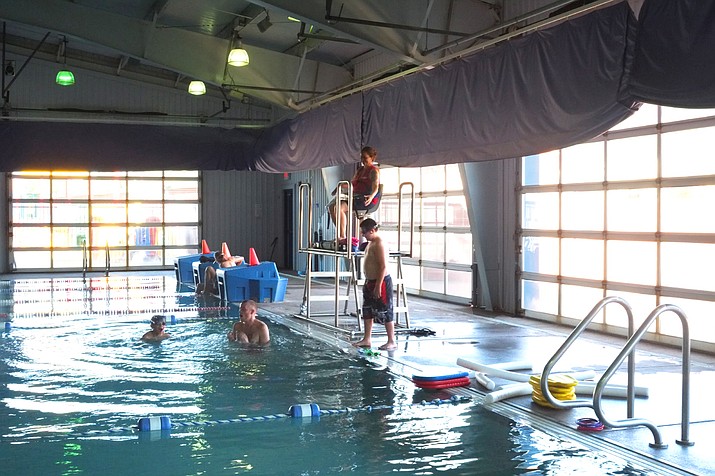 The Friends of the Williams Aquatic Center continues fundraising to reopen the facility. (Loretta McKenney/WGCN)

WILLIAMS, Ariz. — Friends of the Williams Aquatic Center (FWAC) is on a mission to reopen the pool that has been closed since the end of the summer season in 2019, but is also seeking the public’s input on what the community would like to see happen with the facility.

“We want to show the city (council and staff) how important the pool is to this town,” said FWAC member Jeana Stevenson.

The estimated cost of operating the facility fluctuates with estimates of $100,000 to $300,000 per year, and the facility needs some infrastructure repairs with the ventilation system.

“We have been working on getting grants for the past two years, but since its infrastructure it makes it more difficult,” Stevenson said. “We are working on applying for a T-Mobile grant now.”

The Friends group is working with the city to determine the cost of repairing the ventilation system, and is currently working to raise money through donations and grants.

“We told the city our goal was to raise at least $50,000 of the cost,” said FWAC member Kathy Bates.

The group held a campaign earlier this year through Arizona Gives and raised $10,000 toward the repairs.

“We want to hear from people, because who knows, maybe what we think is important isn’t quite as important,” she said. “Maybe there are other things that are more important.”

The pool has been closed since 2019 because of concerns of the spread of coronavirus and needed repairs for the ventilation system.

FWAC is conducting a fundraising drive to raise money for the HVAC repairs and is looking at grant opportunities.

The group has also recently compiled a survey to solicit input about the best uses of the aquatic center.

In the past the group has successfully lobbied to keep the pool open five-days a week for the 14 weeks each summer.

The summer season is a flurry of swim lessons, open swim, lap swim and other activities.

The group would ultimately like to have the aquatic center open year-round.

“Until COVID came up, I believe they (the city) was getting serious about getting it open full time,” Bates said..

The group has met with city staff and councilmembers about options for funding the repairs and operational costs.

History of the Friends

In October of 1999, the Williams city manager signed a participation agreement with Arizona State Parks Heritage Fund to accept a grant that would enable the city to replace their existing but aging outdoor pool with a new aquatic center costing just over $1 million. Half the cost was paid by grant money, the other half paid by the city and community donations.

Williams was eligible for a covered pool because of the cold northern Arizona winters.

Prior to receiving the grant, the city sought input from the community about what types of recreation opportunities were desired.

The city surveyed 106 adults and 310 youths and found that the adults preferred swimming, walking, running and rodeo activities. The youth favored swimming, basketball, baseball and volleyball.

The pool opened in May 2001 with swimming and other aquatics activities accessible year-round, with early morning lap swim hours and open swim time. There were also community swim parties for family celebrations at Halloween, Christmas and New Year’s Eve.

In 2008, recession hit and the community suffered a severe drought. The Williams City Council considered draining the pool, however, several residents strongly advocated against draining the pool. The Friends of the Aquatic Center was organized and stressed the benefits that a pool brings to a small town and strongly encouraged the council to keep the pool open in the summers.

The group was able to raise the money to keep the pool open a few weeks each year and it has remained open each summer since 2011.

Money raised by the Friends of the Williams Aquatic Center has gone toward free swim days, swim lesson scholarships, passes for low-income families and extension of the swim season.

The group also prints copies of the pool schedule each year and has purchased patio furniture, a treadmill, a music system, a TV and a climbing wall.

To donate to the Friends of the Aquatic Center, visit azgives.org/FWAC. Anyone interested in joining the group can contact the Williams Recreation Center at (928) 635-1496.