Firefighter, actor and entrepreneur, Ash Fork’s Cris Acosta is not afraid to try his hand at anything 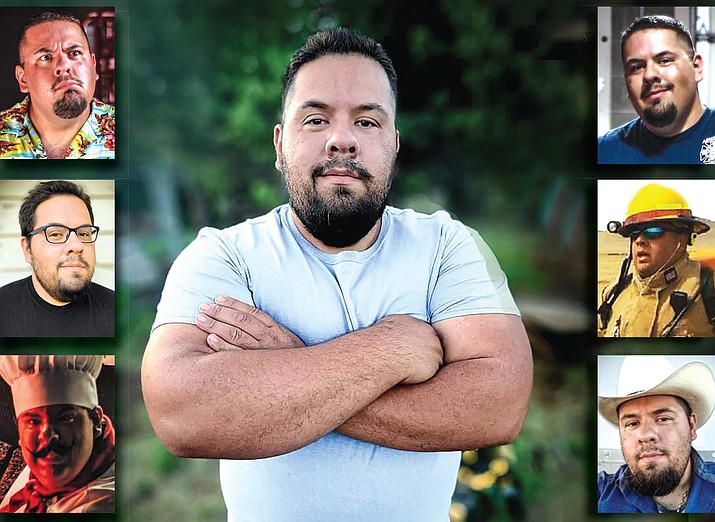 Cris Acosta was born and raised in northern Arizona and is pursuing a career in acting. He is also a volunteer firefighter, entrepreneur and full-time employee of Ash Fork Unified School District. (Photo courtesy of Cris Acosta)

Many in the Ash Fork area know Cris Acosta, whether it’s as a firefighter, actor or craftsman. He is a man who doesn’t sit still and loves to try new things.

Coming from humble beginnings — a product of immigrants, a student with learning disabilities and a child of a broken home — Acosta has met each challenge with fortitude and humor, and created an interesting life.

Born in Prescott, Arizona in December 1987, Acosta was the fourth child in a family of five.

Years ago, his family escaped a dangerous life in Agua Prieta, Mexico, a small border town near Douglas, Arizona, for a better life in the United States.

His parents grew up together, and when they acquired visas, moved to Perkinsville, Arizona and then Sedona before landing in Ash Fork, where Acosta was raised.

Attending Ash Fork schools from preschool through graduation, Acosta described himself as an awkward child.

“I was nerdy, a little bit more off than the other kids were,” he said. “I never really noticed it until I got older and then I was pretty bummed.”

Acosta was diagnosed with a learning disability and struggled to learn to read. The school sent him to ESL classes, which didn’t help.

“I knew English and Spanish, so I don’t know what the heck I was doing there,” he laughed.

Acosta grew up in a Spanish speaking home, and learned English through movies and television.

In his own words:

All of us have been around people who told us our dreams weren’t possible — let that add fuel to your fire.

If you decide to go and pursue your dreams, you will give hope to others who Want to do the same. You can serve as their example and their reason why they should give it a try. You can help them, coach them and encourage them to keep going.

Life is short. Our days are numbered, so why spend them doing something we don’t love?

It’s time to make a decision to go for it. Dream big. Focus on your dreams. Make your dreams happen. Remember there is nothing wrong working a regular non-related job while you are pursuing your passion.

I am happily working at the Ash Fork Unified School District to pay the bills but I am working really hard toward turning my passion into revenue, so that I can keep doing what I love.

I am still young, but I’m no spring chicken. I can tell you this, there is a difference between jumping off the plane screaming and yelling without a parachute and jumping off with a parachute secured on your back. If you are going to pursue your passion just be smart about it and stay strong and never give up.

Through middle and high school, Acosta was brought up to believe that there was something wrong with him.

“I struggled a lot in math and English,” he said.

Where Acosta excelled was art, becoming proficient with drawing and graphic design.

He also found an escape by watching VHS movies — such as ‘Jurassic Park,’ ‘ET’ and anything that was on TV.

In addition to the struggles at school, tension was high in Acosta’s home. His parents eventually divorced when he was in high school,

“On top of my struggles at school, I’d have to see my parents fight when I got home,” he said. “I always tried to be there for my little sister because it affected her a lot.”

Despite the pressure from his parents to excel, Acosta found a love of movies and make believe.

His father’s gift of an old camcorder helped changed his life.

“I wish I could have more support from my family — my mom and dad,” he said. “They worry about me and want me to have a solid job and find a nice girl. They’re just confused at where I’m at in life.”

Acosta credits many mentors who helped him navigate each step of his film career, which includes several acting coaches and film instructors.

“You have to push the negative people out sometimes so you can pursue what you want to do,” he said. “If you listen to naysayers you can start to believe them.”

He found strength in their words.

“They said if you want to do this for a living, you’re going to really have to give it 100 percent. You either go all in or you do something else that has nothing to do with what you want to do,” he said. “It’s always in my mind that this is what I want to do.”

He began to focus on his acting in 2011, taking classes in Sedona and at Northern Arizona University.

However, when he realized the classes weren’t what he expected, he decided to take a break and pursue another passion.

“That’s when I got involved in fire,” he said. “A couple of buddies knew I was down and they invited me to a fire meeting.”

A few months later, in 2013, Acosta signed up as a volunteer firefighter with the Ash Fork Fire Department.

He said becoming a firefighter had never crossed his mind.

“Not at all,” he said. “It was just something new that popped up.”

He was given a radio and told they needed some help.

“I thought, ‘Whoa, well that’d be cool, I like helping people,'" he said. “I walked into the station where all the engines and tenders and fire gear was at and I was like, 'Wow, there’s more to life than just film and acting and art.'” 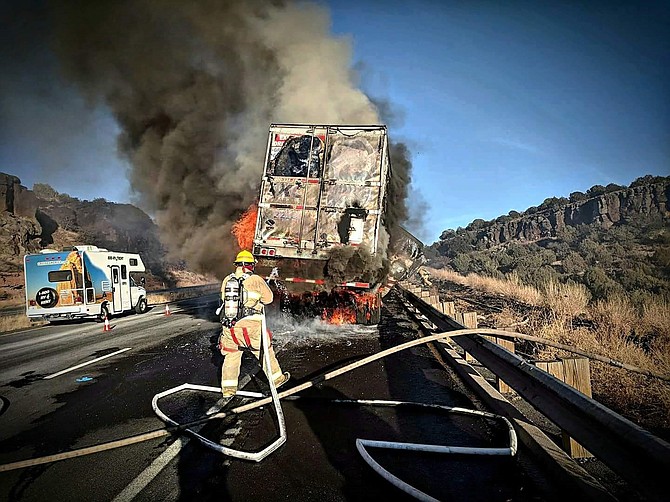 Cris Acosta responds to a semi on fire on Interstate 40 with Ash Fork Fire Department. (Photo courtesy of Cris Acosta)

As a town with a population of just 700, Ash Fork’s call volume is not large, however, the department responds to traumatic calls on Interstate 40.

Acosta's first call was to a semi rollover on I-40. The driver was pinned and he was able to help.

“I saw a group of people helping and being a team together,” he said. “I thought that was cool as heck. When I got back from the call they asked if I was OK and when I got home I thought, ‘Maybe I want to get more involved.’”

Acosta decided to get his EMT certification and began working toward his firefighting and Hazmat certification.

Another life changing event occurred later that year when Acosta attended the memorial service for the Granite Mountain Hotshots in Prescott Valley.

“There were so many firefighters, so many people in the Prescott Toyota Center,” he said.

Acosta said it was an eye-opening experience, one that made him realize the type of life and death situations you can face in the fire service.

While firefighting Acosta put his acting career on hold, but an opportunity presented itself where he could combine both of his passions.

“That’s when I found out they were going to be filming ‘Only the Brave’ about the Granite Mountain Hotshots,” he said.

Acosta knew he needed to be a part of that film.

He reached out to the New Mexico acting board, explaining that he wanted to be an extra on the film. Because he was out of state, they told him ‘no.’ But Acosta persisted — even offering to work for free.

The agent told him to show up at the film location and they’d figure something out.

“I was the happiest guy ever,” Acosta said. “What’s crazy was after I was done, I got to see Josh Brolin and all the original buggies and vehicles. I decided that if there was some way that I could get involve with filmmaking and still do firefighting, that’d be awesome.” 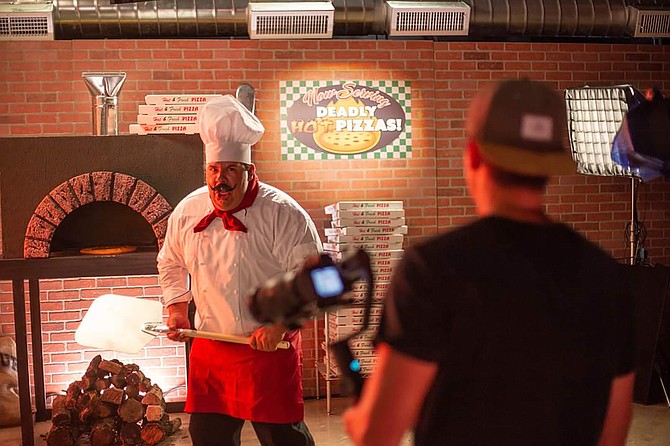 Shortly after filming of ‘Only the Brave’, Acosta was cast in ‘Fronteras,’ an independent feature film. He then tried his hand at comedy.

“I was always a fan of watching Chris Farley and John Candy,” he said. “I like playing a lot of different things — I’m interested in all of it really.”

Acosta is waiting for the release of ‘A Christmas Journey’ and ‘Rescued’, which are slated for this fall.

“They’re both faith based films, which is really cool. I’ve always acted in films that are not religious,” he said.

In ‘Rescued’, Acosta plays an EMT supervisor and in ‘A Christmas Journey,’ the son of a junk-yard owner.

“I like seeing things being created and I then being able to see them on the big screen is really cool also,” he said.

When Acosta isn’t preparing for an upcoming role or going on fire calls, he can be found at his workbench, creating laser engraved wooden flags. 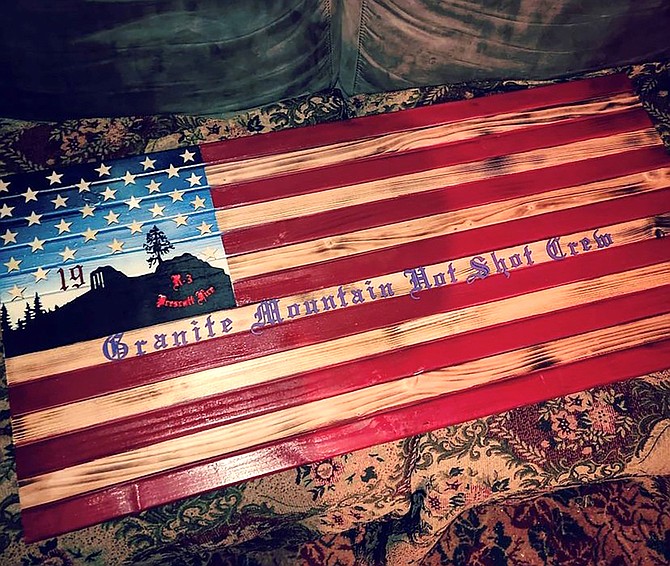 Cris Acosta makes laser engraved memorial wooden flags. In the last several years he has made around 300 flags to sell or donate. (Photo courtesy of Cris Acosta)

“I originally got into making memorial flags for wildland firefighters, firefighters, police officers and to commemorate 9/11,” he said. “I like having these flags to help people remember these heroes or specific moments in time when people have done acts of bravery to help people in need.”

To him, the flags can offer a way for helping some cope with loss or can be a token of appreciation.

“Seeing people happy receiving something that I made, in this case an American wooden flag, makes me hyped up,” he said.

To date, Acosta has made around 300 flags.

“I know I’m from Ash Fork, this little town. I live in the guest house behind my mom’s house. That all starts getting into your head and you start thinking all you’re good for is to give up and go and work doing something you don’t want to do,” he said.

Those interested can follow Acosta on his social media pages. Custom made wooden flags are available by email at jesusacosta55@hotmail.com or on Facebook at Acosta’s Wooden Flags and Designs.