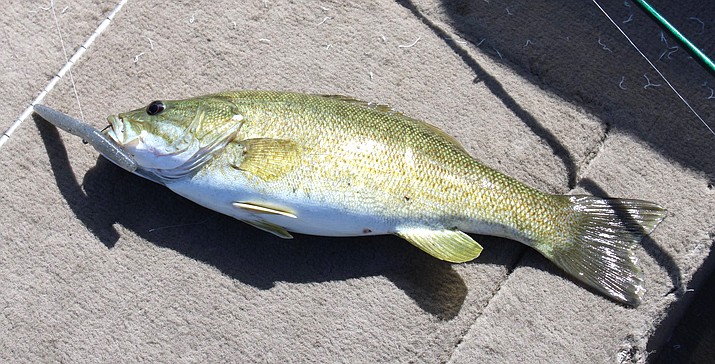 Water temperature is now in the perfect zone for bass fishing.

Bass spawn during April and May when water temperature is between 60-65 Fahrenheit. In the fall, the same temperature range provides the most active feeding opportunities for bass. If you like to fish for bass, now is the best time. Expect the water temperature to remain in the 60s during the next two weeks.

Bass may be in water less than 10 feet deep near shore or as deep as 30 feet in off-shore habitat. Concentrate on rocky habitat including rocky points and shelves. Cast to shallow water near shore or drop down to deeper water right under the boat. Pay close attention to the feel of the lure hitting the bottom.

Bass may see the lure coming down and hit it as soon as it is in range, or they may wait and watch it on the bottom for a minute or two before picking up the lure. The bite may be subtle so pay attention to the weight of the lure as you pick it up from the bottom. If there is a tiny bit of extra weight, set the hook to see if it is a bass, or a stick, or aquatic weed.

Bass fishing should be very steady over the length of the lake. A recent report indicated 30 smallmouth bass and one largemouth were caught near Gregory Butte. The bite would best be described as very light. If they hit on the initial drop, it just felt like a bit of extra weight when the rod loaded up while picking up the bait off the bottom. If the rod feels “different” as the bait is picked up off the bottom, set the hook to see if it is a fish.

The most effective plastic baits reported this week were Yamamoto shad shaped worms in natural shad or watermelon/white laminate used with a drop shot technique and Senkos. That seems exactly like the fish report from the end of April in the springtime. The bass caught ranged from 12 to 15 inches and were fat and healthy.

Another report from Bullfrog Bay indicated stripers were boiling between Bullfrog Marina and the main channel. The boil was quick but the fish stayed up long enough to provide the intense excitement that comes when fish feed on the surface. It is possible to see stripers boiling anywhere on the lake. It is more common to see surface action early and late.

If no stripers are feeding on top, just watch the graph to see if a school of stripers passes under the boat. Drop a Kastmaster or your favorite striper spoon down into the school.

Another option is to troll shad imitation trolling lures anytime striper schools pass under the boat. The best striper action is from Padre Bay all the way to 4-mile canyon at the northern end of Lake Powell.

There are more shad in the upper lake than in the Wahweap area. That means stripers are much more likely to feed in areas where shad are abundant.

There are more species available to catch lake wide. Watch for bluegill in shallow water near shore or in the shade of a houseboat near your camp. Catfish are likely to visit any camp along the shoreline. Walleye are still active early in the morning and as the sun sets in the west. The water temperature is perfect. It is just like springtime. Go catch some fish.