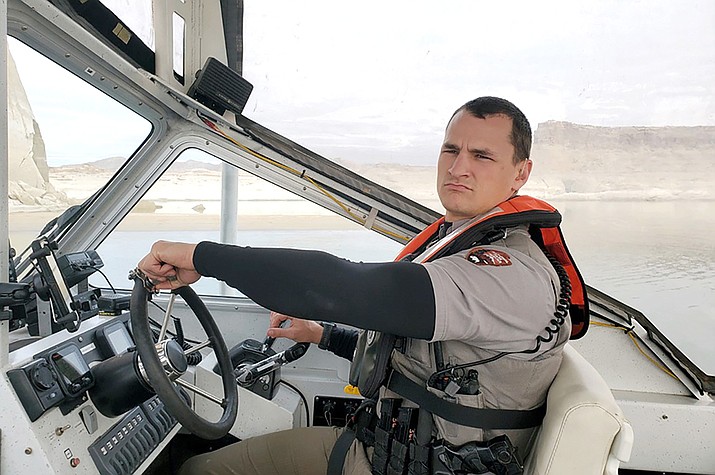 PAGE, Ariz. — Zachary Stuenkel, a ranger at Glen Canyon National Recreation Area received the Citation for Valor from Secretary of the Interior Deb Haaland last month in recognition of his courageous actions in saving the life of a woman trapped under a capsized boat on Lake Powell.

On June 29, 2020, during a thunderstorm on Lake Powell, Stuenkel battled swells approximately three-feet high and wind gusts between 20 and 30 miles per hour in a work boat to reach the scene of a vessel in distress.

Upon arrival, rangers realized that a boater was missing and surmised that the person was trapped in the sinking vessel. Without hesitation, Stuenkel removed his duty gear, donned swim goggles and entered the water where he discovered that the woman was trapped in the cabin and unable to free herself. He was able to pull her to safety where she was treated for near drowning and hypothermia.

“I thank Officer Stuenkel for his service, and so much appreciate him for his dedication, commitment and heroism. He saved a life. We are proud of him, and our entire ranger staff and support personnel,” said Superintendent William Shott. “This team is among the very best of our public servants who are valiantly, selflessly and quietly serving the public every day.”

The citation was presented as part of the department’s annual Honor Awards Convocation.

According to the National Park Service, these awards celebrate the most prestigious recognition that can be granted by the DOI for career accomplishments.