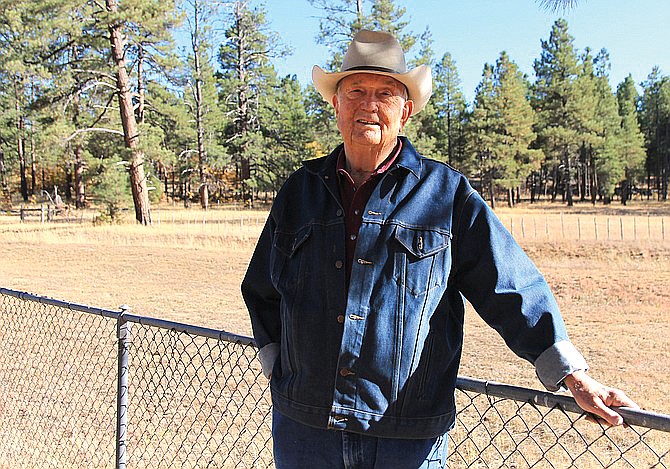 “Harry spent time driving and looking around their land with my dad, brother and two sons earlier that day,” said niece Britt Robertson.

Some in Williams only knew Robertson as a rancher, tending his livestock and land at Pine Springs Ranch west of Williams. However, Robertson was well-known nationally as a pioneer of aviation fuel system safety, with his name in the National Aviation Hall of Fame.

Robertson came from a long line of entrepreneurs, engineers and aviators. He was a descendant of William and Frank Robertson, who ran Robertson Aviation Corporation, a post-World War I aviation service that employed Charles Lindbergh as its chief pilot for contract air mail service. The company also had passenger air service, gave flying lessons and performed exhibition flights, and resold surplus military aircraft.

Robertson’s mother, Doris Duffield, grew up in Williams along with her five brothers and sisters. Their father was Elmer Harrison Duffield, a descendant of former U.S. presidents Williams Henry Harrison and Benjamin Harrison, who made a name for himself in the Williams railroad industry.

Beginning from his experiences in his youth and interest in aviation, Robertson translated his curiosity with aircraft into a career as a pilot for the U.S. Air Force, Arizona Army Guard and Air National Guard. However, he will forever be remembered as the “Father of Crashworthy Fuel Systems.”

Robertson spent nearly 65 years in a career devoted to aviation safety, specifically the engineering and design of the country’s first crashworthy fuel system, the “Robbie Tank,” a self-sealing fuel system that would eventually lead to saving over 8,000 lives in just the first 20 years of its existence by nearly eliminating post-crash fires in military helicopters. Robertson’s work has reduced the military helicopter death rate by fire from 42 percent in 1970 to less than 1 percent today.

The inventor, engineer and aviator holds numerous patents on items he invented for aviation safety. Robertson founded Robertson Fuel Systems in Tempe, Arizona, which continues to improve on the original “Robbie Tank” of the 1970s with the addition of a magneto-activated resistive fuel quantity transmitter that protects the tank from damage in an accident. Many EMS providers, including the Los Angeles County Sheriff’s department and Oklahoma City Police Department, have incorporated the new crash-resistant fuel tanks into their helicopters.

“There’s no reason for someone to survive a crash — and then die in a fire,” was a quote that Robertson repeated to any who would listen.

He founded the Robertson Safety Institute (RSI), a center for research and development in safety education. RSI continues today by giving industry leaders the ability to stay on the cutting edge of research and practice in aviation and industry safety.

Three buildings on the Prescott campus are named after him — the David L. and S. Harry Robertson Flight Simulation Center and the Robertson Aviation Safety Center I and II. The safety center complex includes an aircraft accident investigation laboratory with recreated accident scenarios and equipment for disassembling, inspecting, and evaluating aircraft components.

Robertson gave gifts to support scholarships, athletics and research at Embry-Riddle. His generosity helped the university to build the STEM Education Center in Prescott, the Henderson Welcome Center and expand the library, archives and ROTC facilities, according to the university.

“Robertson valued his long relationship with Embry-Riddle, as an advisor and benefactor,” the university said in a statement. “Most of all, he appreciated his opportunity to reach students who would continue his commitment to safer skies.”

Robertson spent much of his retirement at Pine Springs Ranch in Williams, and enjoyed visiting friends in town. He loved to tell stories and was an eager listener, always displaying a keen interest in what others had to share.