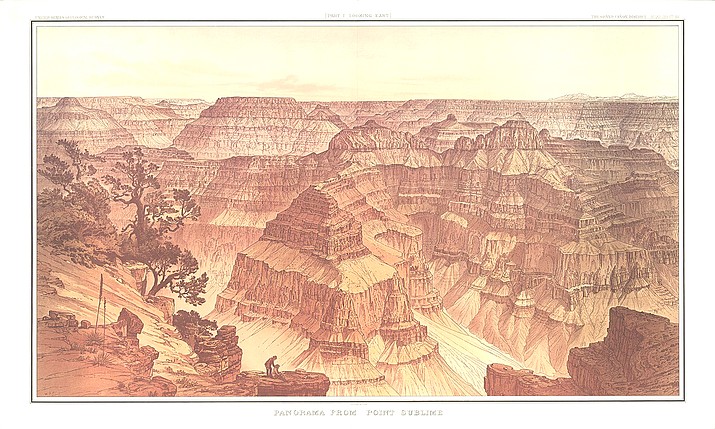 A 1977 republication of the original 1882 “Panorama from Point Sublime,” illustrated by William Henry Holmes, from the “Tertiary History of the Grand Cañon District with Atlas.” A cartography project by Arizona State University is currently working to digitize and creating a database for researchers and public viewing. (Photo courtesy of ASU Library Map and Geospatial Hubcanned)

PHOENIX, Ariz. — Arizona State University (ASU) has unveiled a new multimedia and public outreach program to bring the first monograph by the U.S. Geological Survey into the Digital Age.

The “Tertiary History of the Grand Cañon District with Atlas” was originally published in 1882 by Clarence Dutton and marked a watershed moment in the history of the Greater Grand Canyon area— through its artistic style, scientific merits on the area’s geology but most importantly its cartography.

Born the son of a shoe and boot dealer in Wallingford Connecticut in 1841 Dutton would go on to become a brilliant polymath graduating from Yale at the age of 15. For a while he also went to the Yale Divinity School – he dropped out before the school threw him out, according to emeritus professor at ASU Stephen Pyne.

Dutton would go on to enlist in the Connecticut Volunteers to be seriously wounded at the Battle of Fredericksburg during the Civil War. He later joined the U.S. Army Ordnance Corps.

After the war Dutton developed a friendship with famed Grand Canyon explorer John Wesley Powell in the early 1870s in Washington D.C, the two bonded over a mutual interest in artillery and Dutton’s increasing interest in geology. The U.S. War Department detailed Dutton out to the Powell survey in 1875 and Dutton would go on to explore and map the Kaibab and North Rim of the Grand Canyon from 1879 to 1881.

The “Tertiary History of the Grand Cañon District with Atlas” (Dutton’s Atlas) was produced from Dutton’s survey during those four years; it marked a departure from previous European documentations of the West.

“The canyon had been described earlier, even illustrated, but the images were distorted,” Dutton biographer Robert Stewart Anderson wrote in 1977. “The artists were of a European school … Sagebrush and sandstone became evergreen and granite. He abandons the god-fearing, the angelic and the heavenly images for those of man and science.”

For Congress and D.C. bureaucrats the Grand Canyon was solidified by these complimentary reports. The years spent surveying come together at a location on the North Rim Dutton referred to as “Point Sublime” in which he can synthesize all of the geologic history of the canyon and then he synthesizes the aesthetics with the evolution of a day sunrise to sunset, according to Pyne.

“The Grand Cañon of the Colorado is a great innovation in modern ideas of scenery, and in our conceptions of the grandeur, beauty, and power of nature,” Dutton said in the work. “As with all great innovations it is not to be comprehended in a day or a week, nor even in a month.”

Nor even in 139 years, according to ASU Director of Maps, Imagery and Geospatial Services Matthew Toro. Toro is leading the new project at ASU entitled “Dutton’s Atlas: How Cartography Helped the Canyon Become Grand.”

“Your view of the canyon is expanded every single time you’re there,” Toro said. “But the reality is we are small, tiny creatures trying to explore this vast, vast regional space and without the role of maps such as those contained in Dutton’s Atlas we would have no sense of the scale of this region.”

For Toro cartography the science of mapmaking is important for its ability to rescale geographical space and allow people to form a mental map. It’s that mental map he is hoping ASU’s project will impact.

One example of a changed mental map is the canyon’s place in geologic time and an appreciation for how our own human lives are part of a small segment of the millions of years it took the Colorado River to cut through the rock layers down to the 1.75 billion year old Vishnu Basement Rocks.

ASU’s cartography project is bringing Dutton’s Atlas into the 21st century. They are doing this through multimedia digital curation of the work by creating a digital counterpart and outreach events, including an in person exhibit and in person symposium. Most of these events are planned to take place during the fall 2022 semester at ASU.

ASU will be taking the images, landscape scenes and the maps themselves from Dutton’s Atlas and will digitize and use post-processing techniques to create new data products and ways of experiencing the nearly century and a half work.

One option is to create GIS data layers for distribution to researchers of historical cartography or for the general public to make 3D versions of Dutton’s Atlas overlaying its geological maps with contemporary data, in order to show how geological understanding has evolved. For the public each of the maps that are part of the Atlas will be updated to be on an interactive web map.

Through the funding of an Arizona Humanities grant and other sponsorship, the project will be hiring three humanities consultants, at least one, but ideally all three, will be individuals from Indigenous communities historically associated with the greater Grand Canyon region, according to Toro.