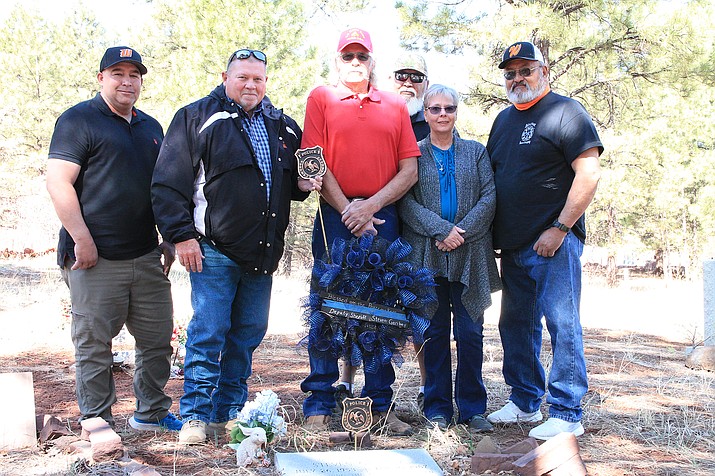 The event is open to the public.

In the spring of 1973, Steven Garibay graduated from the police academy in Phoenix and began serving on the Williams Police Department. He remained an officer in Williams from 1973-1980.

Before his death, Garibay planned to return to Williams to work with the Coconino County Sheriff’s Department.

It’s been 70 years since Joseph A. McDaniel, 59, served as a marshal for the town of Williams.

He was born in Nogalas, Arizona and served in the infantry during the World War I, after which he settled in Williams. On April 15, 1947, McDaniel was called to arrest Lee Skinner, 22, who was causing a disturbance at a local tavern. Skinner had pulled a pistol on two officers and McDaniel was called for back-up. McDaniel ended up wrestling Skinner to the ground but not before Skinner drew McDaniel’s gun and shot him four times.

Likewise, 28 years prior to McDaniel’s death, 37-year-old Victor Melick was shot during a confrontation with a horse thief.

During that time, Williams was known as the toughest town on the Santa Fe Railroad. Melick held many jobs including actor, electrician, mechanic and law man. He aspired to run for public office.

In 1919, a local criminal with a history of mental instability and who had served time in the Arizona State Prison, returned to town and immediately returned to his old ways. The criminal, Simplicio Torres, stole a horse from Williams resident Mary Means and bobbed off the horse’s mane and tail in an attempt to disguise the animal. When Means recognized the horse, Torres gave the horse back, but not before she called police.

Melick attempted to arrest Torres and was shot and killed. An armed posse was formed and cornered Torres in an abandoned building in Williams. The posse filled the building with numerous rounds of ammunition and wounded Torres.

Torres was ultimately captured, tried, convicted and sent to prison in Florence, where he was later hanged. Melick’s funeral was reported to be the largest and most attended funeral at the time in Williams.

Williams honored Wickenburg officer Clarence Dotson, who is buried in the Williams Cemetery.

Dotson was killed in February 1945 while performing his rounds. He interrupted a burglary at the Hassayampa Drug Store three times. A bus driver stopped the escapee and the criminal was sentenced to life in prison.