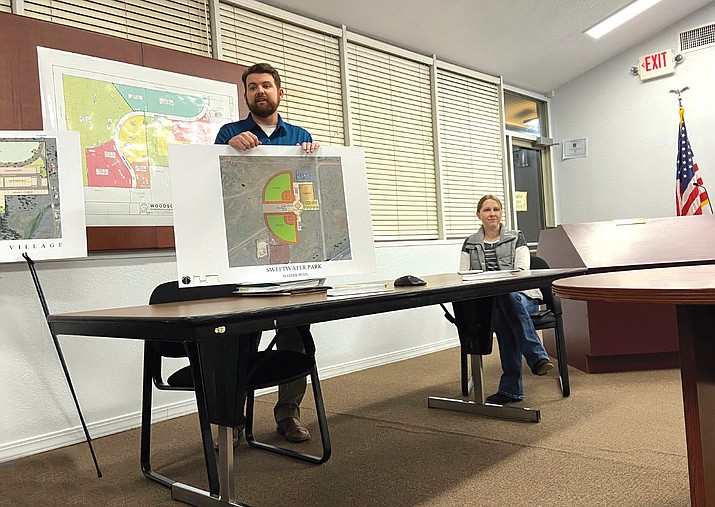 WILLIAMS, Ariz. — Dozens of local residents weighed in on the first public hearing Nov. 16 for Phantom Ranch Village, a proposed 87-acre residential development on the north side of Williams between Grand Canyon Boulevard and Airport Road.

During the hearing before the Williams Planning and Zoning Commission, attorney Mark Hanson, representing developer Steve Iverson, presented the project to the commission and local residents in attendance. 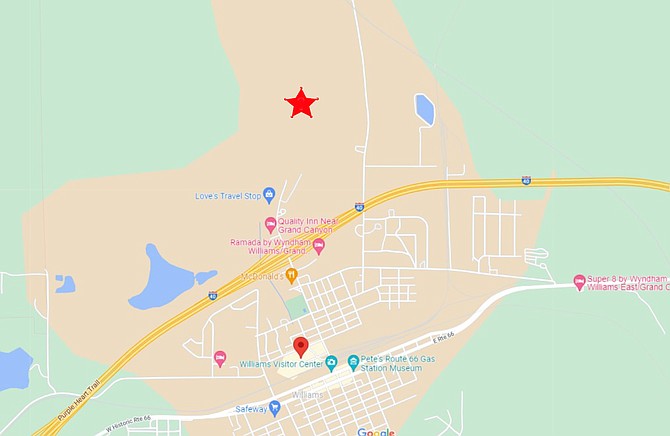 Iverson has requested a zoning change for the property to encompass 313 residential units, including single family homes, duplexes, townhomes and apartments. Also included is 15 acres for commercial development.

The development could house up to 1,000 people, Hanson said.

The property is currently zoned estate residential, with minimum of 15,000 square-foot lots, with a few acres of commercially zoned property, according to City Manager Tim Pettit.

“We don’t pretend that the project doesn’t have a potential downside,” said Hanson. “The downside that the city recognizes and we recognize is the density.”

Several residents who live on Airport Road shared concerns with Iverson about the proposed development.

“Where is all the traffic going to go?” said Robynn Eckel-Smith. “We have a horrible problem with Airport Road as it is, it’s a speedway.”

Iverson said the plan for development is to extend Grand Canyon Boulevard north past Love’s Travel Center to loop through the subdivision and connect with Airport Road.

“We are going to improve Airport Road all the way from the Rodeo Grounds,” Iverson said. “We are trying to direct traffic through Grand Canyon Boulevard and this (Airport Road) would be a secondary road that would be improved and resurfaced.”

Resident Patty Williams said she doesn’t believe that residents will fully utilize Grand Canyon Boulevard for access to the subdivision.

“There’s a lot of traffic with Love’s, and in the winter there’s a lot of problems with the trucks being stuck on that road.” She said. “It’s all locked up because its steep and its icy, they jack knife, they slide off, so that means everybody’s going to be going up Airport Road.”

Hanson said the plan is to develop the property in two phases. The first phase would be the east side of the property where Iverson plan to develop apartments and townhomes. 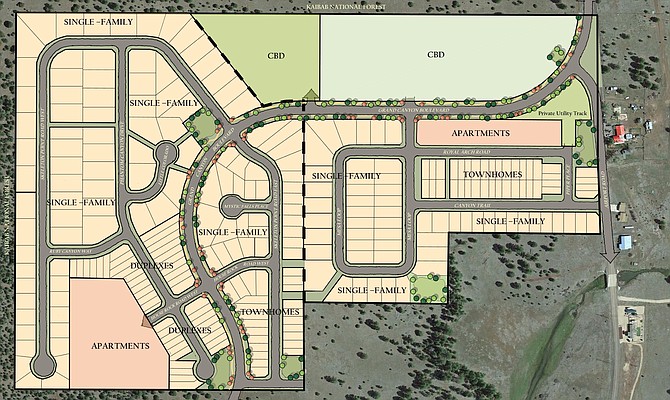 Also included in phase one is a contribution of $1.2 million for development of Sweetwater Park, a planned city of Williams facility that will include ball fields and a large playground just north of I-40.

“Phase one is to hit head on with the city of Williams’ problem with affordable work-force housing,” Hanson said. “The city’s leadership has indicated that work-force housing is a priority for the city and we’re trying to meet that need.”

Some residents questioned the use of the term “affordable” when describing units in the subdivision.

“What is affordable?” said resident Cameron Maebe. “Well I can tell you they aren’t affordable, to call it affordable housing isn’t really fair because it isn’t.”

Hanson said Iverson is including apartments, townhomes and duplexes in the project to provide local residents with more housing options at lower costs, but Iverson indicated he has no plans to create Section 8 housing, the federal government’s voucher program to assist low-income families.

“It’s going to be as affordable as we can make it,” Hanson said. “Given the rise in development costs in both labor and materials over the past year, I simply don’t have an answer for that (pricing).”

Local realtor Lisa Paffrath lent her support for the new development as she shared her experience of the current lack of housing in Williams.

“This product is going to go crazy when it comes on the market, it will go fast,” she said. “I’m in total support of this project, because when we talk about affordable housing, it’s getting more and more difficult.”

Paffrath said local residents are not only struggling to afford housing in Williams, but are also being outbid by investors looking for vacation rental properties.

Paffrath said many residents are now looking at outlying areas such as Ash Fork for more affordable housing.

“I’d love to see Williams stay the way it is, it’s a great little town, but development is here,” she said. “Progress is here and people live it. The word is finally out on what we have to offer here and we’ve got to think about the people that are keeping the town going.”

Williams also asked if the developer can limit short-term rentals with a home owner’s association.

“There will be an HOA and CCRs governing the community,” Hanson said. “I don’t know whether those CCRs will have a prohibition on short term rentals, however, given the mark up on the apartments and townhomes we are proposing, those will be the ones that steer away from short term rental and be intended for work-force housing.”

Other residents were concerned about the impact on the local fire department and ambulance service.

“If you bring this much housing to our community, that will impact our fire service and our EMS services,” said resident Antonia Staffer. “Is the developer doing anything to help increase our service capability?”

Hanson said the city has not raised objectives to it and the developer has no plans to specifically improve fire and EMS services.

Others expressed concern about the water and waste water services for the community.

Resident Mark Wordan said he does not believe the city has the water supply sufficient to support the development.

“We need to see how the Sweetwater Well will do before you approve any developments,” he said.

Pettit said the development is providing its own waste water treatment plant because the city’s facility is nearing capacity, with a study underway to determine its future.

“At this time, we have frozen them (the developer) until the survey comes back in eight to 10 months,” Pettit said. “Whatever comes out of that survey will show what we need to do to that plant.”

A second public meeting is scheduled for Dec. 16 with the Williams Planning and Zoning Commission. The commission and the city will then forward their recommendations to the Williams City Council who will hold a public meeting Jan. 16. Both meetings begin at 7 p.m. at the Williams Council Chambers at City Hall, 113 S. First Street, Williams.

“We encourage public comments and it’s the recommendations from all that public input that we are going to relay to the council,” Pettit said. “A lot people are coming to Williams and its changing, but we want to listen to our community.”