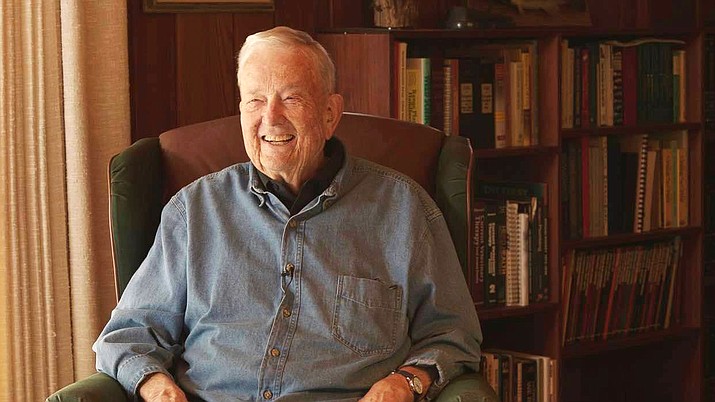 He was born on Oct 2, 1934 in Phoenix, Arizona, the first of three sons (Harry, Jerry, and Gary) born to S. Harry Robertson Jr. and Doris (Duffield) Robertson. When not serving as a USAF pilot, he lived the first half of his life in the Phoenix and Scottsdale area. He was able to spend the second half of his life alternating between Phoenix, later Gilbert, and his cattle ranch in Williams, Arizona.

Harry Robertson was a lifelong aviation enthusiast. He built his first model airplane at age 4 and as a teen, went on to fly them in national championships. He held 5 national records in Free-Flight gliders and Flying Wings. With money earned working in the family’s printing business, he began taking flying lessons at Phoenix College Flying School when he was 15 years old.

He became involved in automobile drag racing. He went on to hold national speed records in his 4-Cylinder class. He built the cars and drove them and did research on fuel improvements. He was a graduate of North Phoenix High School and in 1956 he earned a BS in Business Administration and Mechanical Technology from Arizona State University.

In 1954, while a student at ASU, he married his first wife, the late Nancy Jean (Bradford) Robertson. She bore him a son (David L. Robertson) and a daughter (Pamela L. Cunningham Jose). Following his graduation, he entered the United States Air Force. His active duty time was served flying the B-47 aircraft. He also began his work in aviation safety including accident investigation.

After the USAF active duty tour ended in 1960, he served as a pilot in the Arizona Air National Guard (Phoenix) flying C-97 aircraft and then later flew in the Army National Guard (Papago). He was a military pilot until 1974. He was also an active civilian pilot. Partnering with his brother Jerry, he owned and flew three high performance racing sailplanes. He also owned and piloted a hot air balloon (with the Air Guard’s Adj. General Donald Owens), and he owned and flew his Hughes 500 Helicopter for 30 years.

After his active duty in the USAF, and while flying in the Guard, he became a Registered Professional Engineer working at Deer Valley Airport for AvCIR (Aviation Crash Injury Research, later AVSER- Aviation Safety Engineering and Research), a division of the Flight Safety Foundation.

Beginning in 1961, he quickly became the world authority on aircraft post-crash fire. The group learned a lot by investigating accidents and by instrumenting and crashing more than 40 aircraft including airliners. As the major researcher on crash fire’s origin and its effect on passenger and aircrew survivability, he was partnered with FSF and the Army and co-authored the book (Crash Survival Design Guide TR 89-D-22) on the design methodology to mitigate the fire hazards. More than 10,000 lives have been saved by his safety improvements to Army helicopters. He went on to found air crash research laboratories at ASU and helped Embry- Riddle Aeronautical University (ERAU) establish their safety research labs and educational programs.

From 1970 through 1980, as a Research Professor, he taught Aircraft Crash Investigation at ASU from a survivability standpoint. He began in 1976 to manufacture a line of crashworthy fuel systems for civilian and military use. Robertson Aviation (now Robertson Fuel Systems LLC- a HEICO Co.) showed the world how to do things safer and when the military needed to expand its capabilities, he and his company were always there to do what was requested. Always ready when our country called.

He also answered the call when auto racing decided that it was time to tackle their fire problems. First he essentially eliminated post-crash fire injuries in Indy cars and then helped his designs and concepts to spread throughout racing. Racing is MUCH safer now that it was 40+ years ago. Our passenger cars also derive some benefits from this work.

In 1999, Harry married Linda O’Neill. He continued to work at the projects that he found interesting and worthwhile but they found time to travel more. They were involved in many activities with the family and he became active raising cattle at his Pine Springs Ranch.

Harry created a huge body of knowledge that makes the world a better, safer place. He used the knowledge to do important things. Later he taught and shared knowledge and the thought processes and methodologies that are used to develop knowledge. He handed down resources for others to succeed. To sum him up in one sentence, “He cared”.