Vikings fall to St. David in close 1A semifinal game
Williams ends the season with a 7-2 record 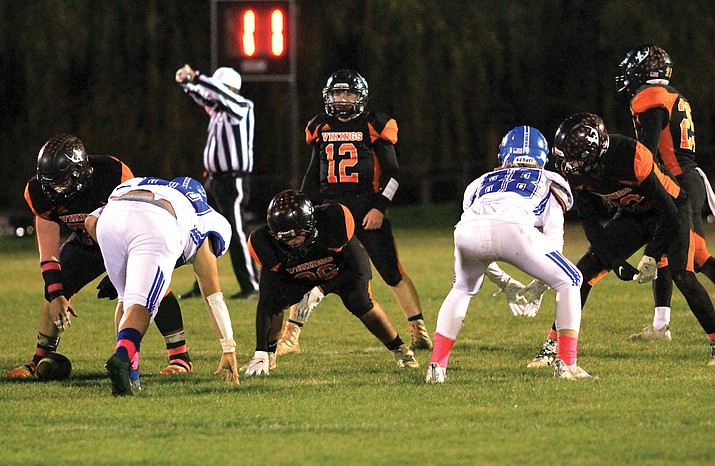 Viking quarterback Tyler Jensen calls a play in an earlier season game. The Vikings lost to St. David in the 1A State semifinals Nov. 6. (Wendy Howell/WGCN)

WILLIAMS, Ariz. — The Vikings football team ended their season with an exciting, albeit, disappointing loss to St. David in the 1A State semifinal game Nov. 6.

The Vikings led the Tigers throughout the first half and into the second half, but the tide turned in the third quarter when St. David took the lead.

The Vikings lead 22-8 in the first quarter with Vikings’ touchdowns by Drew Logan and Preston Ford.

St. David opened the second quarter with a touchdown to move the score to 22-14.

With 7:29 left in the second quarter, Logan carried the ball 70 yards for another Vikings touchdown. St. David responded and the score moved to 30-20 at halftime.

St. David returned to the field with renewed energy as they scored the first touchdown of the second half to bring the score to 30-28 with 9:18 left in the third quarter.

With several Vikings temporarily sidelined with leg cramps, the Tigers scored another touchdown at the end of the third, to bring them ahead 36-30.

The Vikings rallied, however, and Jesse Sagor and Ford brought in points for the Vikings at the beginning of the fourth to regain the lead 38-36, but the Vikings couldn’t hang on as the Tigers eventually finished the game with the lead and the win, 50-38.

With the win, St. David will face Mogollon Nov. 13 at the state championship game at Coronado High School.

The Vikings end the season 7-2, with losses to Mogollon and an early season non-conference game with Pahranagat Valley of Nevada.

Drew Logan finished the season with 1,369 rushing yards, fourth in the 1A Conference. Logan was fourth in scoring with 166 points.

Preston Ford finished the season with eight sacks, ninth in the conference.

Logan also led the 1A Conference in kickoffs with 3,339 yards. He also led in punt returns averaging 43 yards.