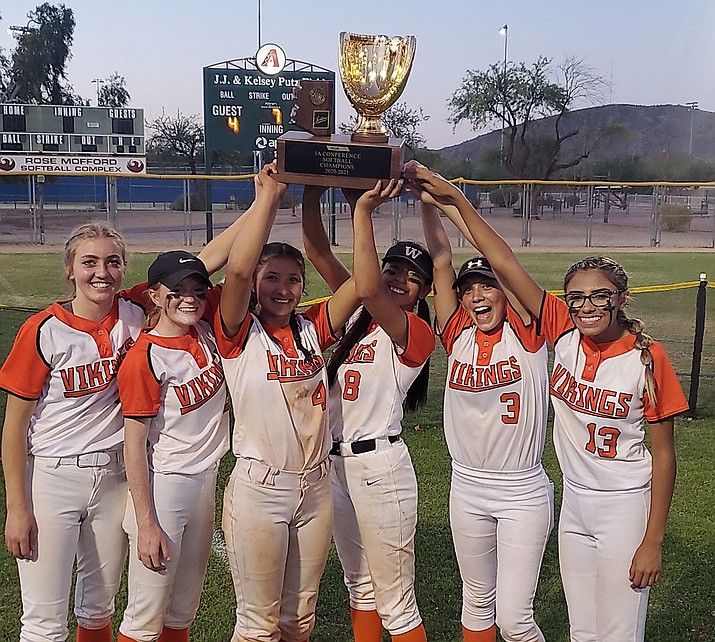 Williams Vikings softball players celebrate their 1A State Championship win over the San Manuel Miners May 15 at Rose Mofford Field in Phoenix. The Vikings beat the Miners 6-4 to claim the title. (Photo/Shelby Alvarado)

WILLIAMS, Ariz. — The wait is over. The Vikings are state champions.

The win was sweet, and not only for the 2020-2021 Lady Vikings softball team. Williams High School students and alumni, along with the entire Williams community, celebrated the Lady Vikings 1A State Championship win May 15, as the team not only brought home the school’s first softball title, but also the first title for any girls sport since 1992.

The community had to wait over 29 years, but the 2021 Lady Vikes were focused and had their eye on the prize. 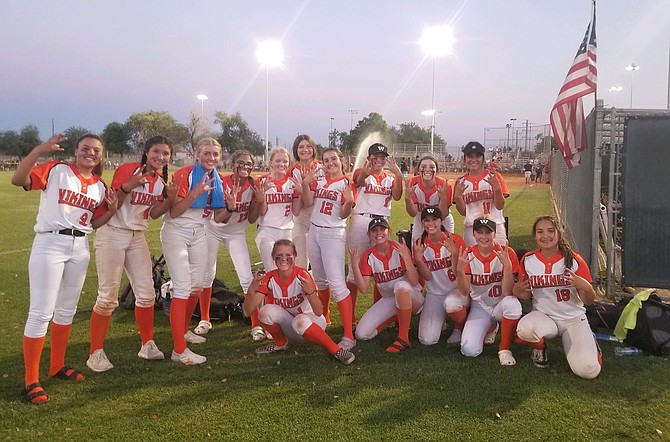 “Whether we had a good game or a bad game, our goal was to always win the last game,” said Williams Head Coach Raul Hatch.

That positive attitude paid off in the title game as the No. 1 seed Vikings recovered from a three-run deficient to emerge victorious with a 6-4 victory over the No. 3 seed San Manuel Saturday night at Rose Mofford Sports Complex in Phoenix.

The Miners capitalized on several early errors by the Vikings that included scoring a run on a throwing error in the first inning and then scoring two more in the third on errors.

“They were all three unearned — we had the jitters,” he said. “The game started at 5:30, but I don’t think the team showed up until six.”

However, the game began to change in the bottom of the third with two outs as senior Aaliyah Alvarado had a big hit that gave the Vikings their first runs of the game. This was followed by another hit by senior Chyanne Echeverria that continued the momentum.

“Our girls have contributed No. 1 batter through No. 9 batter all year long no matter what batting order we put in,” Hatch said. “They just performed.”

Following the strong offensive play by the Vikings, pitcher Sydnee Mortensen allowed the Miners just one run and a walk for the rest of the game.

Hatch said the girls played consistently all season, and were never discouraged when faced with two outs.

“The upper classmen set a wonderful example of how the game should be played and then the underclassmen just performed,” he said. “They just were not intimidated.”

Mortensen had 12 strikeouts and Hatch said the goal was to make sure the pitches went where they wanted them to go.

“We just went after the girls we knew we had a chance to get out and Sydnee did her job and got the outs,” he said.

After a disappointing season last year that was cut short because of COVID-19 closures, many of the girls continued playing club softball through the summer and fall, and faced a packed season of spring games.

“We came back really, really strong,” Hatch said. “We put the girls up against a really full schedule.”

Hatch said the team only needed eight games to qualify for the state playoffs, but the team faced 20 opponents through the regular season.

“We played two 4A teams, a 3A teams, two 2A teams, that way we could get some of that upper-end competition,” he said. “There wasn’t anything they saw in the state playoffs that they didn’t see during the season.”

Despite the limited field time because of snow in Williams, Hatch said the girls set out to prove themselves as a top team.

“Because of the schedule thrown in front of them, they were prepared,” he said. “They wanted to prove we were No. 1 for a reason.”

Hatch said the team carried 15 girls, but each one contributed to the winning season.

“At the end of the day, every girl at the varsity level contributed one way or another,” he said. “All season long, it was a team effort, 100 percent.”

Williams High School plans to honor the state champions May 21 at noon with a downtown parade.