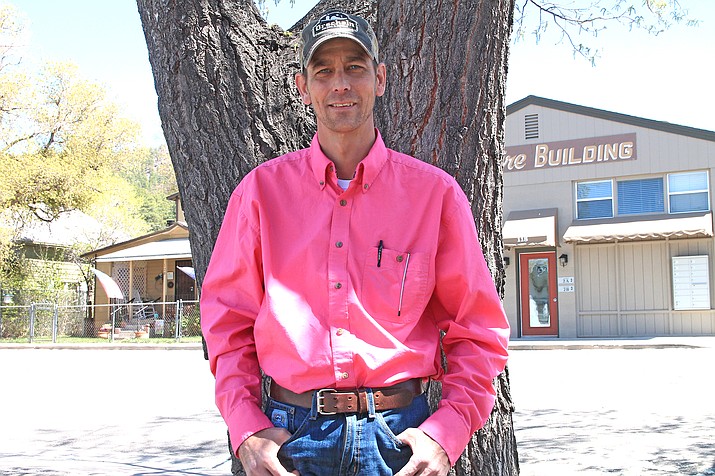 Jason Moore is the new fire inspector for the city of Williams. His first day on the job was April 26. (Loretta McKenney/WGCN)

WILLIAMS, Ariz. — On April 12, long-time resident Jason Moore was hired as Fire Inspector for the city of Williams, a position that has been in high demand by Williams Volunteer Fire Department for several years.

According to Williams Fire Chief Ian James, having a full-time fire inspector could be the difference between life and death for firefighters and the public in Williams.

“Having inspections on these occupancies could end up saving lives in the future,” he said.

Over the years, the all-volunteer department has voiced concerns about the need for a full-time position that would benefit the department. Hiring a fire inspector is one-step in the right direction, according to James.

“Many buildings, especially the hotels of Williams, the only reason they could be built is because they have fire suppression and alarm systems in place. If those systems are not operational or functioning there’s no way a volunteer fire department of our size could handle a full-on structure fire in one of those buildings,” he said.

In March of 2020 the city advertised the fire inspector position. Four applications were received and three of the applicants were interviewed.

However, because of COVID-19 and an uncertainty with revenue, the city placed the position on hold.

Now, with COVID-19 restrictions relaxing and revenue returning to normal, the position was revisited and offered to Moore.

“The city felt he was the best candidate for the position,” said Tim Pettit, community development director for the city of Williams and Moore’s direct supervisor.

According to Pettit, Moore’s primary responsibilities include ensuring building and life safety codes and components are maintained, tested and inspected per adopted codes, through-out the life of the building and/or business.

“The general public and our emergency responders depend on this for their safety,” Pettit said.

It has been nearly two decades since the city of Williams has had a fire inspector and at that time, the position was divided into a dual position of fire inspector/nuisance abatement officer.

According to James, Williams Fire is excited the job is now a stand-alone position. He said having a dedicated, full-time inspector will go a long way in protecting property and lives.

“We’re really happy to see it is a dedicated position that’s sole responsibility is fire inspections and fire prevention related activities,” he said.

Bringing experience to the position

Moore has lived in Williams for 36 years and is the son of Williams Mayor John Moore.

In 1993, Moore was hired as a wildland firefighter by the U.S. Forest Service where he worked on an engine, hotshot and 20-man crew, as well as on a helitack crew.

In the late 1990s Moore was hired as the fire inspector/nuisance abatement officer for the city of Williams. In 2000, he received several state certifications, including Fire Inspector I and II.

“At the time I actually worked as fire officer, nuisance abatement, planning and zoning (and) assistant building inspector. I worked almost every administrative position at City Hall,” he said.

Moore served in that position for four years before transferring to the Williams Police Department where he served for approximately six years. Moore was terminated in 2006 after allegations were made against him by fellow officers. Following an investigation, Moore's police officer certification was submitted to the Arizona Peace Officer Standards and Training Board for review.

Moore said the board voted to take no action and he maintains his Arizona peace officer certification.

In 2006, Moore purchased Twister's Restaurant in Williams, which he recently listed for sale.

“I’m currently in escrow, and have a pending backup offer,” he said.

Moore said being a business owner will not interfere with his new responsibilities.

“I do have empathy with other small businesses, but this is important. I keep my business fire safe, I keep my hood up to date, I keep my extinguishers up to date and yes, sometimes it’s a financial burden but it is important — that’s the way I look at that,” he said.

In addition to inspecting businesses, Moore said his responsibilities include assisting law enforcement, and state, county and local governments; enforcing fire codes, investigating the causes, origins and circumstances on fires including those suspected of arson; maintaining and propagating fire codes and reviewing plans submitted for businesses to ensure they are equipped with appropriate fire suppression systems.

“Fire inspections are the backbone of fire prevention. The inspections I’ll be doing in the community are essentially prevention,” he said. “The whole purpose of fire prevention and why it’s important is to protect life and property in the city of Williams. It is also important to those on the fire department. Fighting fires is inherently dangerous in itself and when firefighters have to go into a motel where the sprinkler or alarm system is not working or fire exits are blocked… that makes it even worse.”

Moore said he completed approximately 15 inspections during his first week on the job. He anticipates it will take time to get the city up to code because of the amount of time that has lapsed between the fire inspector position being filled.

“It’s going to take a while. To be honest, the inspections take a while, (but) if I can do two, three, four a day they’ll add up pretty quick,” he said.

Businesses not up to code can be cited. Moore said they will be given a reasonable amount of time to correct the violation before further measures are taken.

Moore also partners with Williams Fire by downloading completed inspections into software accessible to firefighters to use for reference during a call.

Inspections are primarily limited to businesses, other than abatement or fire hazard issues within residential areas, however, Moore said he is happy to answer questions from residents, check smoke alarms and inspect properties if requested.