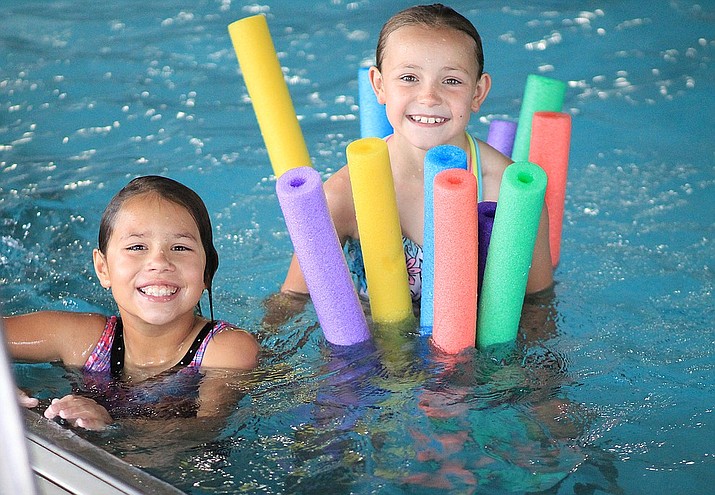 Children enjoy a day of swimming at the Williams Aquatic Center in 2019. (Wendy Howell/WGCN)

WILLIAMS, Ariz. — The Friends of the Williams Aquatic Center is hoping to jump back in the water this year with new fundraising ideas for an HVAC system.

Although the pool and recreation facilities remained closed last year because of COVID-19 safety concerns, the volunteer group is hoping to garner interest in raising funds for the popular facility.

“We usually have the golf tournament, but we cancelled it last year because of the situation now,” said organizer Kris Vasquez. “We hope people will consider giving this year.”

On April 6, the organization is participating in the Arizona Gives program to raise $48,000 to make the repairs needed, which is the first step to re-opening the pool year round.

“Our goal is to keep the pool open pretty much year round,” said organizer Kris Vasquez, “But it’s not possible because the environmental system that is in there is not working properly, that needs to be replaced.”

With the help of Friends of the Aquatic Center, the pool opens five-days a week, for 14 weeks each summer.

In 2011, the Save the Pool Committee applied for non-profit status. “Friends of the Williams Aquatic Center” (FWAC) became the name for this new non-profit organization. The FWAC raises money through sponsoring an annual golf tournament. The money raised is spent on advertising, pool equipment, pool staff, and occasionally funds the purchase of maintenance items.

With the impact of COVID-19 still lingering and the pool facility not being used, the group said now would be a great time to install a new HVAC system.

“As we have done in the past, FWAC is actively searching for non-matching grants and donations to help the city pay for infrastructure items, in this case the HVAC system,” the group said.

History of the Friends

In October of 1999, the Williams city manager signed a participation agreement with Arizona State Parks to accept a grant that would enable the city to replace their existing but aging outdoor pool with a new aquatic center costing just over $1 million. Half the cost was paid by grant money, the other half paid by the city and community donations.

The pool opened in May 2001 with swimming and other aquatics activities accessible year-round, with early morning lap swim hours and open swim time. There were also community swim parties for family celebrations at Halloween, Christmas and New Year’s Eve.

In 2008 recession hit and the community suffered a severe drought. The Williams City Council considered draining the pool, however, several residents strongly advocated against draining the pool. The Friends of the Aquatic Center was organized and stressed the benefits that a pool brings to a small town and strongly encouraged the council to keep the pool open in the summers.

The group was able to raise the money to keep the pool open a few weeks each year, and it has remained open each summer since 2011.

Money raised by the Friends of the Williams Aquatic Center has gone toward free swim days, swim lesson scholarships, passes for low-income families and extension of the swim season.

The group also prints copies of the pool schedule each year and has purchased patio furniture, a tread mill, a music system, a TV and a climbing wall.

To donate to the Friends of the Aquatic Center, visit azgives.org/FWAC.