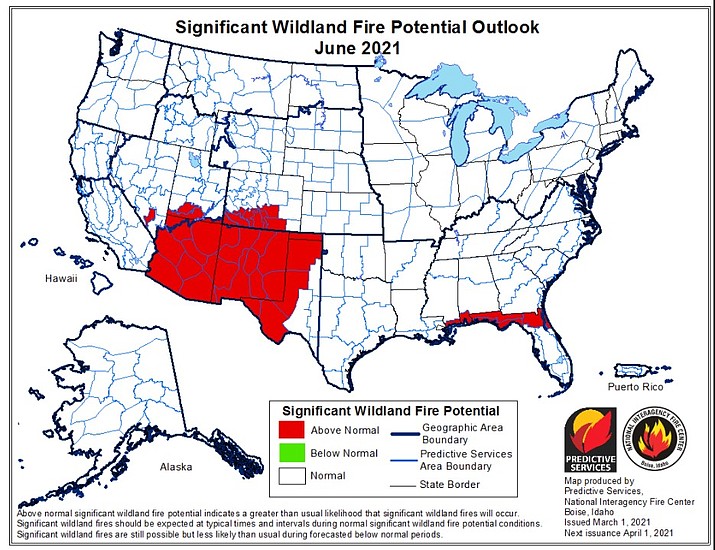 Above normal potential for significant wildfires is predicted for the southwest April-June. (Map/NIFC Predictive Services)

WILLIAMS, Ariz. — Despite having a relatively normal snow year, wildland fire forecasters are expecting the upcoming fire season to be similar to 2020 — the second-worst wildland fire season Arizona has experienced.

Arthur Gonzalez, fire staff officer with Kaibab National Forest, said although the winter snow has been welcomed, it hasn’t been enough to pull the region out of the drought.

“Our only hope is that we get some well-timed storms like we are seeing today, that will delay and stall this drying trend that will take us into the peak of fire season,” he said during a presentation to the Coconino County Board of Supervisors March 23.

Brian Klimowski, meteorologist in charge at the National Weather Service Flagstaff, said the region has received 50-80 percent of normal precipitation since Oct. 1.

“We had a pitiful monsoon last year, a very dry fall,” he said. “And really only since January have we started to see the precipitation we expect.”

Klimowski said most of northern Arizona is in extreme to exceptional drought, especially the areas in the lower elevations north of Flagstaff.

The most recent weather outlook shows the region leaning toward drier than normal conditions with above normal temperatures. However, the new outlook for the monsoon is something the region hasn’t seen for a couple of years — wetter conditions than normal.

“That is both a blessing, that it could quash any fire season in early July, but it also raises concern a robust monsoon might bring some flooding situation on those burned areas,” Klimowski said.

As of now, residents and visitors can expect drier than normal conditions through the start of the monsoon with warmer than normal temperatures, he said.

Thus the significant wildfire potential for May is going to be above normal from the Mogollon Rim to the south.

“The extended drought we’ve had, the ongoing lack of moisture and the forecast for near normal or lower than normal precipitation through May is going to engender above normal wildland fire potential,” Klimowski said.

“I’m encouraged to see that perhaps that monsoons starting in July are tipping toward something that looks more likely a normal monsoon that another dry monsoon that we’ve had in the past,” he said.

Gonzalez said it would help delay the fire season if wet weather continues.

“The North Rim is the furthest reach of the monsoonal flow, so they tend to stay direr longer and tend to get more lightning before significant precip,” he said. “I know there is a lot of high hope for a good monsoon season, I hate to be the realistic person here, but we will probably have three tough months before we get to see that materialize.”

Gonzalez said without significant precipitation there will most likely be discussions about potential fire restrictions, but he doesn't anticipate any COVID camping restrictions this year.

Outlooks: National Weather Service says monsoons and fires should be on track
Is the drought over? El Niño delivers wetter than average conditions to the southwest
After warmest winter on record in Arizona, monsoon could be a wet one
Monsoons move Williams precipitation close to norm
Monsoon precipitation up in the air
Contact Us
Submit Questions, Comments, or Story Ideas