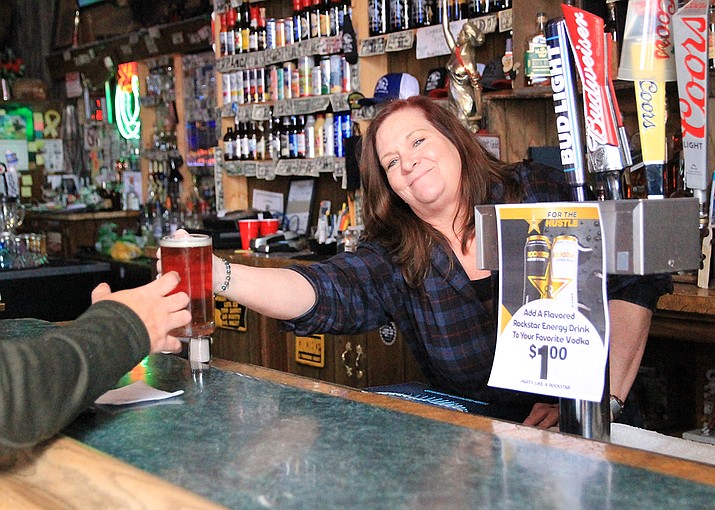 WILLIAMS, Ariz. — After more than a year of restrictions, guidelines and unplanned closures, bars, nightclubs and other businesses throughout Arizona welcomed Gov. Doug Ducey’s announcement March 25 lifting all of Arizona’s COVID-19 business restrictions.

Under Ducey’s executive order, bars and nightclubs can reopen and businesses are allowed to enforce mask mandates and distancing requirements if they want, but cities, towns and counties must lift theirs.

Restrictions on gatherings of 50 or more people also were lifted, but organizers are required to “encourage” safety precautions like social distancing.

At the Sultana Bar in Williams, the news was met with excitement.

“It’s a breath of fresh air and a ton of weight off my shoulders,” said Jason Olson, general manager of the Sultana. “People are excited. Everybody I’ve seen has been excited.”

While businesses in Williams had the option of enforcing the wearing of masks or not, many have had to limit the number of patrons and use social distancing measures.

Some, including the Sultana took additional steps to remain open.

“From where we started a year ago we’ve now incorporated a restaurant that is not only the Little Chicken Spot that offers our lunches during the weekdays, but the Sultana Café that offers dinners and appetizers on the weeknights until midnight and weekends until 1 a.m. That’s now a full time part of our feature,” Olson said.

At the beginning of the pandemic, the Sultana, along with other bars and restaurants closed. They were later allowed to reopen with specific guidelines in place.

“Me and my employees went four months unemployed and when we came back in we did everything we needed to do to try to be successful and bring money back in and keep them working," Olson said. "It’s worked out and now I’m ready to tear it up again and get some music and dancing again."

Ducey cited rising vaccination rates and the opening of vaccine appointments to all adults, as well as a declining number of COVID-19 infections and hospitalizations for his decision.

The governor has continued to encourage the use of masks, particularly among groups of unvaccinated people.

“I’m confident Arizona’s businesses and citizens will continue to practice the fundamentals and act responsibly as we gradually get back to normal,” Ducey said in a statement.

In Arizona, 840,492 cases have been reported in the state with 16,918 deaths recorded, according to Arizona Department of Health Services. More than 3,251,668 people or 28 percent of Arizonans have been vaccinated.

Some cities, including the city of Flagstaff, questioned Ducey’s decision.

On March 26, the Flagstaff City Council issued a statement saying it did not plan to rescind the city’s proclamation requiring mask-wearing.

COVID-19 continues to spread and Ducey’s order “is not in the best interest of public health and further erodes home role,” the Flagstaff council’s statement said.

According to Ducey’s announcement, bars and restaurants will now be permitted to operate without mandatory requirements that customers and staff wear masks and socially distance themselves. Establishments may still require masks and social distancing, but may do so at their own discretion.

In Phoenix, reactions to the new fell along largely partisan lines, with Republican lawmakers and mayors welcoming Ducey’s move and Democrats calling it premature.

House Speaker Rusty Bowers, a Republican from Mesa, called it “the right and responsible decision” in a statement released by Ducey’s office.

“To abandon precautions now is like spiking the ball on the 5-yard line,” Gallego wrote on Twitter. “We know new variants are circulating. The risk of another surge is real. The governor clearly cares a lot less about the people of Arizona than his political future.”

Ducey said local mask mandates were rarely enforced; some mayors said they were instrumental in getting people to comply with the recommendations of public health experts.

In Williams, the Sultana Bar and other local businesses are excited to get back to normal.

“I’ve learned some cool things with all that I had to deal with during that time, some of the things we were forced to do actually paid off, so we’re going to continue those,” Olson said.

According to Olson, he plans to bring live music and dancing back to the Sultana and hopes to have other events taking place starting Memorial Day weekend.

The Associated Press contributed to this story.