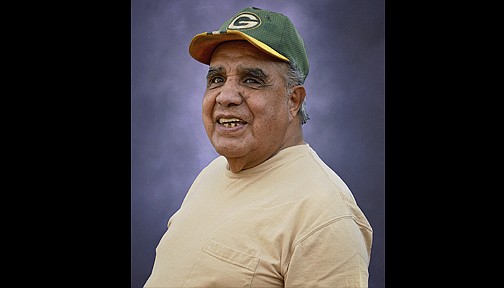 Ernest was born on December 2, 1937 to Ernesto and Celia Lugo in Bellemont, Arizona. He was the second child of twelve brothers and sisters.

Ernest grew up in Williams, Arizona and attended Williams Elementary-Middle School, and then he became a Viking at the Williams High School. After his high school days, Ernest went to work with his grandfather as a grave digger for many years. He would also be seen at the Sultana Theater, cleaning and maintaining the theater with his longtime friend, Fred “Perico” Avila.

Ernest was also known as a sports fanatic. His love for the game lead him to make countless friends in the community. He was well known for cheering on his favorite sports teams: The Green Bay Packers, the Los Angeles Dodgers, and The Notre Dame Fighting Irish. Ernest was also a big fan of watching the Williams Vikings and talking sports to whoever stood next to him. But in the end he would watch any game because his love for the game was so strong.

All who knew Ernest will never forget his wit, charm and generosity. He will fondly be remembered as a World Series winning brother, uncle and friend.

“Be it a janitor or a millionaire, a man with an honest smile on his face throughout his day is truly the richest man in the world.” –Jeffery Sutton.

Because of Covid-19 restrictions, only family members are allowed in the church. Friends are welcome outside of the church. Everyone is welcome at the cemetery services immediately following the church services.

In lieu of flowers, please donate to the Williams Unified School District Athletic Association in Ernest Lugo’s name. We ask everyone attending his services to wear any sports jerseys, tee shirts or hats to honor and celebrate Ernie.