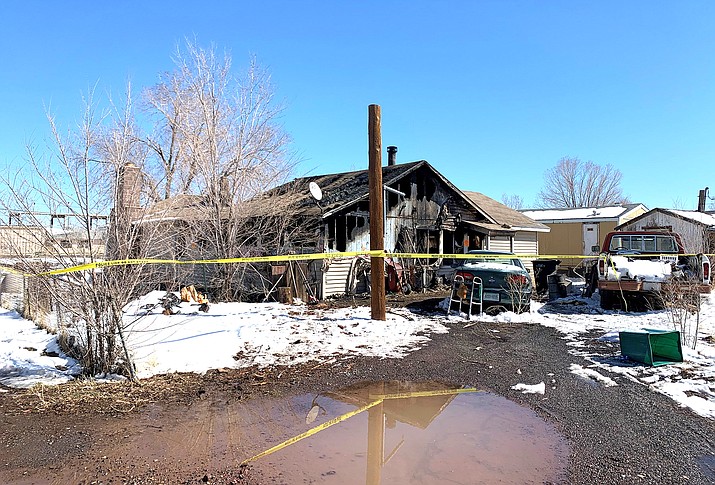 A woman died in a house fire on Boyd Street in Williams March 16. The cause of the fire is under investigation. (Photo/WGCN)

The cause of the fire is still under investigation, but Williams Police Department said it appeared to be accidental.

Williams resident Josephine Honanie was alone in the house when the fire erupted, according to Williams Police Chief Herman Nixon. Honanie died at the scene.

“Our fire department did a great job yesterday. They busted their butts – we had five firefighters out there, that’s all we had and they worked their butts off,” Nixon said.

Firefighters arrived on-scene to find the home fully engulfed with flames coming through the roof and windows, according to Williams Fire Captain Chase Pearson.

“We saw flames self-venting from the Charlie, Delta corner and out the windows,” he said. “We immediately pulled the 1 3/4-inch (hose) to the back of the house and immediately got water on the fire.”

Fire crews were also notified of a victim possibly trapped inside.

“We pulled our line to that area and immediately started putting water on the fire,” Pearson said. “Before firefighters could make entry, they had to make that space tenable. The space was untenable even for protected firefighters.”

A Williams police officer was first on scene but was unable to enter the house because of the extreme fire conditions, Nixon said.

“The first officer on scene tried to get in the back door but it was so fully involved and the door was so hot she couldn’t even touch the door,” Nixon said.

Once firefighters began applying water to the structure, they were able to suppress some of the fire and began cooling the structure.

“Once we got some initial knockdown, we made entry, found the victim and brought the victim out to Williams Police Department and an awaiting ambulance,” Pearson said.

The victim appeared to be suffering from heavy smoke inhalation, according to Nixon.

“It was deep-seated, it was in the attic,” he said. “We were still in offensive strategy trying to save property and working inside the house.”

Pearson said firefighters struggled to access all areas where the fire was burning. Crews were eventually pulled out of the structure as part of the roof collapsed.

After the roof collapse, firefighters finally had access to all hot spots and hidden fire, and fire units were able to clear the scene around 7 p.m.

The house was a complete loss and has since been condemned by the city of Williams.

“The city will work with the family to figure out what they’re going to do about the house,” Nixon said.

Nixon said the cause of the fire remains under investigation.

“We don’t know,” he said. “Where the fire originated, there was an old wood-burning stove and the smokestack hadn’t been cleaned – that got very, very hot and started a fire in the attic, but again, they’re still looking into it.”

A victim advocate with Williams Police Department is currently working with the family.

“The daughter was at the scene of the incident,” Nixon said. “With the stress of what happened, we ended up taking her to the hospital, she went into seizures. Our victim advocate is working with them.”

Nixon said donations to the family can be made through WPD Victim Witness Advocate Tina Burrell at tburrell@williamsaz.gov.

A GoFundMe account has also been set up on behalf of Nathina Cardenas, Honanie’s daughter.

“As some of you may know Nathina and her mom were involved in a horrible house fire. With a heavy heart I write that Nathina's mom did not make it. Nathina was very close with her mom and I cannot express this loss that our friend is going through with any amount of words,” organizers stated.

Donations will be used to help the family with hospital bills, funeral costs and other needs.

“We would also like to help get one of her daughters here to be (in) Arizona in this time of need. Please if you are able to help in any way we would greatly appreciate it, any amount helps. If you are unable to donate, we understand and ask that you keep Nathina and her family in your prayers,” organizers stated.