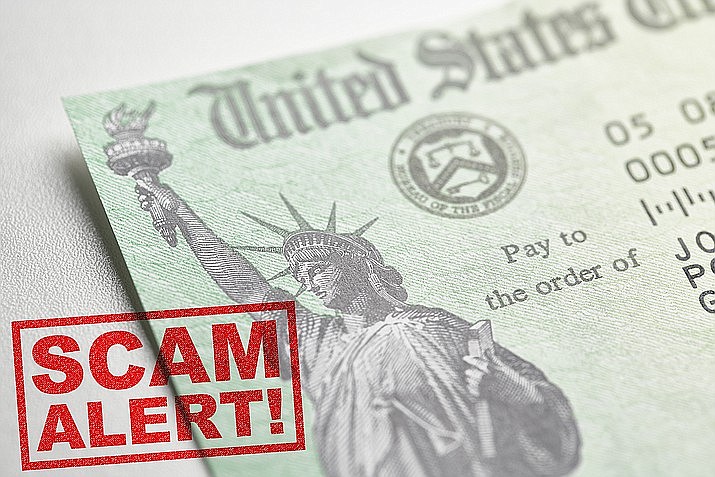 With the third round of economic stimulus checks on the way to many Arizonans, the Attorney General’s Office (AGO) has seen an uptick in consumer complaints involving unsolicited text messages from scammers pretending to be from the Internal Revenue Service (IRS).

The phishing text messages typically include a URL that redirects consumers to an imitation IRS website. These scammer sites, which may appear legitimate, will ask for personal and financial details, including bank account information, which is a scam, the news release stated.

“These shameless scammers surface every time a new round of stimulus funds are set to be distributed to Americans,” said Brnovich in the news release. “We are reminding Arizonans to be patient and remain vigilant against giving in to scams that exploit economic impact payments.”

• Beware of and do not respond to unverified calls, text messages or emails that ask for personal identifying information.

• The IRS will not initiate contact with you by email or text message regarding your economic impact funds, nor will any other government agency.

• Never click on any links or use any phone number provided within an unsolicited text message.

• If you receive a suspicious message that you think is from a government agency, independently verify the contents by contacting the agency using the designated information listed on their official website.

• You will never have to pay a fee to receive your economic impact payment, and a third party cannot speed up the disbursement process.

• You can securely check your economic impact payment status, including how or when the funds were issued, using the IRS’ “Get My Payment” tool. If you did not receive any payments or received less than the full amounts, you may qualify for the Recovery Rebate Credit, but you must file a 2020 tax return to claim the credit even if you don’t usually file. Additional information regarding economic impact payments can be found on the IRS website.

As a reminder, the Attorney General’s Office has a COVID-19 webpage dedicated to providing consumers with the latest information on coronavirus scams and frauds.

As of Tuesday, March 16, none of the local quad-city police agencies have encountered a recent case regarding a stimulus check email or text scam.

However, agencies like the Prescott, Prescott Valley and Chino Valley police departments are always on top of ensuring the public is aware of any scams going around and how they can prevent themselves from becoming a victim.

“Just like any other scam that we have talked about over the years, the things that people need to watch for are any requests for personal information that come over the phone or via email or unsolicited calls. Typically, you’re not going to see those from the federal government when they’re issuing the checks,” Prescott Police Lt. Jon Brambila said. “That’s the biggest thing is that if you get an unsolicited text, call or email I would be weary of anything like that.”

Chino Valley Police Lt. Randy Chapman has been echoing the same advice on scams for over 15 years now.

“Don’t be sending money, don’t give out your personal information to anybody,” he said. “If you suspect that somebody who’s contacted you saying they’re from a company that you don’t think is legit, tell them you’ll call them right back and actually look up the legitimate phone number for that company and call them so they can let you know if they were actually trying to contact you or not.”

“So far, this scam has not been a significant source of calls to the Sheriff’s Office,” D’Evelyn said. “And as always, we suggest that family members/caregivers should alert senior aged family who may not be aware of such scams and are generally the targeted group for such activity.”

While the Attorney General’s Office does recommend people suspicious of a potential scam contact them directly, local law enforcement agencies can also be contacted at the following (for non-emergencies):