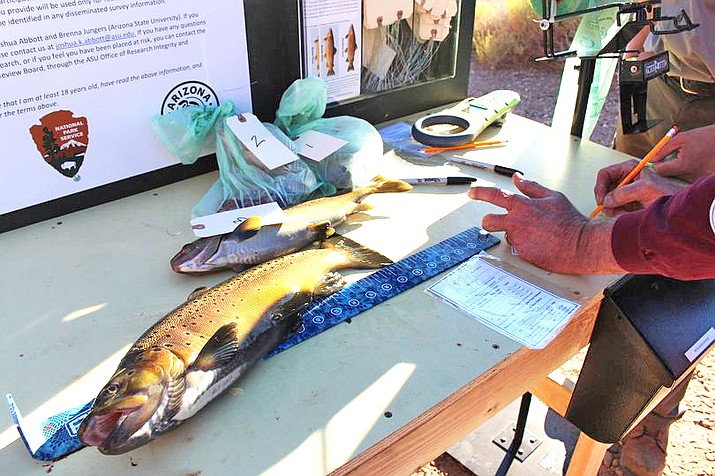 Incentivized harvest of brown trout on the Colorado River is being conducted to help thin the brown trout population. (Photo/NPS)

LEES FERRY, Ariz. — Anglers can now earn cash bonuses for participating in the Brown Trout Bonanza on the Colorado River between Glen Canyon Dam and the Paria River, April 1 - May 2.

Although highly esteemed by anglers for its elusiveness and tasty meat, the territorial brown trout has become a management nightmare for the National Park Service (NPS) over the past 10 years, as the voracious fish eats everything, including the endangered humpback chub, and is reproducing at a rapid rate.

Now, Grand Canyon National Park, Glen Canyon National Recreation Area and the Arizona Game and Fish are looking to those devoted anglers for help in reducing the brown trout population by paying them to fish.

Starting Nov. 11, 2021, licensed anglers are being paid $33 per brown trout over 6 inches caught from the Colorado River, between Glen Canyon Dam and the mouth of the Paria River. The program is expected to last three to four years

There is no limit on the number of brown trout that can be harvested and turned in for the reward and bonuses during this month-long kick-off event. To participate in the Brown Trout Bonanza program, anglers must have a valid Arizona fishing license. Only artificial lures with barbless hooks are allowed.

In addition to these bonuses, there will be a month-end bonus of $500 for the person who turns in the most brown trout caught from the Colorado River between the dam and the Paria River between April 1-May 2.

There will also be a judged contest for the best photograph of one or more brown trout ($250 bonus) and the best video of a brown trout being caught from the river ($250 bonus). It is hoped these bonuses will attract anglers from Page, Flagstaff, and other areas of Arizona to experience the great brown trout fishing and immense beauty of this portion of the Colorado River, and that they will return often to harvest brown trout. (Anglers from other states may participate with an out-of-state AZ fishing license.) More information about the Bonanza rules and bonuses, as well as the Incentivized Harvest of Brown Trout reward is available from Glen Canyon National Recreational Area at www.nps.gov/glca/planyourvisit/brown-trout-harvest.htm.

The Bonanza is sponsored by Glen Canyon National Recreation Area in partnership with the Glen Canyon Conservancy. It is part of the Brown Trout Incentivized Harvest Program, taking place on the Colorado River between Glen Canyon Dam and the Paria River.

In mid-May, the rewards and bonuses will be paid out to participating anglers by Glen Canyon Conservancy, which is administering the program for the park.


The brown trout population in the Colorado River between Glen Canyon Dam and the Paria River has steadily increased since 2014. As adults, brown trout primarily feed on other fish, threatening downstream native fish species. The goal of this program is to determine if the Incentivized Harvest by anglers can help manage and reduce the number of brown trout in this stretch of the Colorado River. This management option was highly favored during a public review of potential management tools when compared with other tools, such as intensive mechanical removal efforts or disturbance activities during the spawning period.

More information on the Arizona Game & Fish Department angling regulations for this area is available at https://www.azgfd.com/fishing/regulations.