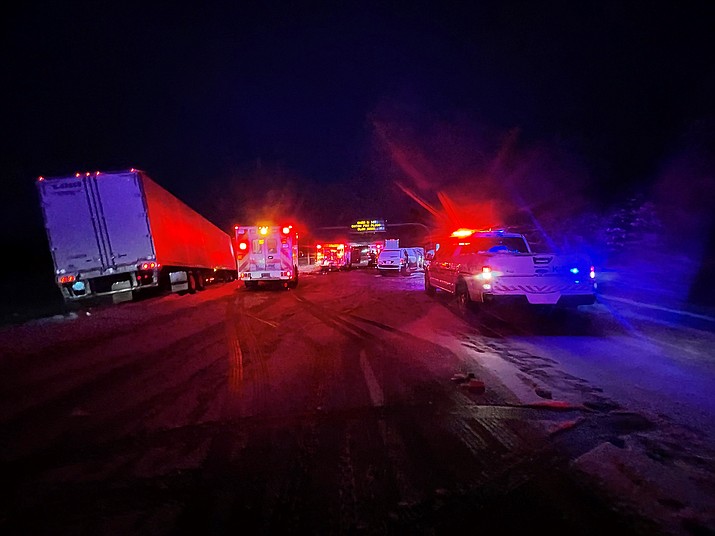 According to the Arizona Department of Transportation, the westbound and eastbound lanes of I-40 came to a standstill around 3:30 p.m., Saturday, with several semi-truck crashes and disabled vehicles on the icy stretch of road.

As the hours ticked by, many drivers expressed their frustration with the lack of information and extreme cold as they waited in their vehicles.

One Twitter user wrote, “Could you please help move things forward? We’ve been stuck for 7 hours and everyone has reached a breaking point. It’s 11 p.m., freezing and we have no light at the end of this.”

“We have been stranded 10 hours. No movement at all. Not five feet. All we are told is no timeframes. Are we needing to plan on spending the night? Many families are in crisis and we’ve seen zero people. Not a single DPS in 10 hours driving by,” said Twitter user Greg Freeman. 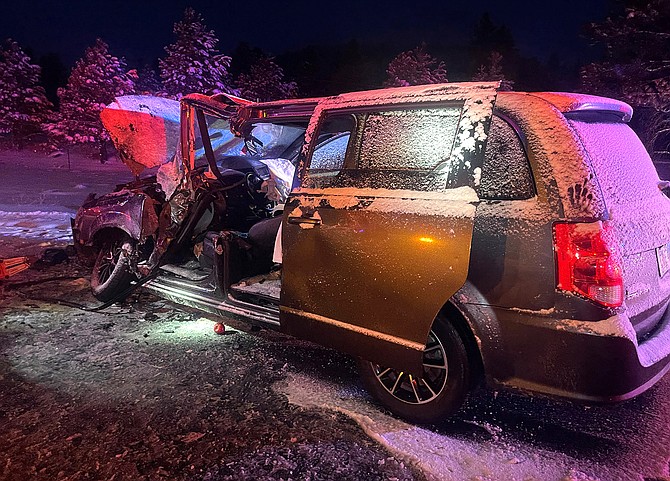 Williams Fire responded to I-40 March 13 for a report of a trapped victim in the driver seat. Firefighters used extrication equipment to remove the door and B post on the driver side in order to free the victim. (Photo/Williams Volunteer Fire Department)

Although there were a handful of accidents and slide-offs on westbound I-40, the Arizona Department of Public Safety (AZDPS) said there were no fatalities and the backup of traffic was related to drivers dozing in their vehicles.

“The big problem we had was commercial vehicles and drivers of passenger vehicles sleeping in their cars,” said Bart Graves, media relations specialist with AZDPS. “Troopers literally had to continually knock on drivers' windows to wake them up and get them moving.”

Graves said another factor was an excessive number of commercial vehicles traveling westbound at the time of the storm.

“Due to the storm, traffic moved slowly as drivers had difficulty seeing the road,” Graves said. “Troopers responded to several collisions and slide offs, however, nothing was blocking the roadway.”

The Williams High School baseball and softball team bus was one of the hundreds of vehicles trapped in the traffic. The bus was returning from scrimmages with Camp Verde when it came to a stop around 9:30 p.m.

“(The driver) had plenty of fuel to run the bus overnight if we had to, allowing him to idle and run the heat,” said Evans. “We checked on that with him several times throughout the night.”

Although the bus didn’t arrive back in Williams until 2:15 a.m., several parents traveled backroads to reach the stranded athletes and return them to Williams earlier.

“Savvy parents who know the back roads, forest roads, etc. were able to get close enough to the bus to deliver food and bottled water, and take some athletes home,” Evans said. “It was staggered wait times on the bus in traffic, depending on the athlete and when they got picked up.”

Evans said the last athletes were picked up around midnight from the highway.

“A special thank you to the parents who brought food and water, who brought kids home,” Evans said. “And to Mr. George Otero for braving the elements and seeing that everyone, although unconventionally, got home. Special thanks to (AZ)DPS, WPD and other first responders for checking in on our bus while it sat idling on the 40.”

Other storm closures included Interstate 17 northbound between SR179 and Flagstaff and State Route 89A between Sedona and Flagstaff.

Williams Volunteer Fire Department also responded to vehicle accidents on I-40, one that involved a mechanical extraction of a victim trapped in a vehicle.

Most I-40 traffic began moving in the early morning hours of March 14.

For the most up to date traffic information in Arizona, visit ADOT's website at www.az511.com.