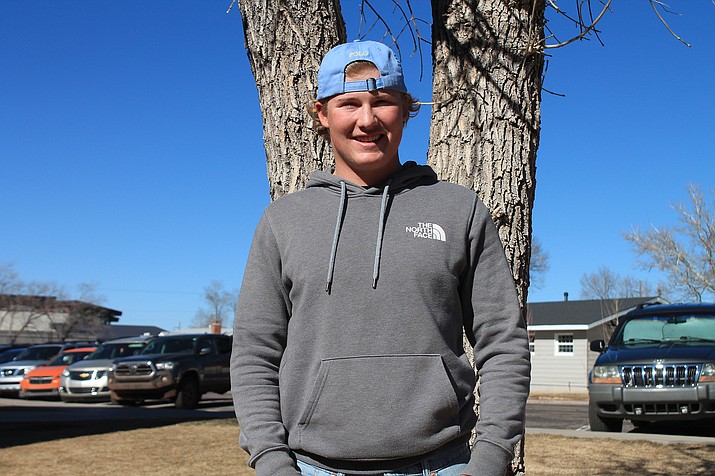 Cody is a senior at Williams High School. He has attended Williams schools since first grade.

Cody has participated in STUCO and Student Leader Advisory Committee (SLAC). He also played in football and baseball all four years.

He said Mr. Schober and Mrs. Gutshall have been a big influence during his high school years.

Cody said his favorite memories from high school are homecoming and going to baseball trips in River Valley, Tempe and Chandler.

“It’s always a fun, bonding experience,” he said. “You just chill for the weekend.”

He said winning state championships during his freshman and junior year were also favorite memories.

In his spare time, Cody enjoys spending time outdoors — hunting and fishing. He also likes to cut wood for elderly members of the community and shovel snow during the winter.

Cody worked as a plumber throughout high school as well as doing yard work for pay.

This year, Cody earned the President’s Scholarship at Arizona State University, which allows him a full-ride to ASU. Cody plans to attend ASU in the fall where he has been accepted into the aviation program. He plans to become a passenger airline pilot.

“I want to fly airline jets,” he said.

Cody said for him, the coronavirus pandemic has changed his senior year. He said because of the pandemic, school spirit has dropped considerably.

“The pandemic has taken a toll on our school,” he said. “I see from last year —we just played a crazy, spirit video and to see it compared to today, it’s changed a lot. I haven’t been to a school basketball this year to watch my friends play — it’s not the same. I don’t want to see school spirit go extinct.”

Cody said he will miss Mauricio Gonzales and Kasheda Sutton the most.