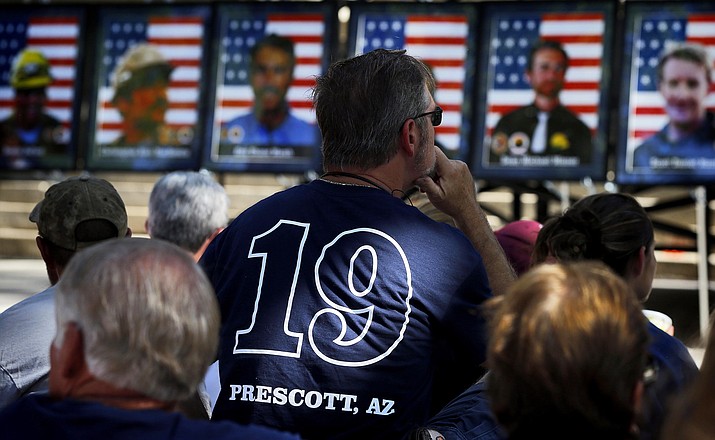 People listen as the 19 Granite Mountain Hotshots are memorialized on the first anniversary of their deaths, June 30, 2014, during a ceremony outside the Yavapai County courthouse in Prescott, Arizona. (AP Photo/Matt York)

PHOENIX (AP) — Arizona Gov. Doug Ducey ordered flags on all state buildings to be flown at half-staff June 30 to honor the heroism of 19 firefighters who died eight years ago battling a wildfire near Prescott.

All but one of the Granite Mountain Hotshots crew members died on June 30, 2013, while fighting the lightning-caused Yarnell Hill Fire.

A memorial state park was dedicated to the fallen firefighters in 2016 in the area of the wildfire.

“Arizona lost 19 heroic firefighters on this day eight years ago to one of the most devastating wildfires in state history,” Ducey said. “These brave men gave their all in defense of our communities, and their service remains among the greatest ever known to our state. We will never forget their sacrifice.”

The governor also honored all fighting wildfires across Arizona, stating he was grateful for their selflessness, bravery and dedication to protecting fellow Arizonans.