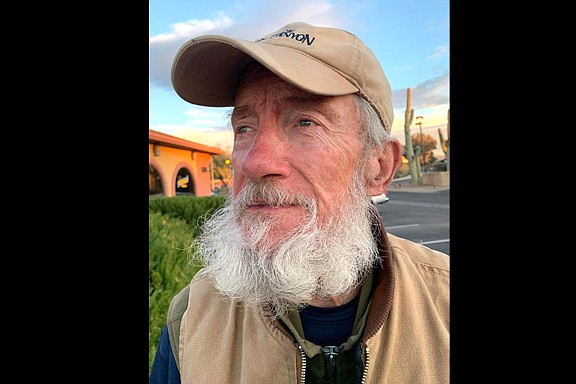 Mike Sheehan, a retired writer and artist who lived near the South Rim of the Grand Canyon died unexpectedly at his home on June 14, 2021, at the age of 82.

Mike was born in St. Paul, Minnesota on April 25, 1939 to Ermine Stocking and James O’Neill Sheehan. He graduated from the University of Minnesota and worked in publishing, utility writing, copy editing, and wrote about his great grandfather Lt. Timothy J. Sheehan in a historical published novel “Dogs in The Hot Moon”.

Following college and serving in the U.S. Army Reserves, Mike spent time at Malibu Beach in California; years he spoke fondly of throughout his life. He moved to Tucson, Arizona in 1979 with his first wife, Rose Villareal.

In later years, Mike oversaw the raising of his straw bale cabin in northern Arizona where he resided with his wife Carole until his death.

Mike was an avid hiker and outdoorsman. His passion for exploring beautiful places led him to meet and fall in love with his wife Carole, whom he met on the North Kaibab trail in the Grand Canyon. Their shared passion for this north country inspired decades of living and recreating in a land that held spiritual meaning to him, a gift he has passed on to his stepchildren and grandchildren.

Mike was a devoted husband. As cheerleader to his grandchildren, he was able to gently and firmly provide teaching moments that impacted them in a positive and lasting way. His humble and kind traits can be described in their words: affectionate, accepting, compassionate, selfless, gentle, an individual with a beautiful aura who was often referred to as “the kindest person I’ve ever known”.

Mike relished the time he spent with them and they adored his selfless and giving life lessons that will carry on for generations. Mike loved all his family members and the many friends he made throughout his life.

Prior to his decline in health, Mike enjoyed working at the Grand Canyon Visitor Center in Tusayan, Arizona, passionately helping travelers plan their visit to one of the world’s seven wonders, and with The Gallery in Williams, Arizona; where he displayed his leather carvings.

In his Woodland Ranch neighborhood, Mike delighted in playing his harmonica with friends who affectionately referred to themselves as the “Red Butte Ramblers.”

The family gathered for a private memorial to celebrate Mike’s life. He will be dearly missed by all who knew him.