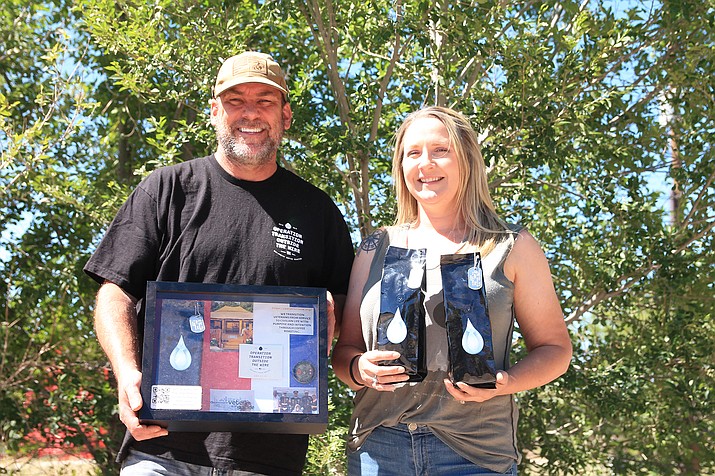 Thomas West and his wife Shannon Francis are helping veterans through their non-profit Operation Outside the Wire. They are selling coffee memberships to help support their dream of opening a ranch that will help veterans transition from military to civilian life. (Loretta McKenney/WGCN)

Operation Transition Outside the Wire is a non-profit, veteran owned company that has plans to develop 130-acres north of Williams for a ranch that will house veterans and their spouses for up to six months as they transition from military to civilian life.

The organization is currently working on a site plan for the ranch. Once complete, veterans from across the U.S. will be welcomed to the ranch.

The property will host 25 safari-style tents for couples, families or individuals to live in during their stay, along with a mess hall, common area for gatherings, a K9 training facility for service dogs, a multi-service center and a coffee roasting and distribution facility.

The facility is being funded through coffee memberships sold by Operation Transition Outside the Wire.

According to Thomas West, president of Operation Outside the Wire, the organization chose not to seek or accept any government grants because of certain limitations, including services that can be offered to veteran spouses and families.

"Because we take the spouse, they usually don’t fund those types of programs,” he said “We are 100 percent funded by our coffee."

The coffee beans are directly sourced from private plantations in Guatemala and Nicaragua and roasted in Williams.

“The coffee is really a result of vets not wanting a handout…when you come through the program and you roast coffee, you’re earning your way,” West said.

Those who purchase coffee memberships can choose how often they want coffee delivered as well as access to “member” only content including the Honor Wall and a monthly newsletter.

West is a veteran, who knows first-hand how difficult the transition from military to civilian life can be.

He served in the U.S. Marine Corps from 1987- 1991. He was station in Camp Pendleton and Panama and served in Desert Storm.

After the military he moved to Kansas City, Missouri, where he later became homeless and turned to alcohol before attempting suicide.

“It was my buddies who rallied around me and helped me out,” he said. “Later on, I went on to college and had a very successful career in aerospace and defense — it’s not very related to coffee, but I never forgot how hard that was.”

In 2018, West and his wife Shannon Francis, began outreach to veterans.

“It’s kind of desensitizing — you see it on the news about 22 veterans a day (attempting suicide) but when you see it up close and personal, you have to get involved, you have to do something,” he said.

With that in mind West decided to start a non-profit to help veterans in their transition.

A place of transition

During their time at the ranch veterans and their spouses will be offered housing, employment, transitional support services, transportation, community and resources to help with job searches, higher education and whatever other needs that come up.

“This gives you the necessary time to develop your new purpose,” West said.

West said they chose Williams because of its access to nature.

“Any time we have veterans, we bring them here to camp and we get them away from those toxic locations. What better place to come out and unwind?” he said. “It’s about saving lives more than just a vacation at 6,500 feet.”

After veterans leave the program they are offered continued support through Patriot Guard Riders.

West said it will take 15,000 members to accomplish the organization’s goal, which is to accommodate 25 veterans and their spouses. They currently have 200 memberships for their coffee.

Operation Transition Outside the Wire is located at 117 West Route 66, Suite 135 in Williams.

More information or to purchase a coffee membership is available at www.operationtotw.org.