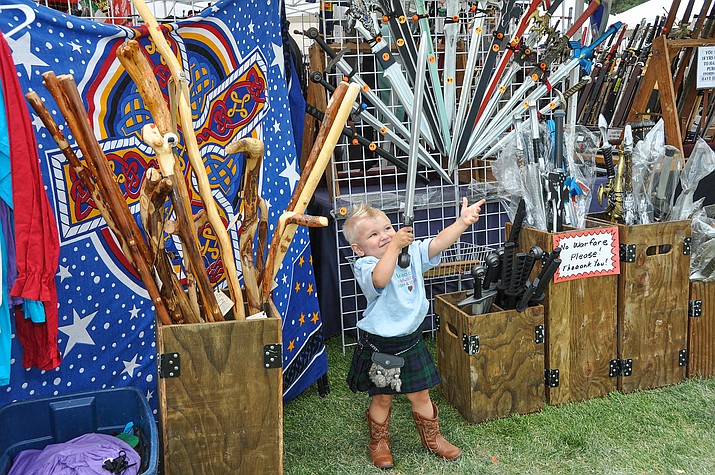 The Arizona Highland Games and Gathering will be at the Williams Rodeo Grounds July 17 and 18, bringing food, drink, games and music in the Celtic tradition to the pines of northern Arizona.

After 23 years in Flagstaff, the group is bringing the event to Williams after encountering scheduling problems at their previous location.

“This is scaled down from our normal festival,” said event organizer Jude McKenzie. “We will have all that is usually at the Celtic Festival, but we simply don’t have room for the huge educational component we usually have.”

The Northern Arizona Celtic Highland Association has hosted The Arizona Highland Celtic Festival at various locations in Flagstaff over the years. The event began at Wheeler Park and then moved to Thorpe Park, Foxglenn Park and most recently Ft. Tuthill.

The Flagstaff event draws up to 8,500 people over the two-day weekend, McKenzie said.

“We get a lot of people from all over the world who return each year,” she said. “We just keep growing.”

The event focuses on sharing the Celtic traditions and history with participants. Groups from all over the United States converge at the festival to share music, food, activities and history.

“If you walked into the gathering, that is the hallmark of what you see — people want to give,” McKenzie said.

There will be a variety of food at the event, such as a vendor who brings dishes made from traditional Highland beef.

There will also be Scotch whiskey tasting, with a variety of beer and whiskey for sale.

“We do something no one else does and that is offer spirits of the Celtic regions,” McKenzie said. “Spirits is used loosely because some of the spirits are wine or hard cider. We have something either from or representing each of the eight Celtic regions.”

Several musicians will be at the gathering, including the Wicked Tinkers, who have been playing haunting, heart-pounding bagpipes and tribal drums as a professional touring band since 1995.

According to their website, the Wicked Tinkers merge the best of modern, almost rock-and-roll energy with the hypnotic, insistent grooves of their Gaelic ancestors.

“Wicked Tinkers creates music to set your jaw, put a fire in your belly, a glint in your eye and a dance in your feet,” they said.

Children will enjoy interacting with characters from classical Celtic mythology, such as Cailleach Bhuer, or the “Blue-faced Hag,” McKenzie said.

“She walks with a staff and wherever her staff touches the ground, it snows,” she said. “She also makes mountains grow."

In addition, the “Green Man” will be on hand to share his wisdom about the Earth.

For history and genealogy buffs, several organizations will be present to share information about Celtic clans and societies. This includes groups such as the Irish Cultural Center and Prescott Celtic Society.

“Out of the goodness of their hearts they set up a tent and they have loads of history and stuff to share,” McKenzie said.

Tickets for the event are available online at http://www.nachs.info/festival.shtml.