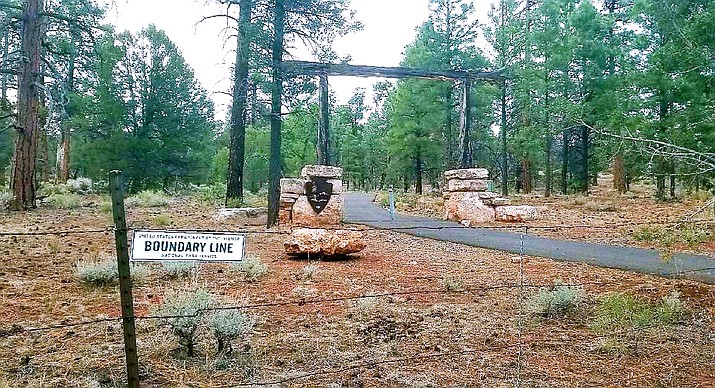 Grand Canyon National Park (GCNP) and the neighboring town of Tusayan lie at the border between the north and south sections of Kaibab National Forest, and portions of trails located within the forest lands cross into GCNP's boundaries.

“There are trails that cross from the park and into the forest,” he said. “What that means is the only access to the trails that may be open will be inside the park, not inside the forest; for instance the Greenway Trail, which runs from behind the IMAX Theater in Tusayan all the way to the rim, (and) (Grand Canyon) village in the park. It won't be accessible from the park boundary down to the IMAX.”

In addition to trail closures, dispersed camping areas and other recreational sites located within the national forest boundaries will be closed until further notice.

Blasi said the Forest Service will be placing signs to indicate which areas are off-limits to the public.

Exempted from the closures will be emergency services, Arizona Fish & Game personnel, and ranchers bringing water to cattle and other livestock. Also exempted are those who own property, or inholdings, within the national forest lands.

While the Forest Service is attempting to notify all campers and other visitors about the closures, hikers in the backcountry areas may not be reachable.

Blasi said that those who are too far out to be found and unaware of the closures will be treated fairly by law enforcement if encountered, and will not be considered in violation of the law; however they will likely be escorted out if they are found during patrols.

Deliberately violating closures and fire restrictions is punishable as a Class B misdemeanor with a fine of up to $5,000 for an individual or $10,000 for an organization, or up to six months in prison, or both. Violators will also be required to make a mandatory appearance in federal court.

According to Blasi, those who have already been issued backcountry permits and other recreational reservations through recreation.gov will be entitled to refunds by providing their reservation numbers to the company.

“We're going to make sure that anyone who has a reservation that they paid for is going to get refunded,” he said.

The decision to close the forests comes at a time of extreme drought and high wildfire activity across the state, and Blasi said the decision was made because of lack of resources to be able to keep up with current demands.

“It was a coordinated effort between the Coconino and the Kaibab,” he said. “The number of large fires that are occurring now statewide across not only Arizona but New Mexico, and the regional office in Albuquerque are all coordinating the events. Everybody was involved in the decision based on the fact that we're at one of the lowest precipitation levels we've been in 30 years.”

“We're basically running out of resources to attack new fires, so as a result every new fire that's starting, for example the Rafael Fire, people are going to be in trouble if we can't get after them.

Conditions in the forest are literally, explosively tinder, and with 25 mph winds, there is really nothing we can do. Even the air tankers are all committed at this point,” he said.

With Arizona's monsoon season set to begin June 15, Blasi said he hopes the rain will come.

According to a recent report by Arizona Central, there are equal chances of above, near, or below average rainfall for most of Arizona this season, with no clear indication of precipitation levels so far.

The report stated that 2020's monsoon season was the driest in recorded history, but weather experts are hoping for a better outcome this year.

More information about closures is available at fs.usda.gov.