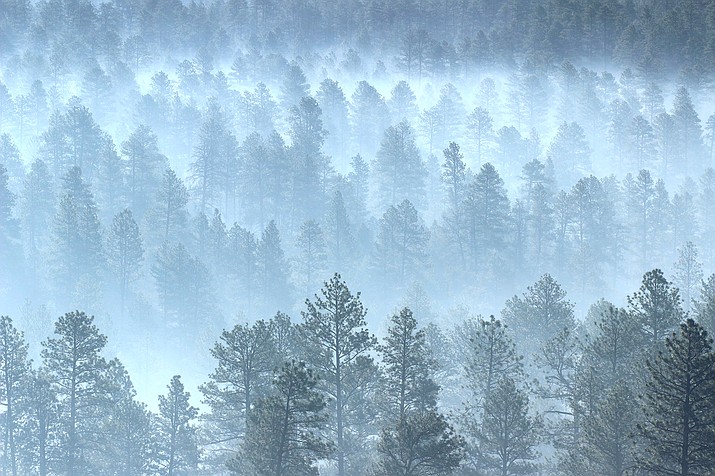 Smoke shrouds forest on the west flank of the Mangum Fire that burned in June 2020. (Photo/Kaibab National Forest)

Currently, the risk of wildfire in the Kaibab National Forest in the Tusayan Ranger District is considered to be “extremely high,” as exceptional drought conditions continue to persist state-wide.

According to the Arizona Department of Forestry and Fire Management, Stage 2 restrictions prohibit the building, maintaining, attending, or using a fire, campfire, charcoal, coal or wood stove, including fires in developed campgrounds or improved sites.

Additionally, smoking is prohibited, except within an enclosed vehicle or building.

Discharging of firearms is also prohibited, unless it is being used to engage in a lawful hunt pursuant to state, federal, and tribal regulations.

For a complete list of restrictions and exemptions, visit https://dffm.az.gov/fire-restrictions.

During the Tusayan Fire District (TFD) board meeting June 10, Tusayan Fire Chief Greg Brush reported a recent illegal campfire incident which took place within the Tusayan Ranger District of the Kaibab National Forest during Stage 1 Restrictions, which prohibit the use of campfires within dispersed camping areas.

Brush said the campfire was located half a mile north of Long Jim Loop in Tusayan, and was reported by Coconino County Sheriffs Office. A citation was issued to the offending party, who was reported to be a local resident.

Brush said that recent illegal campfire activity could be caused by locals moving deeper into the woods in an attempt to avoid detection, which is highly dangerous.

Brush said TFD is asking the public to remain vigilant and report any illegal campfires, outdoor grills or the burning of yard waste, by calling 911.

“We are really concerned. Humidity is down, winds are up, (we’re in) exceptional drought,” he said.

Additionally, the Arizona Department of Forestry and Fire Management has posted reminders that state target shooting and fireworks are never allowed at any time of year in Arizona.

More information is available at www.https://dffm.az.gov.