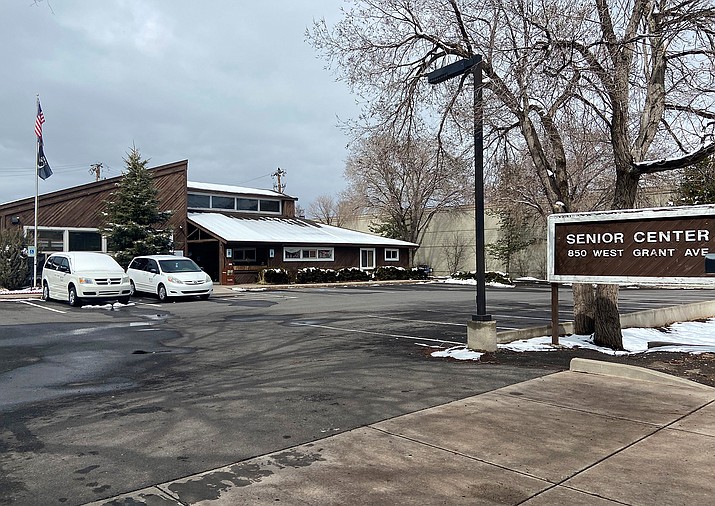 The operation of the Williams Senior Center has become a point of concern for some community members. (Wendy Howell/WGCN)

“We are angry, frustrated and feel helpless at what is happening at the Senior Center,” Senior Center Board member Tora Moody said in a joint letter she read to the council. “We aren’t just old senile idiots. We refuse to be treated as such.”

After Moody spoke, several Senior Center board members and others spoke about their negative experiences with new Coconino County staff.

“Did you know they took today’s lunch and put it on a paper plate, wrapped up in plastic wrap and (delivered) it to the seniors?” one member said. “The sandwich is soaking wet from the salad — would you like to eat a wet sandwich?”

The operation of the center has reached a crisis point, as city councilmembers and Mayor John Moore have met with Coconino County staff and supervisors to remedy the situation, to no avail.

“I told John (Moore) we are wasting our time,” said Williams Vice-Mayor Don Dent, “I don’t think they (Coconino County) have any intention of changing much.”

The Williams Senior Center building is owned by the city of Williams, how ever, the operation of the facility has been in the hands of Coconino County since the mid-1970s.

Early in the COVID-19 pandemic, Coconino County implemented safety precautions including social distancing and mask wearing in all county buildings, including the Williams Senior Center.

According to the county, it was necessary to discontinue on-site meals, social activities and programs at the center. Meals on Wheels, as well as drive-up and walk-up meals service, however, continued.

“It about brought tears to my eyes this winter to see people standing out in the damn snow, because of COVID (restrictions), waiting half an hour to get their food because they (staff) wouldn’t let them come into the building,” Moore said.

On April 5, the center reopened to serve seniors in the dining room. Recreational activities began on May 11 for seniors with the center open 8 a.m. to 3 p.m.

However, according to former director Dolores Parades, the number of people participating in the congregate meals at the center and the number served by the Meals on Wheels program have dropped significantly in the past year.

“Tora and I have been delivering meals to seniors who have dropped out of the program or who they will no longer deliver to,” Paredes said.

Paredes went on to say she has observed several health violations by the county staff.

“They need to keep the temperatures and you need to serve in a certain amount of time,” she said.

The majority of the complaints from participants were regarding the way they were treated at the facility.

“Many seniors have quit coming to the center because they are treated badly and the food is horrible, many Meals on Wheels clients have quit for the same reason,” Moody said. “All we want is some respect, all we want is someone to care about our opinions like we cared about yours.”

In May, Coconino County Board of Supervisors Chairman Matt Ryan said the county was working on creating a more inviting atmosphere and fostering relationships with the seniors and the community.

However, Moore doesn’t believe any new action will be taken by the county.

After the discussion, Williams city councilmembers unofficially agreed to take over the operations of the Senior Center, but wanted more time to research costs.

Although Coconino County contributes money for the operation of the facility, about 2/3 of the funding comes from grants and fundraisers, according to former senior center director Darlene Foster.

“We want our center back, we want to be involved with the decisions that are being made about us, but not for us.” Moody said. “We want the community to interact with us, we want to say this isn’t right and not be laughed at or ignored.”