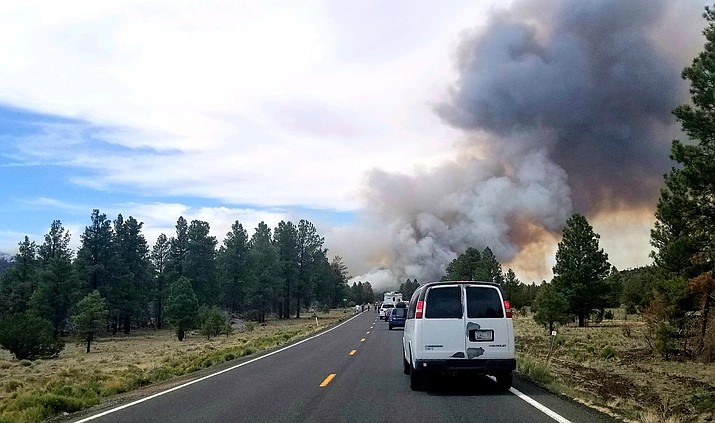 The Arizona Department of Transportation reported June 7 that U.S. 180, north of Flagstatff, was closed in both directions because of a brush fire. The highway was closed between mileposts 235-248. (Lo Frisby/WGCN)

FLAGSTAFF, Ariz. — The Slate Fire kicked off June 7 approximately 23 miles northwest of Flagstaff on the west side of U.S. Highway 180, closing Highway 180 in both directions.

As of June 7, the fire had grown to roughly 100 acres. The fire was called in by Coconino County Sheriff's Office at 3 a.m.

According to the U.S. Forest Service, portions of Highway 180 would be closed throughout the remainder of the day and into the evening as responders worked to contain the fire and conduct burnout operations.

About 100 personnel, including three Hotshot crews, six engines, a helicopter, water tender and dozer reported to the incident.

Motorists were asked to avoid Highway 180 north of Kendrick Park, and visitors to the Grand Canyon National Park were asked to use Highway 64 from Williams in order to access the entrance to the park.

Though no structures were threatened, recreation sites in the area, including the Red Mountain and Slate Mountain trailheads and Kendrick Cabin were closed.