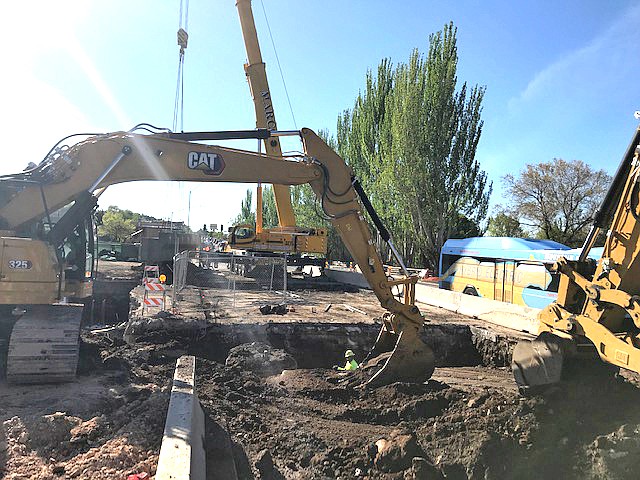 A replacement of the Rio de Flag Bridge will take place June 10-18. Drivers should plan ahead to avoid the closure at that time. (Photo/ADOT)

PHOENIX – With Historic Route 66 closing in front of Flagstaff City Hall for one week beginning June 10, drivers should plan ahead to avoid the closure during that time.

Historic Route 66, also known as Business Loop 40, will be closed in both directions between US 180, known locally as Humphreys Street, and the Sitgreaves Street and Santa Fe Avenue intersection from 9 p.m. June 10, to 6 a.m. June 18 to replace the Rio de Flag Bridge. Detour signs will be in place to direct traffic around the closure.

Drivers heading north on Milton Avenue toward downtown Flagstaff will be detoured onto Butler Avenue to San Francisco Street. Local drivers, and those visiting the area from the Valley and southern Arizona are encouraged to use I-40 eastbound to Butler Avenue to bypass the traffic impacts due to construction.

Drivers heading south on U.S. 180 are encouraged to use Switzer Canyon Drive to Historic Route 66 to bypass traffic impacts. Drivers that head south on U.S. 180 in the downtown area, to get to points south and west of the project area, will turn left on Route 66 and use Beaver Street to head south to Butler Avenue and make a right to connect with Milton Road.

Drivers on Route 66 from east Flagstaff can use Switzer Canyon Drive to head north or use Ponderosa Parkway to head south and connect with Butler Avenue to get to points west and south of the project area.

Message boards are currently in place on Flagstaff streets so drivers can begin to plan alternate travel routes.

During the week-long closure, crews will install precast bridge girders and pour a new bridge deck. Fabricating the bridge components ahead of time as opposed to building them in place allows the work to go more quickly, reducing the time needed for these kinds of closures.

The traditional method of replacing an at-grade bridge, like the Rio de Flag Bridge, would require six to nine months of lane restrictions. By using the precast method, drivers have experienced just several weeks of lane restrictions plus the upcoming seven-day full closure to remove and replace the bridge.

More information on the project can be found at azdot.gov/riodeflagbridge.

Summer road construction kicks off in northern Arizona
Extended closure of Fourth Street bridge in Flagstaff planned July 17 - Aug. 3
I-17 closed overnight at I-40 interchange for bridge improvement May 29
Region in brief: Week of Dec. 12
ADOT to improve traffic flow on U.S. 180 on Humphreys Street and Route 66 in Flagstaff
Contact Us
Submit Questions, Comments, or Story Ideas