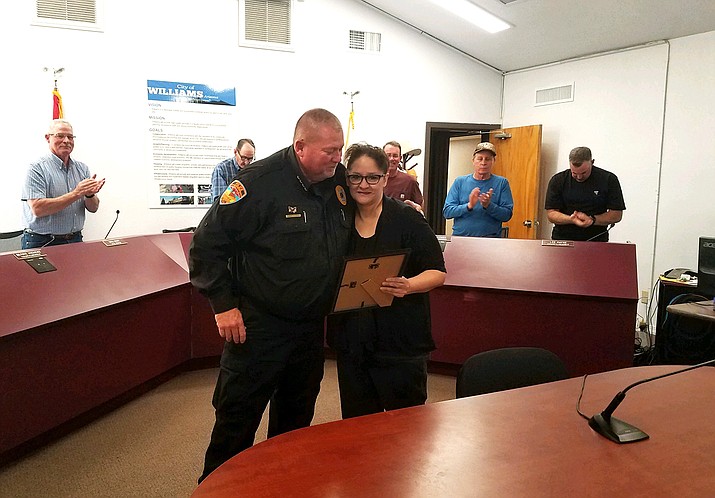 Williams Police Chief Herman Nixon recognizes dispatcher Samantha Sandoval for actions taken during a call April 24 in which she talked a juvenile suspect out of a "suicide by cop" situation. (Submitted photo)

WILLIAMS, Ariz. —Williams Police Department and the city of Williams recently recognized dispatcher Samantha Sandoval for actions taken during a call in which she talked a juvenile suspect out of a planned "suicide by cop" situation.

On April 24, officers received a report that an occupied stolen vehicle out of Flagstaff had been identified near Love's Travel Stop, the suspect was a juvenile and was armed with a handgun.

According to WPD, a short pursuit occurred and the suspect called WPD and spoke to Sandoval informing her he was armed and was going to get out of the vehicle and shoot at cops so they would shoot back and kill him.

“Samantha showed kindness, compassion and professionalism in talking to the suspect and she eventually talked him into following officer’s commands and giving himself up,” said Williams Police Chief Herman Nixon.

The suspect was taken into custody and officers did find a fully loaded handgun in the vehicle.

“If not for Samantha, who is a mother and grandmother, showing compassion and concern for the suspect, this could have ended tragically,” Nixon said.