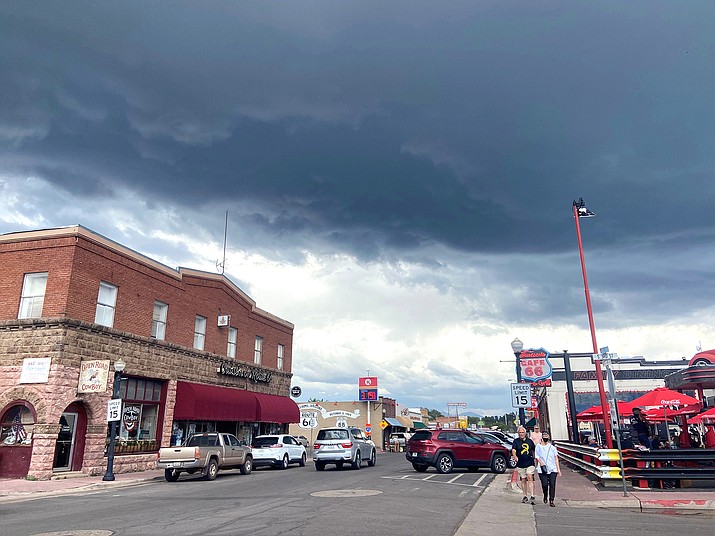 WILLIAMS, Ariz. — The monsoon season in Williams is well underway with the National Weather Service reporting above average rainfall in many areas of northern Arizona.

With the official monsoon season kicking off June 15, the National Weather Service reports that Williams has unofficially received between 2 and 4 inches of rainfall this season. The norm is 1.6 inches for this point in the season. Norm for the full season, which is June 15 through September 30, is 8.03 inches of precipitation.

Grand Canyon South Rim has received .8 - 1 inch of rainfall this season, according to Brian Klimowski with the National Weather Service in Flagstaff. The norm is 1.1 inches for this time of the season. The area received only .34 inches in the 2020 monsoon season.

Grand Canyon’s North Rim has received .94 inches of precipitation this season, as compared to .06 last year. The norm is .73 inches.

Although most people are overjoyed with the much-needed northern Arizona precipitation, forecasters at the National Oceanic and Atmospheric Administration’s Climate Prediction Center have predicted a La Niña winter, which means a greater chance of drier than normal conditions and a significant chance of warmer than normal temperatures in the Southwest.

La Niña will likely emerge September-November and last through the winter.

Long range predictions show abundant precipitation in the Rocky Mountains and the Northeast.

La Niña occurs when waters in the southern Pacific are cooler than normal. Variances in ocean temperatures often affect weather in other areas of the world by influencing the jet stream, the upper-level winds that direct storm systems.

La Niña is the opposite pattern of El Niño (little boy), which features warmer-than-average seawater in the tropical Pacific Ocean.

As things stand with the El Niño-Southern Oscillation (ENSO), neutral conditions are currently present in the tropical Pacific and favored to last through the North American summer and into the fall.

La Niña typically puts a damper on rain across much of the Southwest, which is not welcome for a region that’s been plagued with excessive heat, drought and wildfires for the past few years.

Having back to back La Niña winters is not out of the ordinary.

“Is it all that unusual to have two La Niña winters back-to-back? Nope!” said Tom Di Liberto of NOAA’s Climate Program Office in a blog post July 8.

The Atlantic hurricane season is August to October, and five storms in the Atlantic have already formed this year.