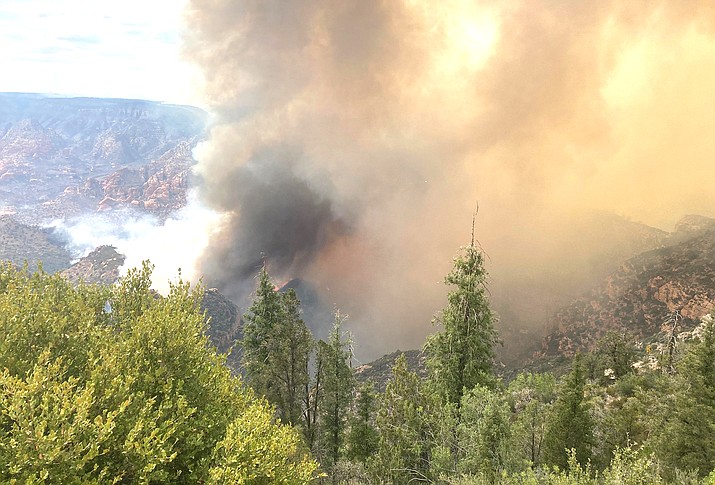 The Rafael Fire is 91 percent contained after burning 78,065 acres in the Sycamore Canyon area south east of Williams. There are currently 281 fire personnel assigned to the fire.

The Rafael Fire was discovered June 18 on the Prescott National Forest, the result of passing predominantly dry thunderstorms and lightning.

The fire was located in a remote area approximately four miles north of Perkinsville. It had grown to 1,000 acres by the morning of June 20. At that time, the Arizona Central West Zone Type 3 Incident Management Team assumed management of the Rafael Fire. Strong winds on June 20, combined with dry fuels and favorable uphill topography in front of the fire, added nearly 18,000 acres for a total of 18,671 acres.

On June 21, the fire added another 5,500 acres to 24,191 acres, and burned actively in Tule Canyon within the Sycamore Canyon Wilderness.

Again, topography and dry fuels drove the fire approximately seven and a half miles on June 22 and by the morning of June 23, the fire had grown to 34, 949 acres.

On the morning of June 24, the Southwest Area Type 1 Incident Management Team 2 led by Incident Commander Dave Bales assumed management of the fire.

As of July 2, crews continued to patrol and mop up around the fire to secure the perimeter. Interior areas of the fire are expected to continue to burn and there may be smoke visible in these areas. The Burned Area Emergency Response team is in place and is continuing assessing burn severity over the entire fire.

All communities affected by the fire were downgraded to “READY evacuation status. However, all areas within the Coconino, Kaibab, and Prescott National Forests remain closed to entry, regardless of evacuation status.

More information about forest closures should be directed to each respective forests.