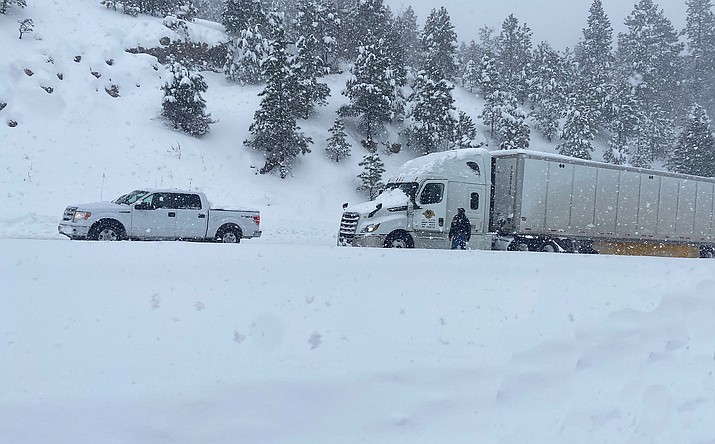 A Williams police officer assists a driver stuck on the eastbound lane of Route 66 in Williams Jan. 26. (Wendy Howell/WGCN)

ARIZONA - Winter weather has closed multiple highways in Arizona’s high country, according to the Arizona Department of Transportation. Portions of Interstate 17, Interstate 40 and State Route 87 are closed with no estimated time to reopen.

Extreme winter conditions have resulted in very difficult driving conditions. Motorists are urged to postpone travel in the high country until the storm has passed. Those who decide to travel in the storm should be prepared for an extended time on the road and use chains or 4-wheel drive. Remember to slow down, leave extra room behind the vehicle ahead of you, and pack an emergency kit containing a fully charged cell phone, warm clothing, blankets, food and water, medications and sand or kitty litter in case you get stuck in the snow.

Plan for extremely long backups on sections of I-40 between Kingman and Flagstaff due to the weather. The following highways are closed due to extreme winter conditions:

▸Interstate 40 is closed eastbound at State Route 89 between mileposts 145-160.

▸State Route 260 between Star Valley and Heber, and from east of Camp Verde to SR 87

▸US 60 in both directions from Globe to Show Low

▸State Route 89A between Sedona and Interstate 17; and from Jerome to Clarkdale