COVID-19 has taken much from Jerrel Singer, but the Native artist looks toward the future with hope
COVID-19: Stealing the life we expected 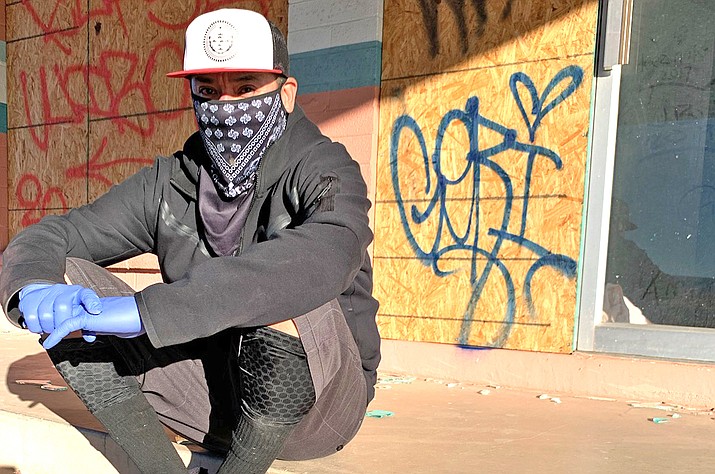 Jerrel Singer in Gray Mountain, Arizona where he was part of the Painted Desert Project. (Photo courtesy of Jerrel Singer)

FLAGSTAFF, Ariz. — It’s been a hard few months for Jerrel Singer — he lost his sister to COVID-19 at the end of October and then in short order his aunt and uncle. By the Christmas holiday, Singer had become sick and was hospitalized himself.

A friend tested positive and urged Singer to get tested. He did and it came back positive. Immediately, his thoughts were of his mother, not himself. Singer lives with his mom and is her caretaker.

“At that time, my mom was still with me and I told her, ‘You have to

stay away because I’m positive,’” Singer said. “My brother came up from Tucson and took my mom down there… away from me, so she wouldn’t get sick.”

His mom tested negative in Tucson.

“I was comforted to know that because I was worried about her,” Singer said. “If I gave it to her, it would so devastating. That would probably have been with me forever. I’m just glad that she didn’t catch it. Hopefully, we can get her the vaccine when she comes back.”

Singer said it took about a week of being in quarantine before his symptoms started getting bad. He lost his sense of taste and he lost his appetite. He tried drinking water but even that got bland. Breathing was hard.

“Just simple tasks, like walking to the kitchen or bathroom, I was breathing so hard. I was coughing,” Singer said. “It was too much for my body to do.”

Some friends brought him an oximeter, which measures the level of oxygen in a person’s blood.

“My blood oxygen levels dipped down to 85 percent and it’s supposed to be at 95 percent,” Singer said. “If it stays that low for a long time, it affects the rest of your organs and possibly the body can shut down, too, and go into shock.” 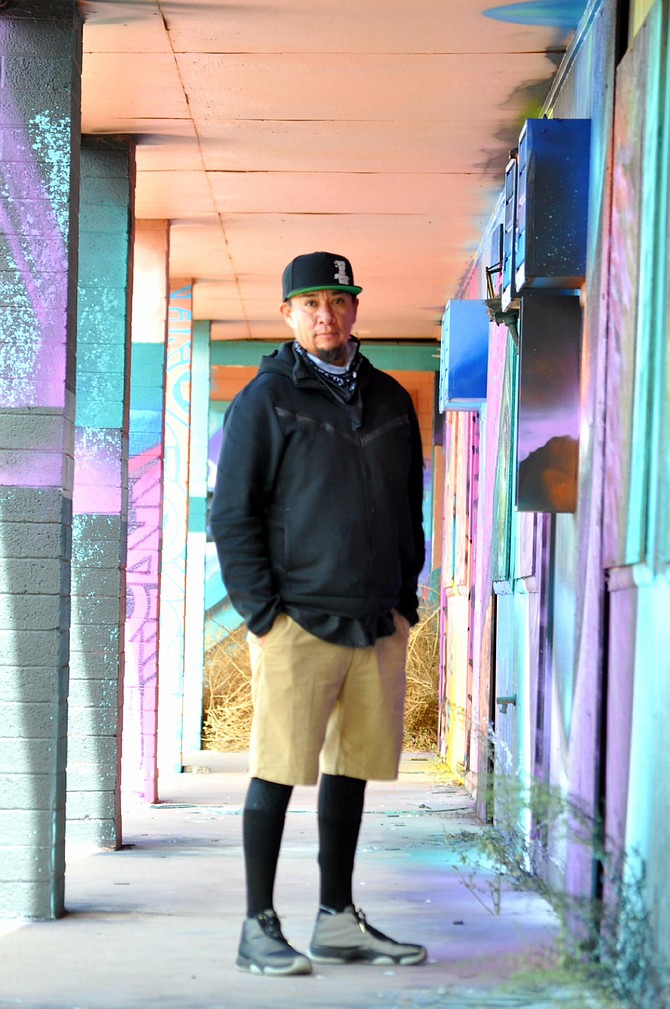 Jerrel Singer is a Navajo artist who continues to recover from the COVID-19 virus. (Photo courtesy of Jerrel Singer)

His friend urged him to go the hospital immediately.

Singer drove himself, with his friend following behind him, to Sacred Peaks Health Center, where even though it was close to quitting time, a doctor was called back in who evaluated Singer and said he needed to go the emergency room at Flagstaff Medical Center immediately.

Singer said FMC was very busy when they checked him in.

“It was really scary because there were people sicker than me,” he said. “People were unsure of themselves, of how they were feeling. They hooked me up to oxygen. My body was still going downhill.”

Singer had read what COVID-19 does to the body, but said he still was not comprehending what was going on with him. Every time he stood up, he was dizzy. It was hard to breathe after only walking a few steps.

He finally got into a room around 10 p.m. and the nurses were flabbergasted when they heard his story.

“They said, ‘Wow. You drove yourself here and you’re still functioning?’ I guess they were kinda shocked that I drove myself and that I was still doing things for myself,” Singer said.

They attached leads and IVs to his body, which he did not enjoy, and started giving him fluids because he was dehydrated.

His condition worsened. He lay on his side and tried to breathe.

“I’ve never been a guest at the hospital,” Singer said. “It was a new experience. Everything was zipped closed. Everywhere I looked, it was pretty much secured. It turned into a COVID hospital where they’re dealing with patients like me left and right.”

Singer said the haze and daze continued. The staff gave him steroids and other medications, which he doesn’t remember. He tried to breathe. He said being a diabetic was a concern.

Singer is a vegetarian, which he uses to control his diabetes and keep his blood sugar down. He has cut out sugar completely and carefully looks at food content. He runs to stay healthy.

Now, he said, he has to rebuild his lungs.

“Even with walking around or a flight of stairs, I get winded,” Singer said. “It’s different.”

Singer was moved to a room upstairs where the nurses continued to worry about him because he was not eating.

“Every time I got up I was coughing and just winded,” Singer said.

After a few days, he did start to feel better and was able to eat a little.

“I learned how to watch TV again because that’s all there was to do,” Singer said. “I had friends who delivered drawing pads and pencils because they wanted me to keep drawing and keep my mind occupied. That was hard to do because I couldn’t really get comfortable and get my mind to draw. I would try to do it every day.”

As he started to feel better and was moving around more, Singer tried experimenting with taking off his oxygen. But every time, his oxygen level would drop.

“They’d come running in to check me,” Singer said. "I was still on oxygen for my whole entire stay. They were worried about me because it wouldn’t go back up. They said, ‘You’re going to be on oxygen for awhile.’”

He said the nurses were great, but he wanted to make sure the cleaning crew got some credit too.

“The clean-up crew, they do a great job of cleaning up everything and sterilizing the room,” Singer said. “They were so helpful. I know the nurses get praise, but the cleaning crew deserves praise too.”

In all, Singer was in the hospital for six days, through the Christmas holiday. One of his friends brought him a little Christmas tree for his room.

“That made me feel happy,” Singer said. “My daughter kept calling me and I Facetimed with her. She kept showing me all our pets… making sure dad was ok.”

Singer was flooded with phone calls, texts and messages of concern during his weeklong stay at the hospital.

And some people wanted to make sure Singer would paint again, too, not just for himself but because of what art makes people feel.

When he got out of the hospital, he was still having problems breathing. He still felt woozy and was coughing, and was on oxygen for about a week after he was released. His friends and family dropped off food.

“Now, I can cook for myself. I can walk more, like half a mile, to help me rebuild my lungs. I can take the dogs out. I can clean up more,” Singer said. “Before, it was just a struggle. I’m grateful for that. I’m grateful I still have my life, compared to reading, especially on the reservations, where there’s been a lot of COVID deaths.”

Singer said, on the reservation the people don’t have the care that a lot of other people can get.

“It’s heartbreaking, even the younger people,” Singer said. “It’s difficult to read and hear about that — lots of friends and lots of family.”

Singer loses sister, aunt and uncle to COVID-19 in the space of three weeks

Singer’s sister passed away right after Halloween. He messaged her, checking on her, because she had just been released from the hospital. She usually messaged him back many times a day.

“My mom called me and said she passed away,” Singer said, adding it took from the beginning of November until after Thanksgiving before the family was able to lay his sister to rest because of COVID.

During that time, Singer’s aunt and uncle were calling to check on him.

“They helped. They took care of my sister, too, when she was younger. She was the oldest,” Singer said. “They grew up with her. They adored her because she was the first born. My aunt kept calling me telling me she cared. She loved me. She loved my sister. And I said, ‘You know I love you too.”

“He passed away first, and then she passed away after that,” Singer said. “Losing three people I was really close to all within a span of three weeks, that was difficult.”

Singer said COVID-19 is not a hoax and counters the people who say it is fake or not real.

He acknowledges that it is hard to be safe because it’s hard to know who is sick and who is not sick wherever he goes.

Singer said it’s been an emotional time but he tries not to show it.

“I try to be strong for my family. I try to be somebody they can talk to and I see that it hurts, but still you have to go on and continue living, continuing caring for people,” Singer said. “Try to be helpful. Try to be a resource saying, ‘Hey, please don’t do this. Please don’t do that. Be careful. Take care of one another. I wish I could come visit, but it’s a risk. It’s risky. I care for you. I miss you. I want to hug you.’ You miss that family dynamic of my nephews and my nieces. And my brother.”

Singer said being Native, it means you want to help out, but right now, no one can.

“You can enjoy life, but you have to do it at a distance now,” he said.

Singer said he is glad that people kept pushing him to get back to painting.

“It’s almost like learning how to do it again,” he said. “There hasn’t really been an art show since February of last year. It’s hard to display work. People want to buy something where they can see it, actually touch the painting and see it natural light.”

But he has been a part of the Painted Desert Project in Gray Mountain, Arizona.

“I was grateful to help out with the mural in Gray Mountain,” Singer said. “It felt good to actually create something and be part of that with those guys and hanging out and seeing the dynamic of doing live art. It was almost like a live art show.”

It mimics learning to paint again.

“You put your first lines on and you say, ‘Eww.’ But it takes time. It takes awhile for the colors and everything to come through,” Singer said. “You want to create something beautiful that everyone can enjoy but those first few lines — it doesn’t look and feel right.”

Singer said, painting and healing are similar right now — as with everything having to do with COVID right now.