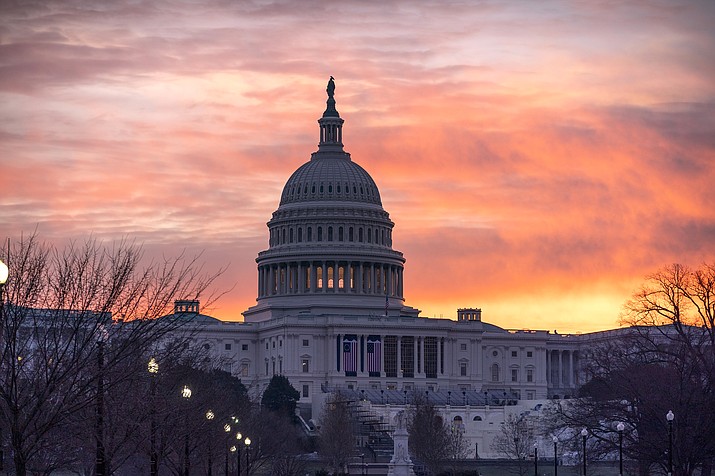 Dawn breaks at the Capitol in Washington Jan. 11. On Jan. 6, the U.S. Capitol building was overrun by rioters during a Save America Rally. (AP Photo/J. Scott Applewhite)

FLAGSTAFF, Ariz. — U.S. Democratic Rep. Tom O'Halleran, (CD-1), who represents many rural areas of northern and eastern Arizona, including the Navajo and Hopi reservations, witnessed the recent riot in the nation's Capitol Jan. 6 and said it was terrifying.

O'Halleran was waiting to give a speech on the House floor regarding the Republican parties challenge to the electoral college victory of President-elect Joe Biden when he said they started hearing noise.

"The process was going along, but we started hearing more and more noise. We were informed that there were rioters down the hall. It was not far from our meeting chambers," he said. "We heard gunshots and there was tear gas in Statuary Hall to keep people from going further. The officers were locking down the chamber. This all happened in about 20 minutes."

“This was an attack on our government and all concerned. We knew that lives were taken. It was a terrible experience. Violence is just not the way America should be." ~Tom O'Halleran, AZ State Rep. (CD-1)

O'Halleran, a retired police officer, said there were not enough officers to protect the people.

"There was a lot of anxiety for the (congressional) members," he said.

O'Halleran noted that several members of Congress are former police officers or veterans. He said those members, like himself, used their experience to keep others calm.

"People were pushing against the Chamber's doors. We were told to get on the floor. Some of the doors were breached as we were leaving the floor," he said.

O'Halleran said the doorway to the Speaker's Lounge was barricaded with couches. He said officers were getting beaten up and pushed up against doors. Once Congressional members were taken to the tunnel below the building for safety, they were told that rioters were right behind them.

"And they were because we could hear them," O’Halleran said.

Eventually more Capitol police arrived to help and everything was secured.

"Once everything was cleared up, there was nobody who said we shouldn't go back. We knew we had to go back and we were going to move forward," O’Halleran said about continuing the certification of the Electoral College vote.

As a former police officer and government official, O'Halleran has seen riots and peaceful marches.

"This was an attack on our government and all concerned," he said. "We knew that lives were taken. It was a terrible experience. Violence is just not the way America should be."

O'Halleran said peaceful demonstrations are part of American society, but the violence at this gathering was planned.

"Why would people bring guns and shoot them?" he asked. "Why would they put bombs around the neighborhood? It was well planned out. Now, Congress is working on a policy on how people can communicate so this doesn't happen again."

"Their building was sparsely protected in trying conditions," he said. "They were told to hunker down and stay away from windows. They were not as well protected as they should have been.”

As a former police officer, O'Halleran said he felt it was his job to keep others calm. Another Arizona Democratic Rep. Reuben Gallego (CD-7) showed other members how to use gas masks because of the tear gas.

"There was no sense of panic, but once you heard gunshots you knew people's anxiety went up," O’Hallersan said.

O'Halleran said he feels strongly that President Donald Trump should be impeached for inciting the violence and for not being stable.

Although Trump only has a few days left in office, O'Halleran said there is never a time when somebody unstable should be in charge of the most powerful country in the world with all the assets that the country has.

O'Halleran said he hasn't seen a president come out with the words that Trump has used.

"Trump said the election was stolen and it wasn't," he said.

O'Halleran pointed out that judges from both parties in 60 cases have continually rejected Trump's legal challenges to the election. The Supreme Court, with three of the nine members appointed by Trump, refused to hear the case because there was no evidence. 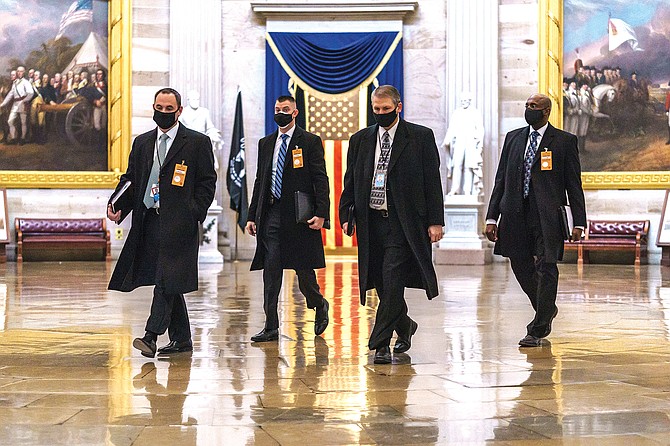 The police chief of the Capitol and the Sergeant of Arms in both the House and Senate were fired for not providing enough security during the electoral college certification.

O'Halleran said the case shows that the American people can have faith in the judicial system.

"We do not want to be seen as a country that fights with each other. We can disagree but we need to be united as people," he said.

O'Halleran said the lesson to be learned is that the government should not be used to promote lies and accusations.

"This has been building because the (Trump) administration has consistently lied to the American people," he said. "The members of his own party see it."

O'Halleran said he cannot remember another time when a president told people whatever he wanted to tell them without any basis in fact or where the information came from. He said part of the problem is social media that has no requirement for content standards and political cable TV shows that have political agendas to rile people up.

"We need a sense of respect and honesty," he said.

O'Halleran said the upcoming inauguration will have much more security because of the Jan. 6 event.

"But we are never going to be stopped by people who threaten us," he said.

O'Halleran said because of the COVID-19 pandemic, there won't be as many events as usual during the inauguration.

O'Halleran said he was elected to find ways to work with people, not to make enemies. He urges people to stay involved in their government.

"We want to make sure we hear from you on your concerns. It should not be a top down government. It should be the other way. We need to be peacefully involved. Every American has the right to voice their opinion, but not the right to be violent while doing that," he said.