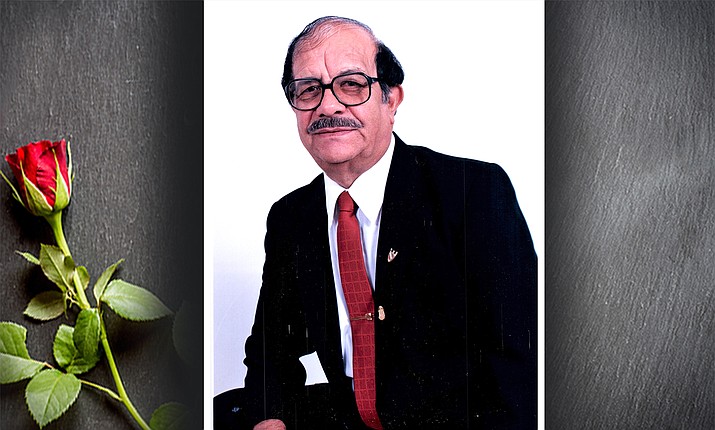 He was one of five children born to the late Concepcion and Marie Carrillo in Williams, Arizona where he lived until entering the U.S. Army just before the Korean War.

If you knew Frank, you knew his commitment to family, friends, community, and country. He was a caring provider, talented musician, combat veteran and civil rights leader.

After enlisting in the Army in 1948 and completing basic training, he was accepted into the 24th Infantry Division Band. While stationed in Japan, the musicians were mobilized to Korea where he spent 16 months in combat operations that took him all the way to the Chinese border and back to Seoul. Frank earned the Bronze Star Medal as well as the Korean Service Medal with five Bronze Service Stars (for five significant combat campaigns).

After his service, Frank and Rosalie built their home in Williams and continued their education to become teachers. Frank earned his BS in Secondary Education, then a Master’s Degree in Counseling and Guidance with a minor in Social Studies and Music.

While working and living in Tempe, Arizona, he also earned his State Certifications in High School Administration and High School Psychology. He has influenced the lives of many students who remember him fondly.

Frank had tremendous positive impact on his community.

As a leader in the League of Latin American Citizens (LULAC) and as an appointee by Gov. Bruce Babbitt to the Arizona Civil Rights Board, he was an effective advocate for minority rights and reform. During his 46+ years of service in LULAC, he served as National LULAC Vice President for the Far West, Arizona State Director (six times) and many other positions. His work directly resulted in opening the doors for hiring Hispanic teachers in the Tempe Union High School District, providing scholarships for needy students, obtaining grants and affecting curriculum changes for minority high school districts to increase graduates’ job prospects, and broadening hiring practices at FedEx.

He worked tirelessly for the Simpson-Mazzoli Committee which led to the signing of the 1986 Immigration Reform Act by President Ronald Reagan.

In 1979, Frank’s name was added to the Wall of Tolerance in Montgomery, Alabama, “..to provide inspiration to all those who choose to take a stand against hatred…”

In 2006, he was honored with the Valle Del Sol Profiles of Success Hispanic Leadership Latino Advocacy Award.

In 2017, LULAC presented him with the “Public Service Recognition Award” and in 2018 with the “Lifetime Service Award.” Frank was very active and served as President of the Tempe LULAC Council #361 for many years until his passing. The affection shown to Frank by his friends, peers and community was appreciated and a source of great comfort to him throughout his life.

Resolutely independent and engaging through his final years, he has been an inspiration to his family and will be dearly missed.

Visitation will take place Wednesday, Jan. 13. Due to limited seating restrictions, attendance is by invitation only.

Frank's passion was helping needy youth better themselves. In lieu of flowers, the family asks that tax deductible donations for a scholarship fund in Frank's memory be made out and mailed to LULAC Council 361, c/o 1932 E. Lamar Road, Phoenix, AZ 85016. Online donations can be made via Zelle to TempeCouncil361@gmail.com.