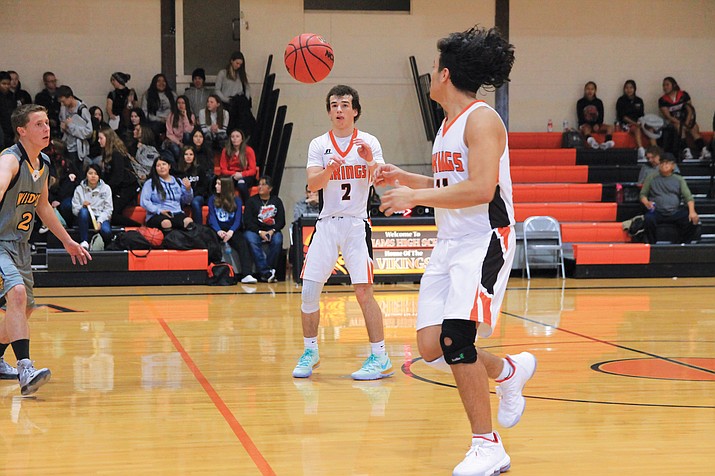 Some believe a re-vote is possible.

The decision to cancel the season was in response to the alarming rise in coronavirus cases and hospitalizations in the state, according to an AIA news release.

Following a big backlash from coaches, parents and athletic directors from Arizona high school basketball, soccer and wrestling communities, districts are scrambling to come up with alternatives if the AIA sticks with their decision.

The AIA decision affects boys and girls basketball at Williams High School, where the school competes with other 1A Conference schools.

The Williams Unified School District Governing Board plans to discuss the decision at its Jan. 13 scheduled meeting.

‘We’re going to continue practicing with our kids until there’s a final decision made,” said WUSD Athletic Director Phillip Echeverria. “I believe that within our town our kids are safer at school participating in the programs we are providing than they are going out and participating in club sports.”

Echeverria said the district may look at options for competing outside the AIA umbrella.

A petition was created by Phoenix North Canyon basketball player Brandon Jackson on the afternoon of Jan. 8 in hopes of convincing the AIA Executive Board to overturn its decision. The petition has garnered over 45,000 signatures.

Several high schools have discussed moving the winter athletics program to the spring. However, this can be difficult for smaller schools.

“We are not big enough to overlap winter and spring sports, the majority of our kids play both,” Echeverria said. “I would hate to put pressure on our kids to make a choice whether they are going to play basketball or go out and play baseball/softball. That’s unfair to them.”

At Flagstaff High School, Principal Tony Cullen announced a special winter athletics meeting to gather input about other options for basketball and wrestling.

“We will be exploring with other members of the 4A Conference options to run basketball and wrestling during the spring season,” he said.

The original recommendation to cancel winter sports was made by Sports Medicine Advisory Committee (SMAC) and was presented to the AIA Executive Board Jan. 7.

The news release stated that SMAC based its recommendation on the fact that 93 percent of all intensive care unit (ICU) beds and 92 percent of all inpatient beds are in use, leaving concern that injured students may be unable to receive needed care because of a lack of beds or available medical professionals.

“Unfortunately, it is expected that the state will see a continued rise in COVID-19 hospitalizations for some time. As medical professionals, we cannot in good conscience recommend that students engage in a winter season under the current conditions,” SMAC’s committee chair, Kristina Wilson, stated in the news release.

“While we understand the board’s position, we are saddened by this decision, especially considering that club sports are continuing. To the best of our knowledge, never in our 100-plus-year history has the AIA canceled an entire season,” Hines stated. “We want nothing more than for our students to be active in school and participating in interscholastic sports and activities.”

On Dec. 18, the AIA voted to delay the start of winter sports until Jan. 18, with school teams being able to practice for 14 days prior to the start of competition after returning from winter breaks. The regular season would have then wrapped up on March 5.

“‘Sad’ is probably the best word,” Prescott Athletic Director Missy Townsend said when asked how she felt about the AIA’s decision. “These kids are just devastated and my heart just hurts for them and I am sad for my coaches who are sad. It’s just frustrating I guess.”

Townsend added that she felt confident that winter sports could have been carried out at Prescott provided they’d continue to follow the COVID-19 protocols. According to her, no outbreaks or scares occurred during the fall sports season.

Philip Reid, head coach for the Prescott boys soccer team, was understanding of the AIA’s decision but he is still saddened that his players won’t be able to compete this year.

The Arizona Interscholastic Association can be contacted at AIA.org.

Aaron Valdez of the Prescott Daily Courier contributed to this story.