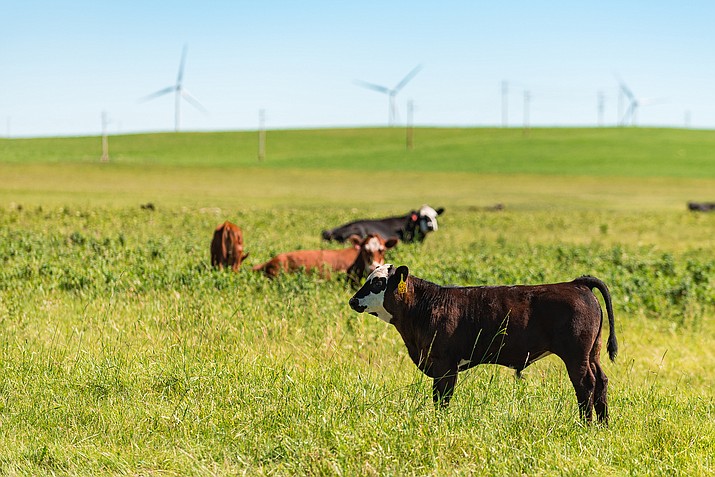 WILLIAMS, Ariz. — Babbitt Ranches is taking another step in its quest to join the wind energy race as it moves forward with its latest project — a wind farm 30 miles northwest of Flagstaff.

The ranch has partnered with NextEra Energy Resources — the same company who dotted the landscape north of Williams at Perrin Ranch with 62 turbines on 20,000 acres in 2012 — and has plans to bring 61 turbines to 42,670 acres just east of Valle.

The wind turbines will be 614 feet high, from ground to blade tip, twice the height of the 298-foot-tall turbines at Perrin Ranch.

NextEra sent out notices to nearby residents Feb. 10 to advise them of a virtual public meeting that will take place at 5:30 p.m. Feb. 24 to answer questions and provide information about the company and the project.

The closest neighbors are to the west at South Rim Ranches subdivision.

Following the meeting, Babbitt Ranch Energy Center, LLC, a subsidiary of NextEra, will be applying for a Conditional Use Permit from Coconino County for a 160-megawatt wind and solar energy center on the Babbitt Ranch.

In addition to the 61 wind turbines, the wind farm will have 400-600 acres of solar panels, a collector substation, and a switching station, to connect the project’s generated electricity with the existing Moenkopi to Cedar Mountain transmission line operated by APS.

The project will also include a battery storage facility, a 500-foot-long generation-tie line, underground electrical collection lines, access roads, a parking area and a maintenance and operation building.

The 42,670 acres are a checkboard of parcels that include private land and Arizona State Trust Land.

The actual wind and solar facility disturbance footprint is estimated to be 1,000 acres, or 2.3 percent of the project area, according to project developer Wardah Abbasi.

Although there was considerable local opposition to the Perrin Ranch wind farm, NextEra promotes the Babbitt Ranch project as beneficial to the State of Arizona’s economic growth and energy goals.

“A landowner can potentially earn more per acre for hosting a wind turbine than any crop or ranching activity,” NextEra states on its website.

Although NextEra estimates construction of the wind turbines will bring 250 jobs, only four will be full-time once the facility becomes operational.

If approved, the wind farm project is scheduled to begin operations by the end of 2022.

In November 2020, Pattern Renewables Development Company received a Conditional Use Permit from Coconino County to allow the construction and operation of six meteorological monitoring towers (MET towers) on two parcels of the Babbitt Ranches located 25 miles west of Valle.

MET towers are typically used to observe and record meteorological conditions on a site prior to an electrical generation project.

NextEra most recently erected a utility-scale wind farm near White Hills, 40 miles north of Kingman. The 126-turbine, 350-megawatt wind farm is on 24,000 of public land administered by the Bureau of Land Management.

Anyone interested in participating in the Babbitt Ranches Wind project meeting on Feb. 24 can join online from 5:30-7 p.m. at themediaframe.com/links/babbittranch, fill out the contact information and click on the “join webcast” link, or join by phone at (877) 879-1183 and enter access code: 1660021.