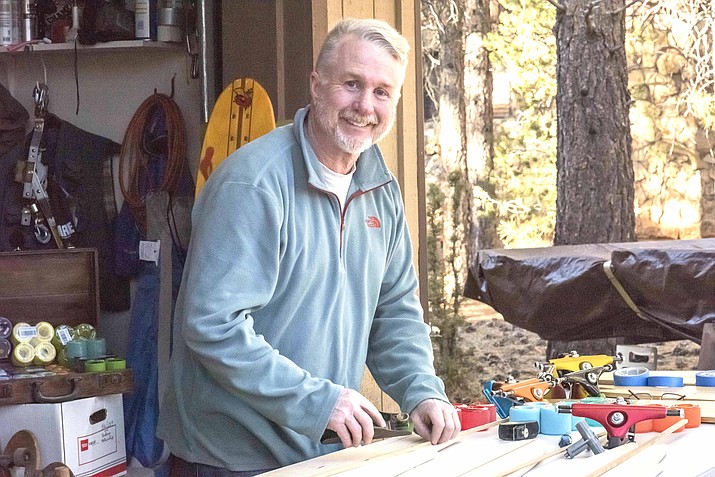 Grand Canyon Village resident Scott Rommel recently started his company, Soledaddy Longboards, where he makes custom longboards. The boards can be viewed and purchased on his website or at Aspen Sports in Flagstaff, Arizona. (V. Ronnie Tierney/WGCN)

GRAND CANYON, Ariz. — The pandemic of 2020 may have put a halt to a lot of businesses, but for Scott Rommel it got him rolling right into his dream — making longboards.

Rommel’s tag line, “Everybody wants one” is quickly proving to be true.

“When COVID hit, I went to San Diego to help my parents,” said Rommel, who works full-time for the water utilities division at Grand Canyon National Park. “We were cleaning the garage and my son, Everett and I found some skate board planks that were lying around from when I used to make them. Everett suggested I make a few. So I did.”

That spurt of discovery led to a buried ambition from Rommel’s youthful days growing up in San Diego, California.

“I’ve been skateboarding since the 70s when I was a kid around six years old,” Rommel said. “My dad was a carpenter and worked for a yacht manufacturer. He also had woodshop in our backyard and he made me my first skateboard from scraps he would bring home.”

It wasn’t long before Rommel stated making his own longboards and selling them to San Diego skate shops and at the San Diego Sports Arena Swap Meet.

“I needed to make more money so I started working as a finish carpenter installing custom cabinetry,” he said.

Now, more than 20 years later, Rommel is completing his dream — manufacturing his longboards once again. But this time on a larger scale through his company Soledaddy Longboards.

Made out of Birch laminate, longboards are traditionally longer and a bit wider than a skateboard, making it easier to keep balanced — especially for beginners.

“Birch laminate is known for both its flexibility and strength,” Rommel said. “It (birch laminate) flexes better and is stronger than mass-produced skateboards which are made of maple.” 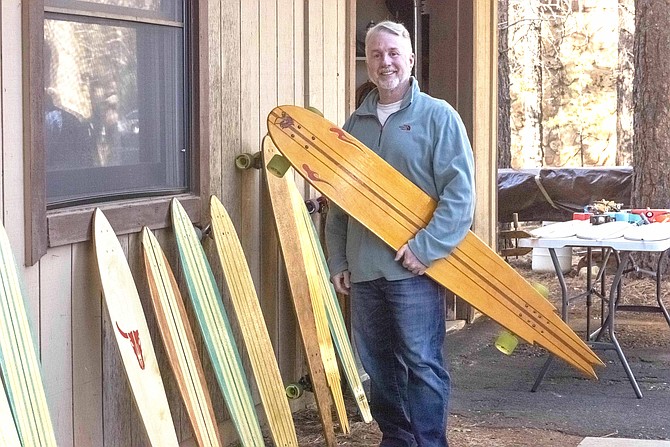 Rommel said he has found a good source in Flagstaff for Birch laminate.

“I think what really distinguishes my longboards is the look, style and shape,” he said.

“It’s not just a skateboard, it’s a piece of art,” she said. “I see it as an investment in art. My daughter is a beginner skateboarder and she has taken to the sport very well. It rolls beautifully.”

Along with selling his longboards online, Rommel also sells them locally at Aspen Sports in Flagstaff.

“Scott brought one of his long boards in just before COVID,” said Aspen Sports Skateboarding Manager Jorge Doniz. “As a skate boarder for over 15 years, I gave his board a shot and really liked it.”

Doniz said the boards sell well and said anytime someone picks up one of his boards, he enjoys telling them Rommel’s story.

“Rommel is also collaborating with other local artists in creating the artwork for the boards,” Doniz said.

The name Soledaddy was derived from Mt. Soledad in California, which is known for great skateboarding.

Working out of his home at the South Rim, Rommel has turned his garage into a studio, stocked full of all the necessary parts for his longboards.

“The feel of a Soledaddy is similar to the suspension on a luxury car,” Rommel said. “They are able to accommodate cracks in the sidewalk or pavement and the occasional pebble. These boards ride smooth, like a Cadillac.”

Rommel said the differences between skateboards and longboards is length.

“Longboards are longer than 35 inches and they are flat without a kick tail like skateboards,” he said.

Some of Rommel’s boards measure as long as 60 inches.

Rommel’s wife, Lori said she is happy to see her husband doing something he loves, while providing others with a quality piece of work.

“He’s so diligent in every aspect of his work,” she said. “Starting from the original design, cutting and sanding, and painting all the way to the last coat of varnish. He takes his time to make sure the board is perfect in every way.”

Ten-year-old Henry Burnette, who has two Soledaddy Longboards, said the boards are “great.”

“I don’t crash like I did on my other skateboards,” he said.

At home in the Canyon

Prior to moving to the Grand Canyon to work for the park service, Rommel visited twice a year for backpacking, fly-fishing and photography. He met his wife in 2003 on the Clear Creek Trail. They married soon after and made Grand Canyon Village their home in 2005.

More information about Soledaddy Longboards is available at www.soledaddylongboards.com or (928) 640-0607.