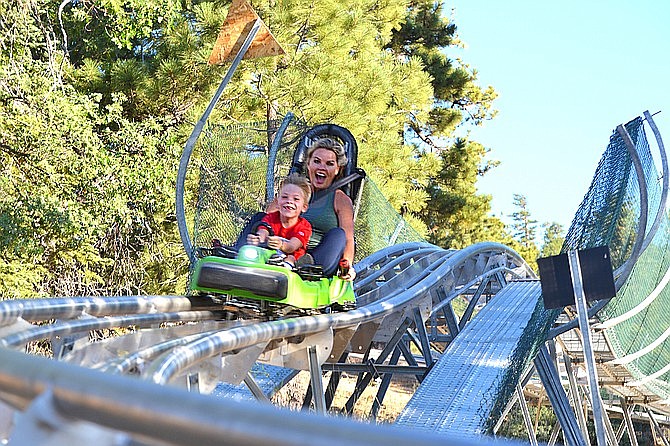 Community members were given a final chance to address the council, before the councilmembers responded to their concerns and voted on the rezoning of 13 acres of the 20-acre property.

Canyon Coaster Park is a proposed family adventure park with the primary attractions of a coaster track, and a summer and winter tubing hill operation.

The property is located on the east side of Williams between Route 66 and Pine Street.

The majority of those who spoke at the three public hearings were residents of Pine Street who were mainly concerned with noise, lighting and parking impacts. Several others in attendance gave support to the project.

The council allocated the time necessary to hear from those for and against the project, with nearly a dozen lined up to speak in the hour and a half meeting.

Jace Zack was one of the first to speak and urged the council to consider doing an impact study to analyze the effects of the business on the residents and community.

“There’s going to be a 35-foot drop at one point on that coaster,” he said. “It’s likely it will included screaming and it will be audible on Pine Street.”

Zack said minimizing the impacts on residents should fall on the developers, not the residents.

“The burden should be on them, not on us,” he said. “They should make the adjustments of complying with their own promises. We have nothing but their word.”

Pine Street resident John Zanotti said he was concerned with the location of the business and that a professional analysis hadn’t been complete.

“We have a police chief, with all due respect, who gave us our traffic report, not a traffic engineer,” Zanotti said. “We had a gentleman from the water department who hauls water and doesn’t do water management or drought management. We have nobody who has the credentials to say that this is going to work.”

Williams Community Development Director Tim Pettit addressed the issue of impact studies and compliance with city codes, reminding people of the qualifications of the staff involved.

“I feel like some of the people don’t understand,” he said. “We do have traffic impact reports, we have street studies.”

Pettit said anyone submitting a request for rezoning has a 30-40 question checklist of requirements to be met.

Pettit said the city of Williams also has lighting ordinances which developers must comply with.

“The city of Williams has codes,” he said. “We are a Dark Sky community. They will comply with that and it will be taken care of in the construction documents.”

Pettit went on to remind people that construction documents are professionally drawn up by engineers and studies are complete.

Councilman Mike Cowen added that the city has the qualified staff.

“When somebody says our water guy is here without credentials…he has plenty of credentials,” Cowen said. “He runs our water and our sewage treatment plants.”

Greg Cole, owner of South Rims Wine and Beer Garden, said he is in support of the proposed business.

“With this coming in, with this development, I can actually keep my employees (through the winter) and they will not have to look for another job,” he said. “Laying off people in January and February is really tough, and then (it’s difficult) trying to get those employees back.”

Vice-mayor Don Dent wanted to remind people that there are many in the community who are in support of the new business.

Dent said there are many who want to see more jobs come to Williams.

“They know the sales tax created by this helps to pay our bills,” he said.

Both Dent and Councilman Frank McNelly spoke about living in Williams prior to the return of Grand Canyon Railway and the establishment of Bearizona.

“There was opposition to each of those,” Dent said. “There are some people who don’t want anything to change, but if we aren’t growing, we are dying, we are shrinking.”

McNelly said he remembers the slump the town was in after the I-40 bypass in the 1980s.

“I saw when the town was in shambles back in the 80s,” he said. “I remember, and things have changed, things have gotten better and Williams is doing better.”

McNelly said even with that knowledge, it has been difficult to come to a decision about the project.

“I want people to understand that I have personally agonized about this and I’m sure everyone on this council has agonized and the staff as well, because we live here too and we know the people,” he said.

Councilman Lee Payne added that despite the passing of the rezoning, there is still work to be done on the development plan.

“We have asked the questions and we do have you in mind,” he said.