Grand Canyon history: Death along the Colorado River in 1922 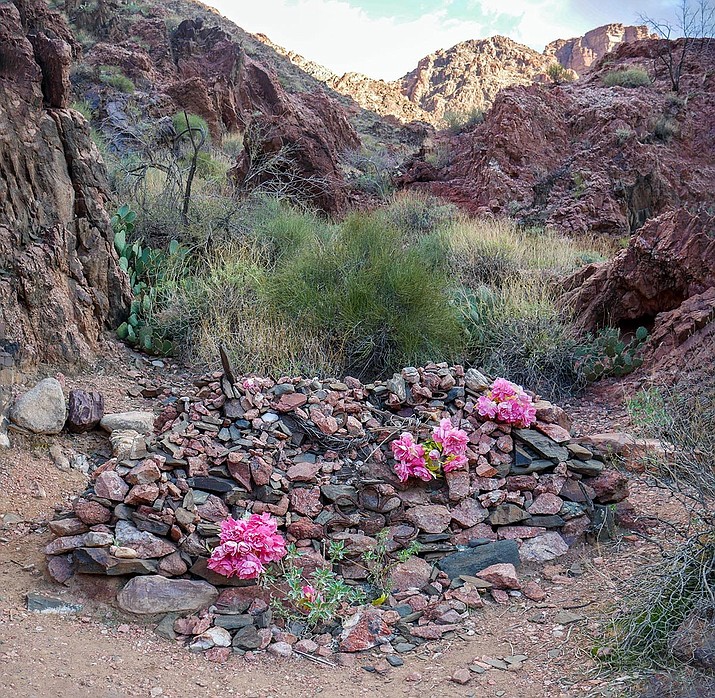 The gravesite of Kaibab Trail Foreman Rees B. Griffiths is located on the north side of the Colorado River, between the Black Bridge and the mouth of Bright Angel Canyon. Griffiths died on Feb. 6, 1922 during a blasting accident. (Photo/NPS)

GRAND CANYON, Ariz. — On the north side of the Colorado River, between the Black Bridge and the mouth of Bright Angel Canyon, the gravesite of Rees Griffiths can be found by hikers, and many wonder of his story.

On Feb 6, 1922, during construction of the Kaibab Trail, trail foreman Rees B. Griffiths was inspecting a blast excavation when he was killed from injuries he received when a large boulder, loosened by the blast, came tumbling down the slope.

“In accordance with instructions, accompanied by nurse Catti from El Tovar, I left headquarters about 6:30 p.m. bound for Camp Roosevelt, to be of such assistance as possible to Rees Griffith, who had been injured by a falling rock.” 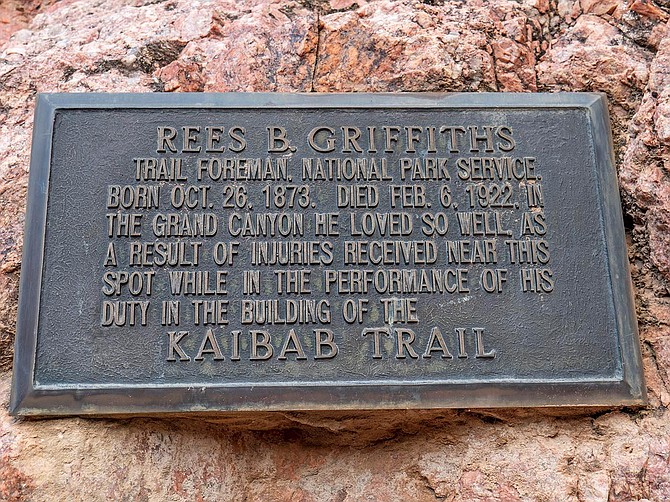 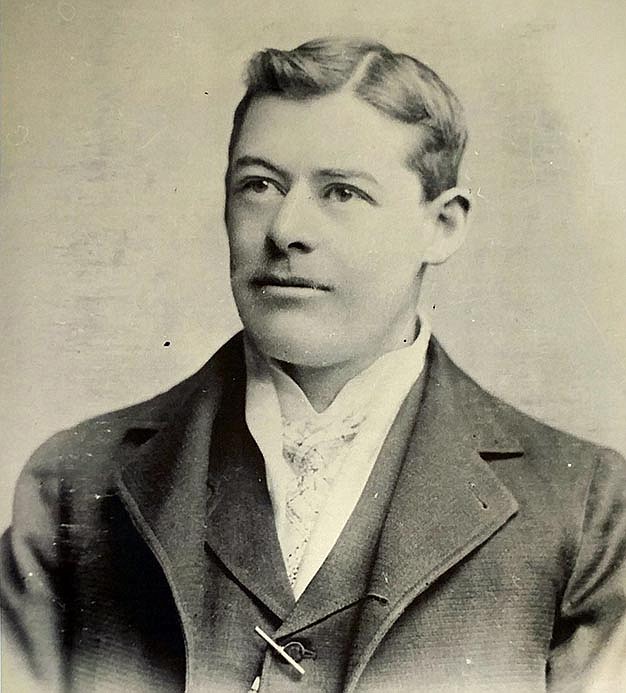 Smith said the night was not very cold, but rather balmy and the descent into the Canyon was made as quickly as possible, the factor of safety being considered.

“Had we been engaged in any other errand the mystical beauty of the Canyon, bathed in ethereal moonlight, would have been greatly enjoyed,” he said.

The group reached the packers’ camp at Pipe Creek at 9 p.m. and found hot coffee prepared for them.

“Miss Catti borrowed a pair of chaps there from one of the boys, as the wind had come up and it was much colder. We were warned to proceed slowly over the remainder of the trail on account of packed ice in the trail,” he said. “We covered Tonto Trail in good time, but below the 1,500 ft. level on down was very dangerous. The tread of the trail was icy and in pitch darkness, the moonlight not reaching there. However, we reached the bottom without mishap. Miss Catti never uttered a word of complaint or fear, but urged me to go as fast as I considered safe.”

When the group reached Kaibab Suspension Bridge, a ranger was waiting to take their mules. They walked across the bridge and found other mules there.

“We arrived at Camp Roosevelt a few minutes after eleven and went immediately to where Rees had been carried,” he said. “Examination showed that he had been dead probably fifteen minutes. He had been unconscious since 9:30. Two fellow-Mormons sat with the body the rest of the night.”

When morning came, arrangements were made with park rangers West and Peck to pack the body out of the Canyon if it should be so ordered. The group ha plans to mount a platform on a mule’s back and lash the body in place to pack out. However, they all felt that it would be much better to bury him in the Canyon near the place where he lost his life.

“After conferring with the superintendent by telephone, Miss Catti, landscape engineer Ferris, rangers West, Peck, and myself selected a spot considered proper from the point of landscape engineering, high water, surface wash, and proximity to the trail,” Smith said. “This place is about five hundred yards west of the bridge in an alcove in the Archaean Rock which forms the Canyon wall. We dug a grave there.”


The carpenter made a coffin from materials at hand, and the group lined it with sheets sent down by Smith’s wife for that purpose. She also sent a Prayer Book and a Bible with ranger Winess, who accompanied the coroner to the scene of the accident. An impaneled jury of six declared the death to be due to unavoidable accident.

“After the inquest the coroner turned the personal effects of Rees over to me,” Smith said. “They consisted of a gold watch and $290 in a money belt. I hold these subject to instructions from the widow.”

The body was prepared for burial by wrapping it in white according to Mormon custom. The coffin was carried to the grave, and, while the small company stood uncovered, Smith said a few words.

“It was right that this man should be laid to rest near the spot where he fell and where he had spent a great part of his life; that it was fitting and proper that we who had known him, worked with him, and loved him should perform this last duty,” he said. “Then the services for the burial of the dead were read, and we left him there beside the trail he built.”

Read more historical articles online, including the “Building the Kaibab Trail” at www.nps.gov/articles/1925kaibab.