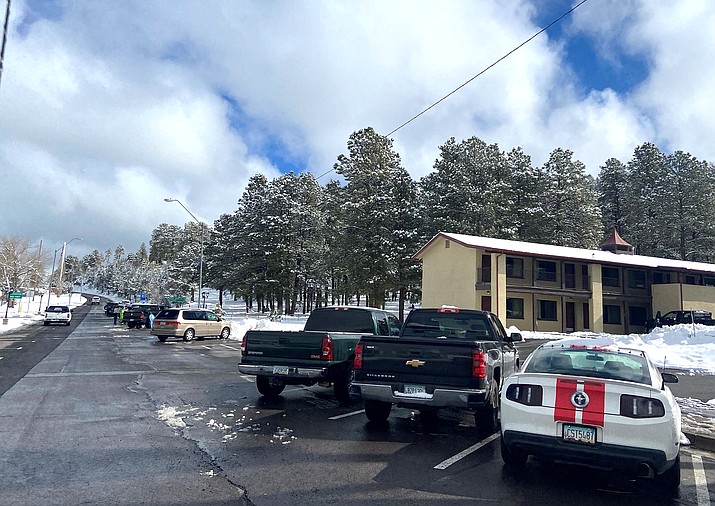 A 20-acre lot on Route 66 is targeted for an adventure park. (Wendy Howell/WGCN)

WILLIAMS, Ariz. — The Williams City Council conducted a second reading, Jan. 28, of an ordinance to rezone 13 acres in downtown Williams for a proposed adventure park, while several councilmembers also reported on an information gathering trip made to a similar facility.

Canyon Coaster Park is a proposed family adventure park with the primary attractions of a coaster track, and a summer and winter tubing hill operation.

The Williams Planning and Zoning Commission approved the rezoning of 13 acres of a 20 acre parcel on the east side of Williams at 700 E. Route 66, Dec. 17. The project then moved before the Williams City Council for a first reading, Jan. 14. The ordinance must be read three times before it can be approved. 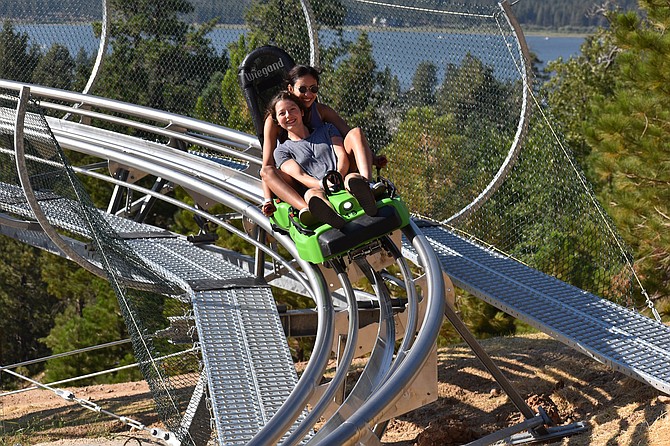 Councilmembers Frank McNelly and Lee Payne, and Williams Community Development Director Tim Pettit reported on their scouting trip to Mineshaft Coaster and the Alpine Slide at Big Bear Lake, California. The parks are owned and operated by Scott Towsley, who is a co-applicant for the proposed Canyon Coaster Park in Williams.

Several residents and others with an interest in the project were also given a chance to speak.

McNelly said the group spent two days at Big Bear Lake where they observed a coaster ride and snow tubing operation that is similar to what is proposed for Williams. He said they observed the general ambience of the parks and looked closely at the lighting, noise and traffic.

“I’m going to try be open minded and objective in what I say, but also relay what I saw,” McNelly said to those in attendance.

McNelly said the group initially observed the coaster ride and analyzed the noise of the carts, track and riders. He said the coaster track was generally very quiet.

“You could literally not hear it, you could just see the shadow go by,” he said. “And the cable that pulled you up, there was no clicking, there was literally no noise.”

He said there were a few people making noise while riding down, but nothing unusual. He said most of the sounds they heard came from the nearby roadway.

Later the group visited the park in the evening to observe the lighting. He said the overall park lighting was moderate with small lights on the coaster cars.

Payne said the group also toured the snow tubing area, where he was given an opportunity to ride the “magic carpet” to the top of the run.

He said the carpet transport made little noise, with most of the sound coming from riders descending the hill.

“The highway noise way overshadowed the sound of the park,” he said. “The park didn’t seem like a big loud orchestrated thing. You could hear some people enjoying the ride, but it wasn’t very loud.”

He said the parks were also clean, without any garbage seen.

The councilmembers asked operators to run the snowmaking equipment to observe the noise from the machines. They walked to several locations around the facility to analyze the output.

“At 50 yards away, you could hear the machine, but when you went inside the building it was half as loud, if even that,” McNelly said.

McNelly said the operators stated that snowmaking can only occur when temperatures are below 25 degrees. They also said they estimate 250 hours of snowmaking needed per year.

“If you divide 250 by eight hours a day, that’s about 30 days of snowmaking,” McNelly said.

The group also analyzed the parking at the locations and asked several patrons about their experiences at the park.

“They said at times parking was tight,” Payne said. “If approved, I think we should have some mitigations in place for parking overflow and such.”

The group said they had a favorable opinion about the parks and said they were less obtrusive than expected.

“Do I know exactly what it will be like? No I do not,” McNelly said. “Do I have a good feeling about what I saw and what it could be? Yes, I do after being there and seeing this.”

Williams resident Walter Knox encouraged the council to consider a different location for the coaster park.

“I have been coming to Williams over 50 years and it was always my dream, since I was 15 years old, to live up here,” he said. “Seven years ago I fulfilled that dream, I retired and moved up here. I don’t live close to the subdivision, but one of the things that made me want to move here was the people.”

Knox said he doesn’t believe the park should be placed next to residences.

“I urge you not to allow them to move into the neighborhood,” he said.

Pine Street resident Chris Sanders said she hoped the councilmembers would reach out to residents throughout the city, not just those on Pine Street.

“I would encourage you also to consider to engage with all of members of the community when it comes to the Canyon Coaster Park,” she said. “It is not only the residents of Pine Street that are against the project, many long-term members of this community have voiced their concerns.”

The Williams City Council will hold a third and final reading of the proposed rezoning at its Feb. 11 meeting