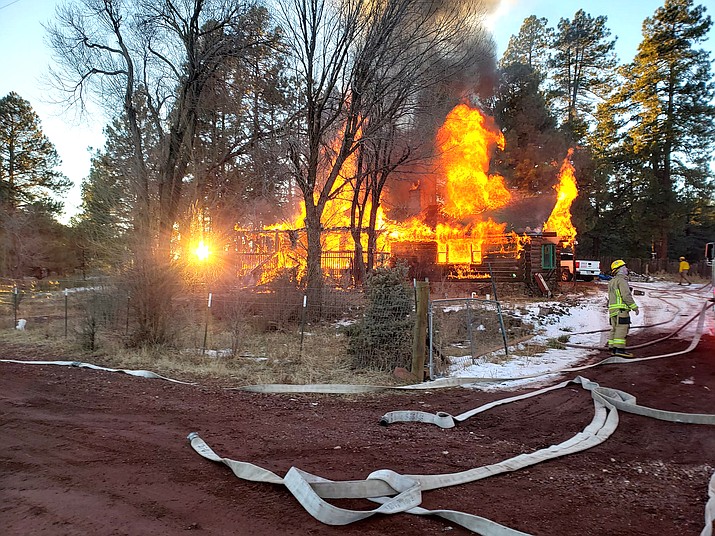 While firefighters were able to extinguish the blaze, the home itself was a complete loss and a nearby vehicle sustained heat damaged.

According to Ponderosa Fire District Chief Lee Antonides, the home was unoccupied at the time of the blaze.

“When we pulled up there was a neighbor standing outside and we asked if the home was empty. They said nobody was home at that time and due to the conditions — the amount of fire and the rapid growth of it, we did not make entry,” he said.

Antonides was first on-scene, having noticed the fire from his own residence.

“I noticed the column of smoke from my home so I called our station to see if we had any residents burning brush or anything. We did not, at least nobody had called in, so I started in that direction and while they (Pondersoa Fire) were en route somebody else called 911 and we were toned out for it,” he said.

Ponderosa Fire responded immediately from their station in Bellemont.

“According to our dispatch report, when they toned us out we had roughly a one minute response time because we were just turning down the street when they received the first 911 call,” Antonides said.

Upon arrival, the department used a defensive attack — extinguishing the fire from the outside, since the home was already 70-80 percent consumed. A request for mutual aid was also made.

“We requested mutual aid once we knew what we had going on,” Antonides said.

“We definitely want to thank all of our mutual aid partners that responded,” Antonides said.

According to Antonides, the cause of the fire is still under investigation.

“All we know is it appears to have started toward the rear of the home,” he said. “Whether it was inside or outside, we can’t determine that at this point.”

Antonides said he believes the home was a private rental.

“I believe the individual has been there for quite a while so they’re just renting it from someone, as far as I know… I would say they probably lost everything but the clothes on their back and the vehicle they were driving,” he said.

A GoFundMe has been set up for Kevin Roth, who, according to the site, resided in the home.

“Kevin Roth suffered a devastating loss tonight. His beloved dogs, Hank and Ben, and everything he owned,” the site stated.

Ponderosa Fire reminds the public to check the batteries in their smoke and carbon monoxide detectors and to have an escape plan in place.

“The biggest thing right now is that families need to have their exit drills for any evacuations for fire or anything else. With the season upon us with extra lights and holiday decorations, fire safety is paramount,” Antonides said.

To donate to the GoFundMe visit https://www.gofundme.com/f/92p7g-heartbroken.